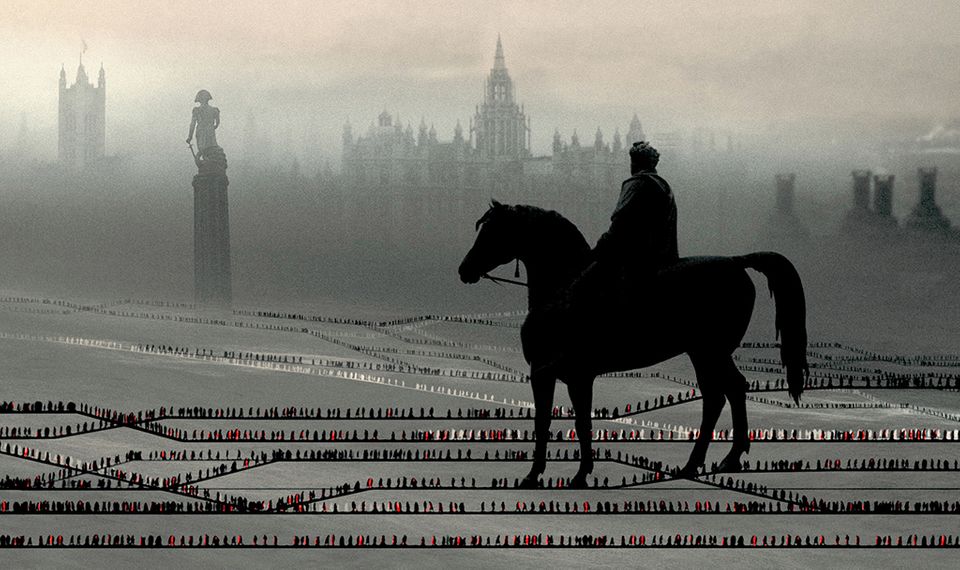 The Israeli artist Michal Rovner has captured the frenetic pace of London, its monuments and foggy landscapes in her new video work that was unveiled at Canary Wharf’s Crossrail Place yesterday.

Transitions depicts the Canary Wharf business district, Nelson's column, Tower Bridge and the Houses of Parliament above multiple, intersecting lines with endless streams of people, representing individuals walking to work and commuting to the city. On closer look, one also sees people walking their dogs and a monumental, nocturnal figure alluding to stilted characters at Trafalgar Square.

Standing in front of the 16m-long looped video, Rovner says: “I never thought I would make such a big still-life, a portrait of the city. Are we aware of these lines of energy that are constantly passing through, so vividly, so fast, so powerfully, so intensely underneath the ground—this undercurrent of the city that adds another layer of time?”

The looped composition portrays a 24-hour portrait of London, from pale, misty morning with black lines of bodies, to an acceleration of density and movement when the bodies become red, then white lines of bodies against the city at night. Rovner had imagined a grid of train lines, reminiscent of a tube map, onto which she set up a “theatrical stage” of movement.

Rovner, 61, says: “I stood on a roof terrace of one of the Canary Wharf banks and noticed that people going to the station are very motivated to get somewhere fast. I took pictures in around seven locations of a lot of architecture and monuments but only a few made it into the piece because I didn't want to overload it but make some kind of summary with a few brushstrokes.”

Co-funded by Canary Wharf Group and the City of London Corporation, Transitions was commissioned for the Canary Wharf Elizabeth line station with support from Pace Gallery. A smaller video called Afterlight (2019), featuring elements from Transitions, is on show at Pace's stand at Frieze London.

This is Rovner’s second public work for a train station, following Passages (2015) in Naples. Her other works include a permanent piece portraying the Jewish world before the Holocaust at Yad Vashem, the World Holocaust Remembrance Center, in Jerusalem.

Transitions is one of ten works being installed at seven of the new Elizabeth line stations as part of the Crossrail Art Programme. Besides those already completed, Yayoi Kusama and Conrad Shawcross are creating works outside the ticket halls of Liverpool Street (Broadgate) and Liverpool Street (Moorgate) respectively.