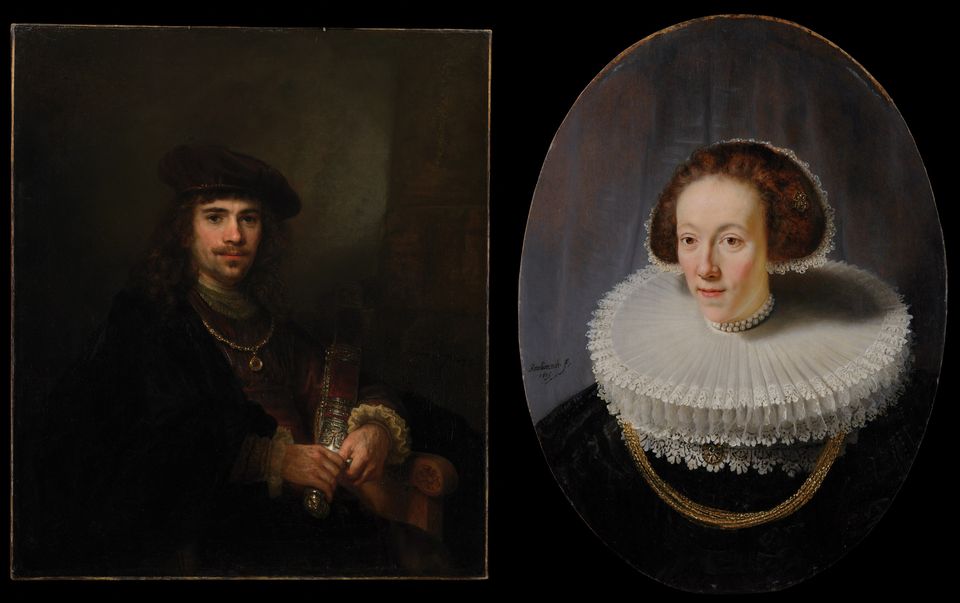 The Leiden Collection, owned by the US billionaire Thomas Kaplan and his wife Daphne Recanati Kaplan, has unveiled two paintings newly attributed to Rembrandt at the Rembrandt House Museum in Amsterdam. The Special Guests display, which opened last month, marks the return of the Portrait of Petronella Buys (1635) and Man with a Sword (around 1640-44) to the Netherlands for the first time in a century.

The Portrait of Petronella Buys is a wedding pendant to Rembrandt’s Portrait of Philips Lucasz (1635) at the National Gallery in London. Despite earlier concerns over its loose style, the London portrait is firmly attributed to Rembrandt. He signed and dated both works. Researchers compared the sitters’ collars, foreheads, eyes and chins, finding the same assured brush-strokes in each.

One theory is that Rembrandt was working fast to meet a deadline. A copy of the couple’s marriage certificate shows that they wed in late 1634. Rembrandt had to complete both portraits before May 1635, when they sailed for Batavia. The works remained with Petronella’s family in Amsterdam.

Since 1970, some scholars have doubted that Man with a Sword is by Rembrandt. After restoration and new research, the painting has been attributed to the master and one of his students. Analysis showed that the canvas was primed with a mixture of river clay, sand and oil. Rembrandt first used this ground for The Night Watch in 1639. The pigments in Man with a Sword also correspond to those used by Rembrandt.

Infrared and roentgen photography revealed the original composition was quite different. An unknown student left the face and a few other areas intact, but added a beret, chain, medallion, cape and sword. Craquelure on Rembrandt’s signature suggests that it was part of the earlier work. The painting was compared with others from the same period, including Rembrandt’s Self-portrait in a Flat Cap (1642) in the Royal Collection.

It is now believed that Rembrandt painted a specific person, perhaps a client who died or refused to pay. Turning the unsold portrait into a "tronie", a study, made it sellable again.

The pair of portraits will be on view at the Amsterdam museum until 2 September. In early 2019, they are expected to travel to Louvre Abu Dhabi, the last venue to host a major exhibition of the Leiden Collection’s Dutch Golden Age masterpieces. Launching the international tour at the Louvre in Paris in February 2017, Kaplan said the planned Abu Dhabi show was “my dream Rembrandt exhibition”.