Life lessons: what the art market learned from 2018 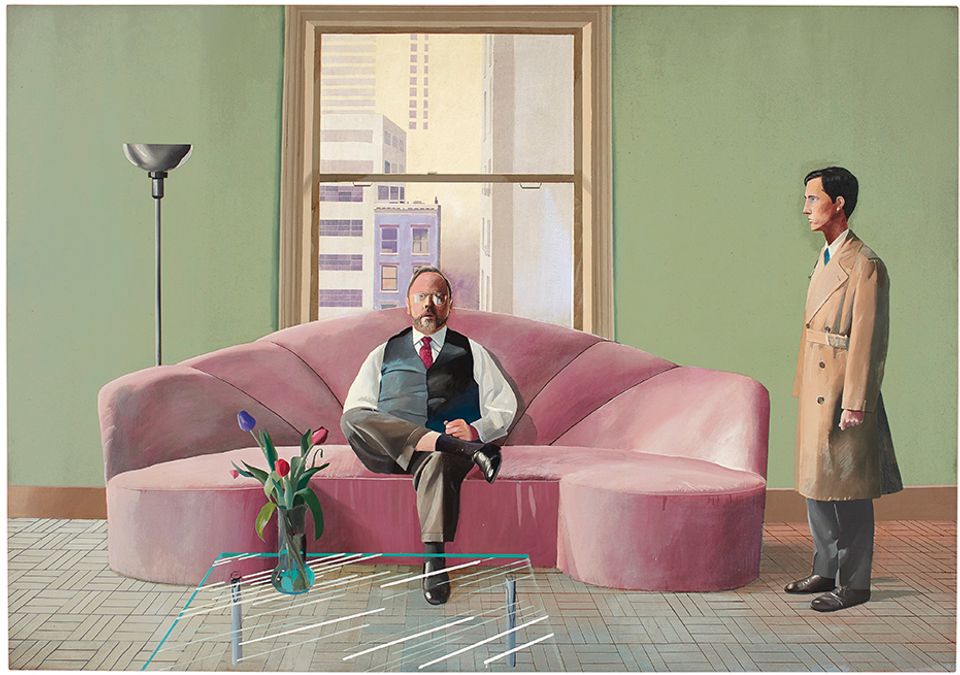 A 1969 portrait of Henry Geldzahler and Christopher Scott by David Hockney, who became the world’s most expensive living artist last year. Courtesy of Christie's

At the end of 2018, I brought together three leading figures to discuss the year in the art market for The Art Newspaper Weekly podcast. Included were Francis Outred, Christie’s head of post war and contemporary art, who had just announced he was leaving the firm after a ten-year stint (but would not be drawn on his next move); the dealer Thaddaeus Ropac, who opened his fifth gallery, in London, in 2017 and Victoria Siddall, the director of all three Frieze fairs and about to add a fourth, in Los Angeles, being inaugurated in February.

The episode is available to listen on our website and wherever you usually listen to your podcasts, but what follows is an edited version of the discussion, accompanied by my comments as I reflect on the past twelve months and take my traditional peer into the future of the market in the coming year, with some additional thoughts from our art market editor, Anna Brady.

What, for each of you, was the most outstanding event of 2018?

Thaddaeus Ropac: The recognition of African American artists. You can see the change of interest on every level—from institutions and collectors, gallery shows, auction results. When I think 30 years ago the then director of the Centre Pompidou almost lost his job because of Magiciens de la Terre [the 1989 exhibition, showing 50% non-Western artists]! For so long, the art world was very European male-dominated—finally this has changed.

Francis Outred: In the auction business we saw some significant collections built over the last century come to market: for example, Rockefeller, Ebsworth and S.I. Newhouse. These examples have generated a lot of interest from new collectors.

Victoria Siddall: I was very happy to see the repositioning of women artists, both in the marketplace and institutionally. This has been growing over the past few years, but this year has felt particularly important. An example of that commitment was that the Frieze Tate fund bought a series of photographs by Sonia Boyce.

Georgina Adam: I think that the interest in African American artists, and in Africa as a new art region, can only be destined to grow, in particular because of the number of new museums—in the US and in Africa—devoted to this field. The same for female artists–women remain behind at the moment in terms of value and representation but I see the catch-up continuing, both in price and recognition, starting with younger primary market artists—but the trickle through to the top end of the auction market will take years. However, with the fast growth of any previously underappreciated market comes the risk of fakes. And let us not forget who still largely controls the market: the white European or North American male. 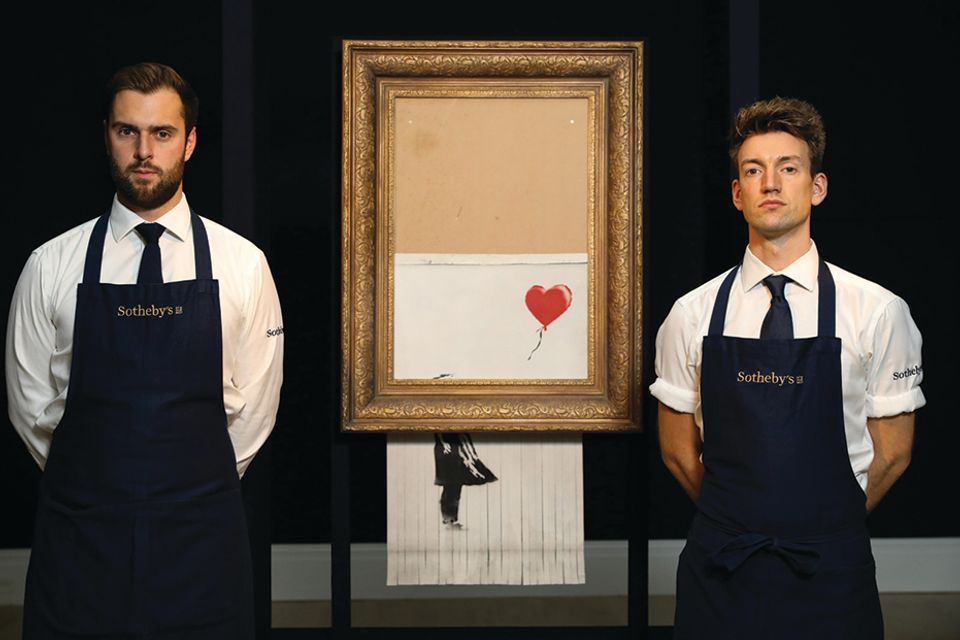 Banksy's Love is in the Bin (2018) ©Getty Images; Courtesy of Sotheby’s

VS: The spirit and resilience of London in the face of Brexit and the palpable international feeling and buzz around Frieze Week, which was immensely reassuring (certainly for me!).

TR: Most unexpected for me was how the art world became caught-up in the #MeToo movement—I thought it stood above these problems but it turns out the art world was part of it too. I always hope the world will become a better place but I think it’s important to judge someone before finding them guilty; the handling is delicate and there is a danger of overdoing it.

GA: Interestingly, no-one mentioned the shredded Banksy. However, I feel that such “events” and the “experience culture” will continue to impact on the art world, a move away from static art and towards immersive installations and art-ertainment—both of which speak to the luxury and fashion brands that are injecting serious capital into art.

Anna Brady: Interesting, too, that Thaddaeus was surprised by #MeToo allegations in the art world—a competitive (and sociable) industry where men still hold the majority of higher positions has created fertile ground for abuses of power over the years.

How do you see the fair landscape evolving?

VS: We do hear from galleries that there are too many of them. So when we launched Frieze LA we took the decision to keep it small—only 70 galleries compared to nearly 200 in New York—but the response was overwhelming. I think the appetite is still here for something fresh and exciting. As organisers, we have to work harder to achieve this.

GA: I think fair growth has peaked and we will see further polarisation of art fairs into a few big events and then small niche ones, and some attrition. The decision of MCH Group [the parent company of Art Basel] to abandon its regional fair initiative is significant, as is the disappearance of some mid-level galleries—which are, after all, the clients of the fairs. Several fairs, including Frieze and Art Basel, introduced sliding scales of stand pricing in 2018 to help smaller galleries—I suspect we may see more of those initiatives. But galleries will have to be more selective about the fairs they do—the current pace is unsustainable. 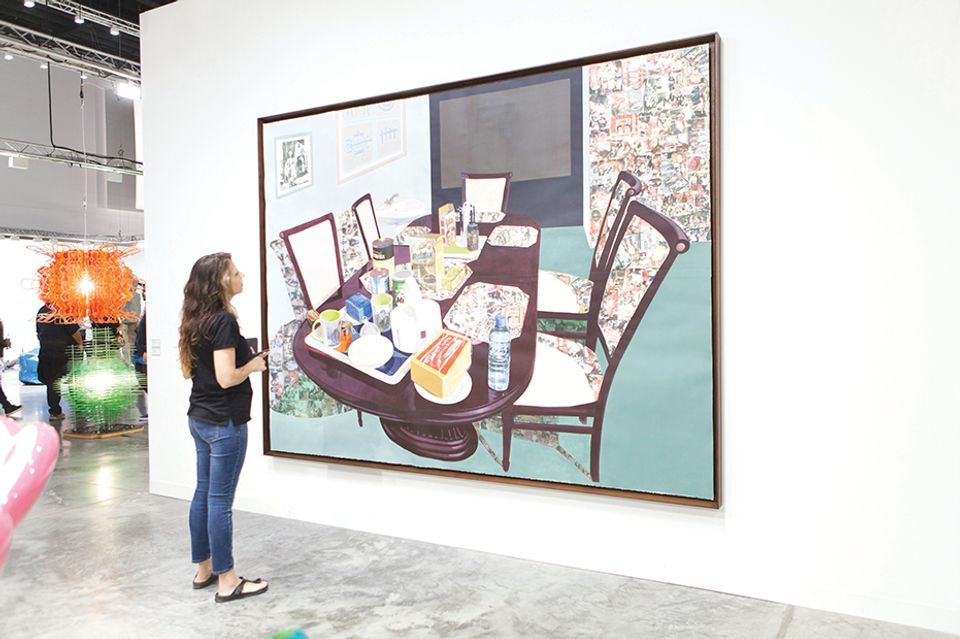 What are you seeing in the way of new collectors?

FO: Asia has been a very predominant growth field, particularly for post war [art] in the last six to seven years. Impressionist and Modern art took longer but Asia is now also taking over here—in some of our sales, 30% has gone to Asia. Mainland China and the Middle East are very active; Latin America was strong, but is less strong now. And we are beginning to think of Africa. I was in Shanghai in September, where the West Bund was an area of deserted land, which is, or soon will be, home to at least five museums—this shows the growth of interest. You’re seeing that in the marketplace—the growth of interest in artists such as George Condo and KAWS is really driven by young Asian collectors.

TR: Collectors are becoming more sophisticated and educated. People always feel the art world is becoming much shallower and the investment aspect is taking over, but I really feel this is not the case. For a long time, we felt that Asian collectors understood the market but not the art world, but they are learning. We were caught by surprise at the beginning of 2018 when the new How Art Museum [in Shanghai] opened with an exhibition of Joseph Beuys—we represent the estate, [but] were not contacted. It was a modest show, but doing something so sophisticated was astonishing.

AB: A presence in Asia is becoming a pre-requisite for major blue-chip galleries, but the Chinese economy is undeniably cooling off. President Xi Jinping’s stringent regime, with rising censorship and internet and social media controls, could prove a barrier to artistic freedom and, potentially, market growth. As for Africa, there has been a lot of talk but little action: some are dipping their toes in the water, but for the international art world, this remains largely uncharted territory—for now.

VS: Speaking at the end of 2018 as we are now, it would be great to think the government knew what would happen for Brexit, let alone us. But London feels like an incredibly international city that can withstand this change. We’re still seeing galleries from outside the UK opening in London, such as Thaddaeus or Max Hetzler, who just opened. It shows great confidence in the city and long may that last.

TR: I think the art world left geo-political borders a long time ago. Politics and borders don’t exist for artists, for curators, for collectors, so I think we are in a very privileged world. [In London] you have so many important artists coming here [to live] still, academies influencing the new generation of artists and the museums are among the best in the world. I am upset that the UK is leaving the idea of a united Europe, but London as an art world, and as a market, will survive this.

FO: You cannot see Brexit in isolation. It is part of a number of things happening around the world at the moment: the China-America trade war, the destabilisation of the Middle East, and the changes in China under President Xi Jinping. These will have an impact on where people live and work and decide to spend their lives. Whatever I think about Brexit, actually it could boost London, depending on what is negotiated.

GA: I hope our panellists’ optimism is right. Until the terms of a deal are known, it is difficult to predict, but I see real problems, particularly for smaller galleries, with additional paperwork for exporting to the EU.

AB: As Francis says, global politics are polarising, with authoritarian regimes rising from the far-right in Brazil to the communist in Beijing. Even if, as Thaddaeus says, the art world is immune to geo-political borders, we will all be affected by the troubling new world order. Meanwhile, Tad Smith, Sotheby’s chief executive, warns of a “more subdued” market in 2019 and Sotheby’s profits were stung last year thanks to two over-guaranteed works—there may well be more fall-out from aggressively negotiated guarantees to come. There are signs of increased caution and cut backs, with some senior auction staff who left at the end of last year (such as Loic Gouzer) not being replaced. Battening down the hatches, perhaps.