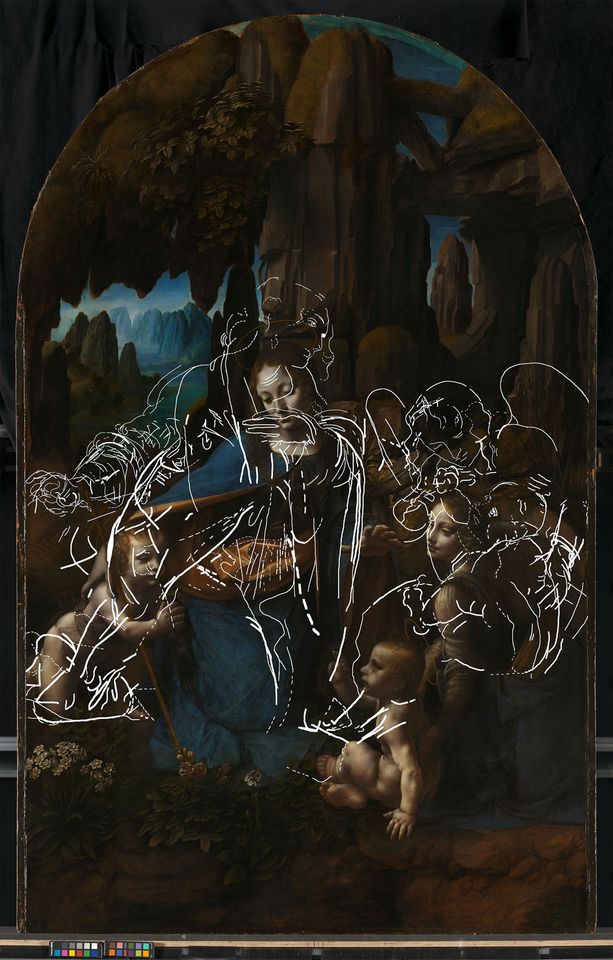 The Virgin of the Rocks with white lines indicating the underdrawing for the first composition © The National Gallery, London

London’s National Gallery will present an “immersive experience” on Leonardo’s The Virgin of the Rocks, opening on 9 November. This will reveal the results of a scientific investigation into the painting, showing how the composition evolved.

Leonardo, who was notoriously slow in finishing his pictures, worked on London’s The Virgin of the Rocks in two campaigns, initially in around 1491-99 and later in 1506-08. An earlier examination in 2005 revealed that the pose of the Virgin had been changed, but there were then only hints about other alterations. Using the latest techniques (macro x-ray fluorescence maps and infrared and hyperspectral imaging), zinc in the drawing material now makes it possible to see more of the changes.

In Leonardo’s first composition, the infant Christ and the angel were originally higher up in the composition, with the angel looking more downwards at the baby Jesus. Why the artist abandoned this idea remains unclear, but a later underdrawing has also now become apparent. Although much closer to the eventual composition, Leonardo subsequently made final refinements. For instance, the angle of the infant Christ’s head was changed so that he is now seen in profile and parts of the angel’s curly hair have been removed.

The Virgin of the Rocks will be moved from the gallery’s main floor to the lower level, where there will be an adjacent immersive presentation, organised by the company 59 Productions. This will take up all of the lower floor galleries, other than the room with the secondary paintings.

Caroline Campbell, the gallery’s director of collections, says that “much of our research takes place in closed studios, laboratories and libraries”, so this project will offer the public a chance “to explore and engage with what we have found”.

Although the National Gallery regards The Virgin of the Rocks as a fully autograph Leonardo, some specialists believe that assistants may have done parts of the landscape.

The presentation confirms that the National Gallery will not be lending The Virgin of the Rocks to the Louvre’s forthcoming major Leonardo exhibition. There is another version of the same subject, painted in 1483-86, and now owned by the Louvre—and this will be a key work in the Paris exhibition (24 October-24 February 2020).