Specialists put the past behind them for celebratory exhibition

While new art galleries seem to pop up (and down) at an alarming rate these days, the Fine Art Society stands proud as a gallery that opened in 1876 in the same New Bond Street, Mayfair townhouse where it operates today. Originally founded by collectors as a print and publishing business, the popular response to its fine art exhibitions pulled the gallery into a different direction, says Gordon Cooke, its director of 19th- and 20th-century prints. He cites an 1881 exhibition of works by Millais that pulled in 40,000 visitors: “a decent turnout for a football match”.

The ride hasn’t always been easy and in recent years the gallery, which represented artists such as James McNeill Whistler and Samuel Palmer in the 19th century, has struggled to retain staff and significance in the fast-moving, high-octane art market that now surrounds it. Senior level departures in recent years include the directors Patrick Bourne and Robert Upstone, while chairman Angus Grossart stepped down in March and has been replaced by Robin Holland-Martin, previously a non-executive director of the gallery.

Cooke says that supporting living artists remains central to the gallery’s programme but its push into the contemporary art field has been stop-start since Toby Clarke left in 2011 (to found London’s Vigo Gallery). Specialists including Kate Bryan and her replacement Lee Cavaliere left rather soon after they began. Pippa Stockdale, who became the Fine Art Society’s managing director earlier this year, says that things are stabilising in this area, however. Her background at Bonhams auction house includes working in contemporary art and she and Sara Terzi, the gallery’s newest contemporary art specialist, have already signed up a new artist: the Lebanese painter, sculptor and architect Nadim Karam will have his first show in their London space in 2017. 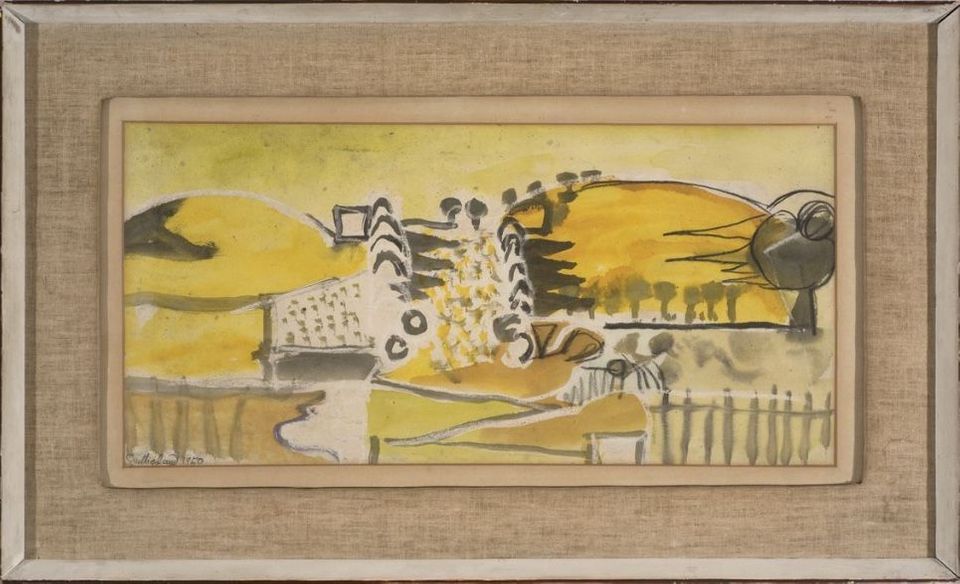 Graham Sutherland, Study for Origins of the Land, 1950

The gallery has also put its best foot forward for an exhibition that opens today (7 June-7 July) to mark its 140th anniversary. The Fine Art Society: A Celebration stretches from Palmer’s meticulous prints and paintings (including the watercolour Going to Evening Church (1874), £385,000) to the 2016 Compassion series of photographs of the Dalai Lama by Chris Levine (prints begin at £750). Other artists in the show include Whistler, Eric Ravilious and Alfred Gilbert, whose bronze Eros is offered at £330,000 (including VAT).

The gallery’s Edinburgh space—which was first opened between 1973 and 1992, and was then re-established as part of the business in 2004—presents a coinciding Signatures of Scottish Art exhibition (10 June-9 July).

The Fine Art Society was founded as a limited company and is now a PLC with around 140 shareholders, including descendants of its original investors.