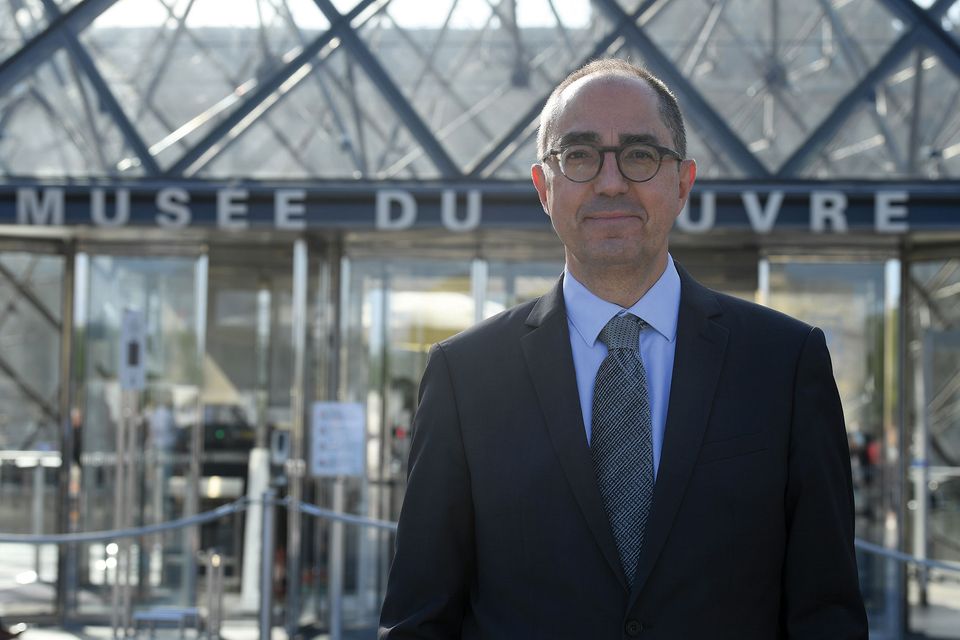 Jean-Luc Martinez is seeking a third term as president-director of the Louvre, vying with half a dozen candidates for the coveted post Photo: © Pascal Le Segretain/Getty Images

The reappointment of Jean-Luc Martinez for a third stint as president-director of the Musée du Louvre looked like a shoo-in. Then things got complicated.

In France, the state exerts direct control over cultural institutions, and their executives are selected behind the scenes by government. Each succession brings its share of intrigues, but Martinez has a strong track record, with eight years under his belt. He is also known to have the support of the culture minister, Roselyne Bachelot.

However, longstanding opponents and would-be candidates to the top job at the Louvre have unleashed what Le Figaro newspaper described as “a downpour of stink-bombs” in recent weeks. At the 11th hour, the government is considering changing tack and launching an open competition for the post, as Martinez’s contract expires in April.

At least half a dozen candidates are believed to be in the running, including the heads of the Guimet, Picasso and Petit Palais museums in Paris, and even Martinez’s colleagues—the chief curator of the Louvre’s paintings department and the director of the Louvre-Lens outpost. After an initial selection by Bachelot, the final decision will fall to President Macron in mid-April.

Even when Martinez was first appointed director in 2013, he was welcomed with mixed feelings. He had joined the Louvre as a curator of Greek sculpture in 1997 and a decade later rose to lead the Greek, Etruscan and Roman antiquities department. But sceptics queried the choice of an archaeologist as the head of an institution dominated by art historians.

Nor did he have the support of his predecessor, Henri Loyrette, the son of a grand Parisian family of entrepreneurs and lawyers. Aside from a 2019 retrospective celebrating the 99th birthday of Pierre Soulages, Martinez distanced himself from Loyrette’s policy of contemporary art shows at the Louvre, considering it primarily a “classical museum”. His management style ruffled feathers.

Having inherited an institution with impressive exhibitions and projects abroad but declining visitor conditions at home, the new director steered the Louvre in a less prestigious direction. The museum was overcrowded with visitors, which surged to a record 10 million in 2018, with endless queues, no online booking system, signage and labels in French only and a plague of pickpockets. Starting with the entrance hall under I.M. Pei’s landmark glass pyramid, Martinez allocated €50m to €60m a year—a quarter of the €240m annual budget in 2019—to renovate almost half the Louvre’s 86,000 sq. m of public spaces. The process continues today. 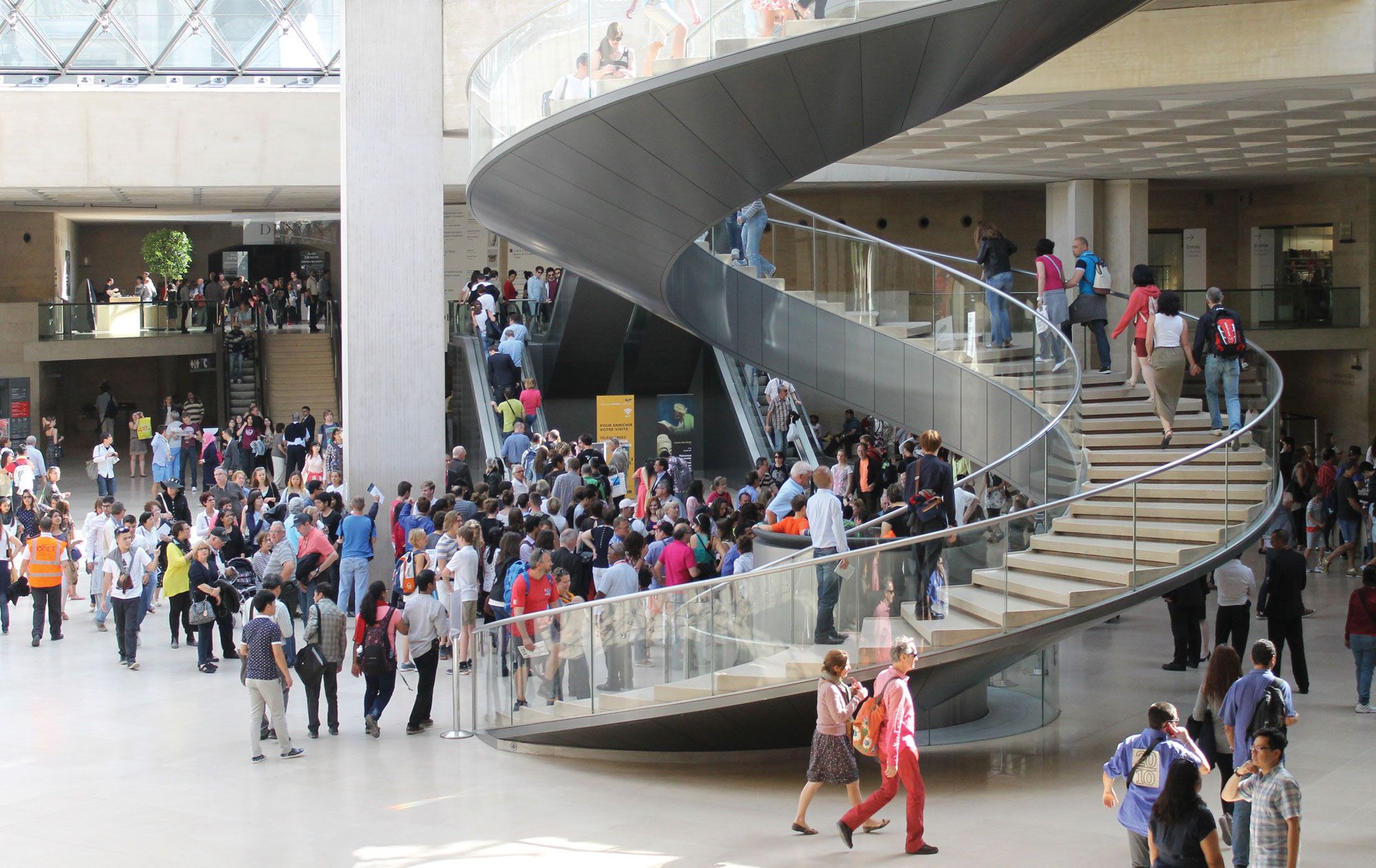 After the river Seine flooded in 2016, forcing the evacuation of hundreds of works from the Louvre’s underground storage sites, Martinez set in motion a massive relocation of the collections to a new 10,000 sq. m conservation centre 200km north of Paris, near the Louvre-Lens. When curators protested at the distance, Martinez reminded them that the museum had spent years searching for a suitable space near Paris.

Further afield, Martinez authored a 2015 report on the protection of cultural heritage against trafficking and terrorism. It was presented to the G7 after the Isis attacks on Palmyra and Mosul. Assisted by Jean-François Charnier, he also delivered the €10bn Louvre Abu Dhabi project, which had been on the verge of collapse, with the Emiratis exasperated by perceived French arrogance.

Convinced that provenance research should be a key priority for museums, Martinez appointed a scholar in January 2020 to co-ordinate research on the Louvre’s vast collections. Last week, the museum launched a new online collection catalogue covering around 485,000 records drawn from dozens of previously inaccessible databases. These include more than 1,700 works recovered in Germany after the Second World War, known as Musées Nationaux Récupération, that have been entrusted to the Louvre until they can be returned to the descendants of their rightful owners.

The museum, which currently has 35,000 objects out on loan nationally, is also planning to open exhibitions of its Islamic works across 18 cities this November, at a time of rising Islamophobia in France.

For all Martinez’s achievements, signs of revolt emerged in February, when the Cy Twombly Foundation sued the museum over a renovation of the Salle des Bronzes, whose ceiling bears a monumental painting executed by the late Twombly in 2010. The foundation claims the refurbishment uses “aggressive colours and cheap materials” and represents a breach of the artist’s moral rights. Remarkably, the lawsuit received the support of Loyrette, who testified in court that “nothing is left now of the artist’s work”. The Louvre insists Twombly’s painting has not been touched and argues that the artist’s rights do not apply to the rest of the gallery. 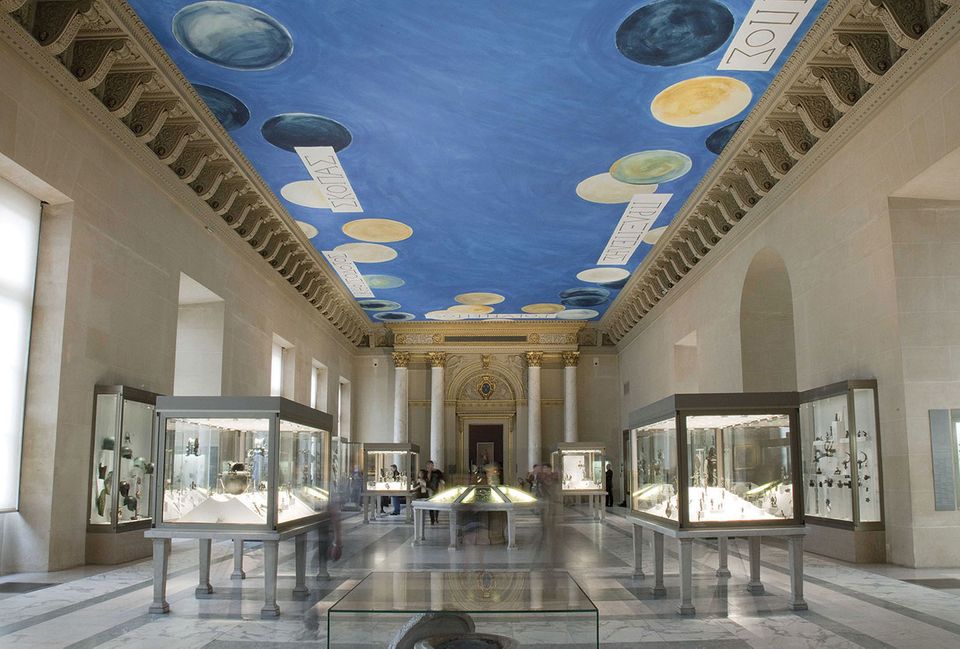 Some journalists and scholars also criticised the aesthetics of the renovations. Breaking with the pale stone walls of past decades, the architect Michel Goutal chose a deep red that evokes the opulence of 19th-century France. A prestigious Parisian designer, speaking anonymously, deplores “a fake Napoleon III style”.

On top of all this, the museum has drawn criticism for its costly acquisition of questionable drawings and a worn-out Tiepolo fresco, Juno in the Midst of Clouds. The latter, purchased last year for €4.5m from London-based dealer Pier Franco Grosso, received €1.5m in support from the museum’s patrons group, the Société des Amis du Louvre. 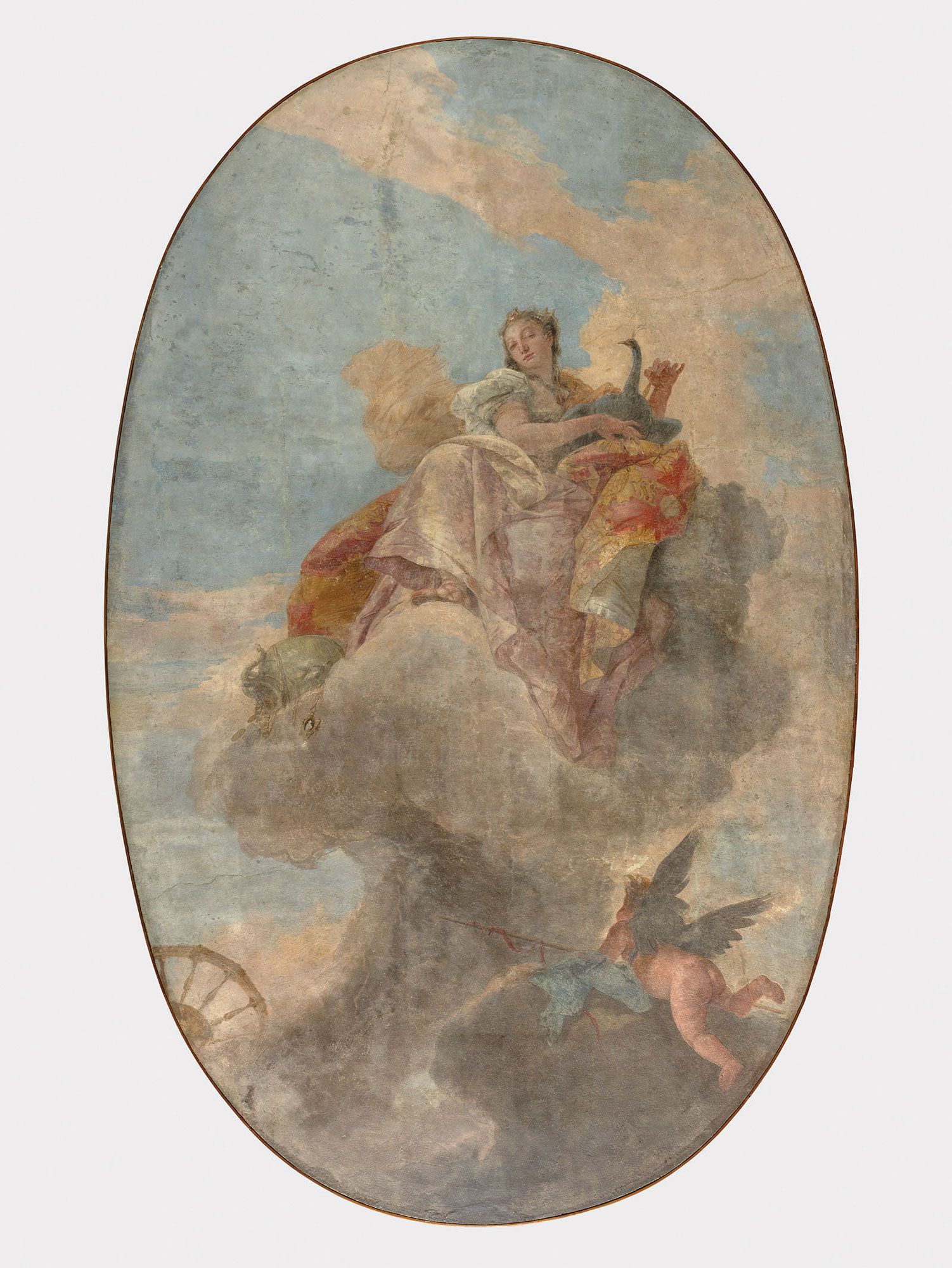 The Louvre is also under fire for seeking to offset its lockdown losses with a flurry of commercial partnerships with brands such as Uniqlo, Lego, Dior, Cartier and Swatch, as well as the decision to rent out its galleries for the filming of the Netflix hit Lupin and Beyoncé & Jay Z’s 2018 Apeshit music video. A limited series of the DS 7 Crossback car, retailing at €57,000, comes with the Louvre logo.

In a recent article in the French edition of The Art Newspaper, Jean-Michel Tobelem, an associate professor at the Sorbonne University, denounced the “Instagramisation of the museum” and called for a “change of leadership”. He questioned whether Martinez’s “interest in monetising the Louvre’s artistic assets” tarnishes the museum’s reputation. “It is no longer the curators (let alone the educators) who are in charge, but rather the communication and branding executives in search of ‘hits’ that will guarantee the museum’s presence in the media and on social networks,” Tobelem wrote. 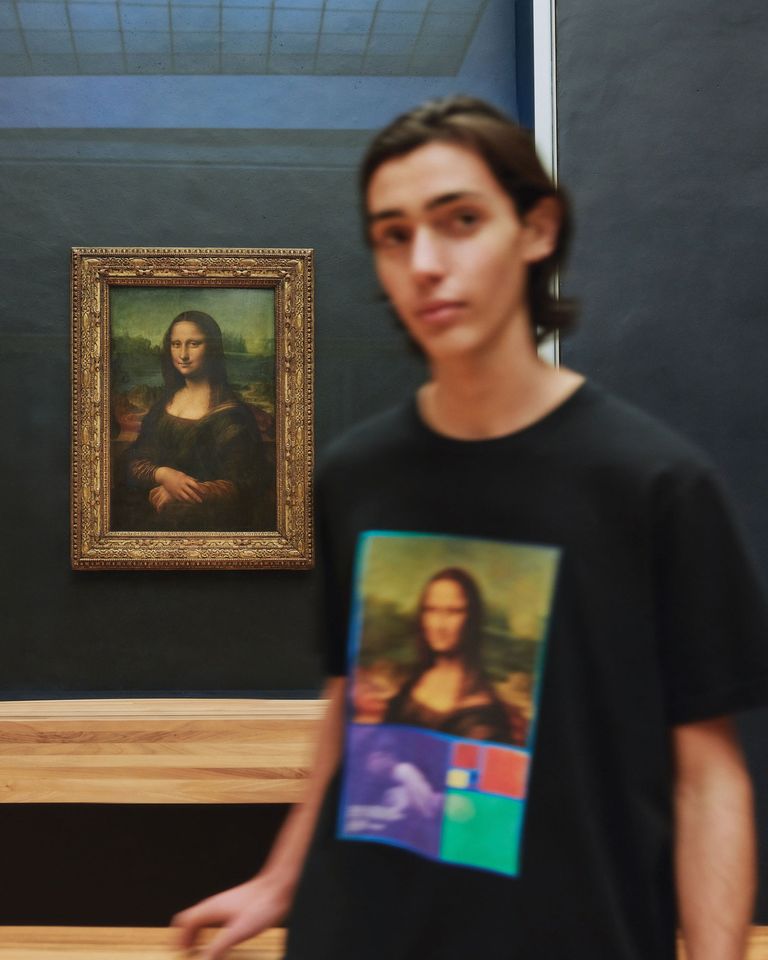 Commercial partnerships with brands such as Uniqlo have sparked criticism Photo: © UNIQLO

Martinez’s response has been to point to the 237 million views that the Beyoncé and Jay Z video has received on YouTube and the 10 million social media followers the museum now boasts. More than half of the Louvre’s 9.6 million visitors in 2019 were under 30 years of age. But only a quarter of that number were French, and just 16% were from a lower socio-economic background.

Martinez is convinced that the museum is using the “necessary means” to reach a younger and more diverse audience in a country where culture is still largely the preserve of the elite.