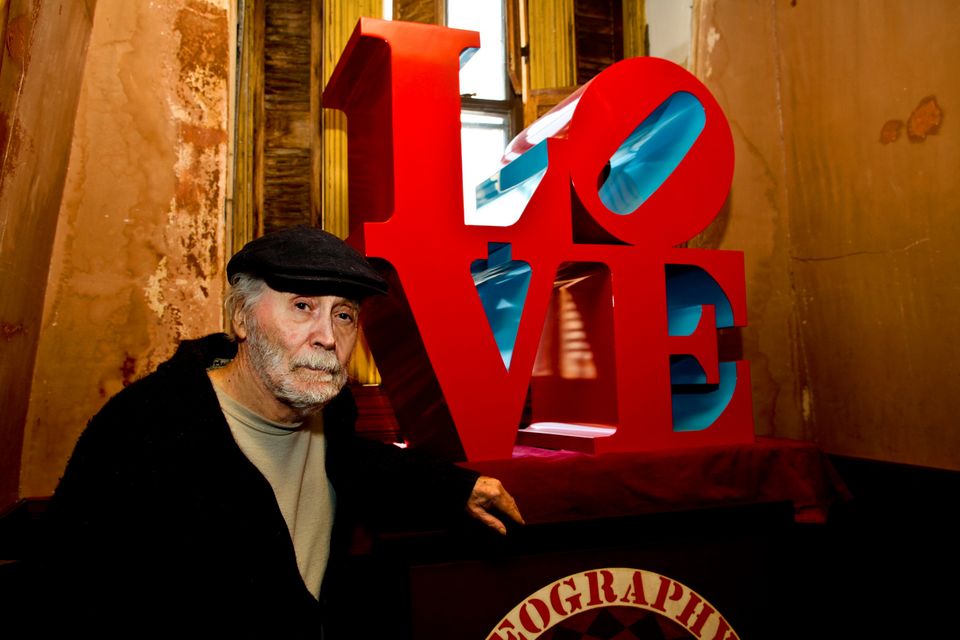 Robert Indian with one of his LOVE works at his home in Vinalhaven, Maine Joel Greenberg

The artist Robert Indiana, who became famous for his Pop art LOVE series, died at his home in Vinalhaven, Maine on Saturday, aged 89. Indiana moved to Vinalhaven in 1978 in what he described as “self-imposed exile” after being “blackballed” by the New York art world. We interviewed the artist at his home in 2012, ahead of his career-wide retrospective at the Whitney Museum of American Art, Robert Indiana: Beyond Love (26 September 2013-5 January 2014).

Indiana's career spanned some six decades and represented one of the most striking engagements with the legacy of the early American avant-garde, particularly the work of Charles Demuth, Stuart Davis, and Marsden Hartley, whose pictorial language he translated and updated for the 1960s into sculptures and paintings that were likened to road signs and pinball machines.

Born Robert Clark in Newcastle, Indiana in September 1928, Indiana's childhood was unusually mobile. His parents, Earl and Carmen Clark, moved so frequently that the artist claimed to have known 21 different homes before the age of 17. "It seemed that half my life was spent in the automobile," he recalled in a 1963 interview with Richard Baker. "We were always driving some place for something." The roadside culture, ads and signs that became familiar to him in those years would later feed into his graphically sharp art.

In the 1930s, his father Earl pumped gas and later held an administrative position at Phillips Petroleum Company; memories of the neon Phillips 66 sign became firmly etched on the young Indiana's brain. He called it "the one most fascinating visual object in my entire youth because I saw that sign for years and years and years. This was a very large construction which probably was about ten stories high [and] towered over a Phillips '66' gasoline station."

He later served in the Air Force, attended the School of the Art Institute of Chicago, the Skowhegan School of Painting and Sculpture in Maine, and the University of Edinburgh and the Edinburgh College of Art in Scotland. Upon his arrival to New York in the 1950s, the artist became a friend and lover of Ellsworth Kelly, who helped him find a studio at the fabled Coenties Slip, a warehouse near the Brooklyn Bridge. He soon adopted the name Robert Indiana, after his birthplace, and apparently because there were legions of New York artists with the family name Clark.

In 1962, Eleanor Ward hosted his first solo exhibition at Stable Gallery. Two years later, Indiana created his first LOVE images, which were produced as a Christmas card design for the Museum of Modern Art in New York, and the US Postal Service introduced the image as a postage stamp in 1973. "LOVE bit me. It was a marvelous idea, but it was also a terrible mistake," the artist told National Public Radio in 2014, the year of his Whitney Museum retrospective. "It became too popular; it became too popular. And there are people who don't like popularity. It's much better to be exclusive and remote. That's why I'm on an island off the coast of Maine, you see."

The artist’s death came the day after a lawsuit was filed over his legacy in a Manhattan court by the Morgan Art Foundation, Indiana’s representative for many years. It claims that his current caretaker and assistant, Jamie Thomas, and an art publisher, Michael McKenzie, isolated the artist from friends and produced dubious works in his name over the past two years. Thomas and McKenzie have said they were fulfilling Indiana’s wishes in keeping visitors away and he authorized all the news works that they created. The case throws a cloud over what will happen to the artist’s estate, including his meticulously kept archive which the artist told us he expected to donated to the Farnsworth Museum in Maine. “They have been kinder to me than anybody in New York,” he said.