Infrared scans indicate that the phrase, "Can only have been painted by a madman", matches the artist’s handwriting Edvard Munch's The Scream (1893) has an inscription in the top left corner Photo: Borre Hostland. Courtesy of the National Museum of Norway

A small inscription scribbled in pencil in the top left hand-corner of Munch’s The Scream (1893) was made by the man himself, says a Norwegian scholar who has reassessed the celebrated painting. Mai Britt Guleng, the curator of Old Masters and modern paintings at the National Museum of Norway in Oslo, says that the graffitied Norwegian phrase—"Can only have been painted by a madman"—was added by Munch, rather than a vandal, around two years later.

The artist painted four versions of The Scream between 1893 and 1910; the version owned by the national museum is the only one bearing the mysterious inscription. The painting, which has come to symbolise angst in the modern age, has undergone conservation prior to going on show in the museum’s new building, due to open in Oslo next year.

An infrared scan of Munch's The Scream shows the writing in greater detail Photo: Borre Hostland. Courtesy of the National Museum of Norway

As part of the research process, Guleng and her team, including the conservator Thierry Ford and research librarian Lasse Jacobsen, analysed the handwriting using infrared technology, looking to Munch’s diaries and letters for confirmation. “There are several reasons why I feel sure Munch wrote the sentence himself. Firstly, the handwriting is identical. I have word by word and letter by letter compared the sentence in The Scream with his handwriting in other notes and letters,” Guleng tells The Art Newspaper.

“My former colleagues at the Munch Museum, where I was the project manager of the digital archive of Munch’s writings, have come to the same conclusion. Had this been an act of vandalism by another person, the size of the letters would probably have been larger and the whole text more striking when you stand in front of the work. Munch also did not paint over it to conceal it.”

The question of the writer’s identity has prompted numerous theories over the years. The art historian Gerd Woll suggested, for instance, in a Munch catalogue raisonné published in 2008 that the phrase was the work of a vandal. Woll told the New York Times that the new evidence from Guleng “strongly points to Munch himself as the writer”. 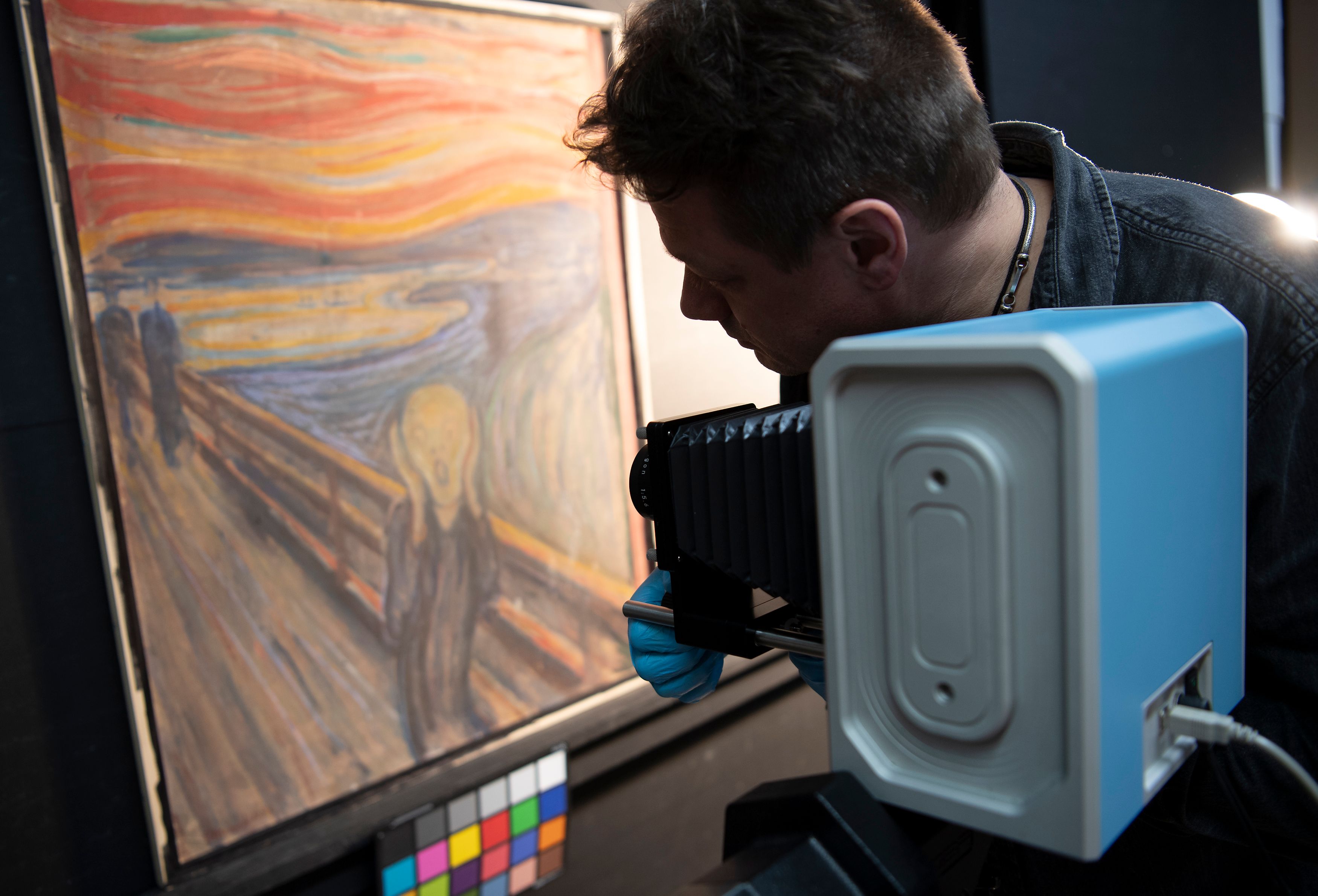 Infrared photographs of The Scream were taken as part of conservation work on the painting Photo: Annar Bjorgli. Courtesy of the National Museum of Norway

“There has been strangely little attention to the inscription, given that this is one of the world’s most researched and famous paintings. In the Munch literature, some researchers have taken it for granted that it was written by Munch, but they haven’t discussed why and when. From 2008 it has been generally accepted that the writing was made by another person, without any discussion at all,” Guleng says.

Munch may have added the sentence after he was confronted about his mental health by the medical student Johan Scharffenberg during a debate held at the Students Association in Oslo in 1895. “The evening was organised because of the negative reviews of Munch’s exhibition at Blomqvist Kunsthandel (Blomquvist Art Gallery) in Kristiania [later Oslo], that same autumn,” Guleng says. Munch, in turmoil, could have added the inscription shortly after.

Works by Edvard Munch will be on display in several galleries at the new national museum alongside pieces by other artists, says Guleng. “The large Munch room will be dedicated to his main works from the 1890s. In the Munch room the works will not be mounted in a strict chronological order, as most of them are from the same decade. Two works are the exception: The Sick Child (1885-86) and Self Portrait with the Spanish Flu (1919),” she adds.

Spanning 55,000 sq. m, the new national museum on Oslo’s waterfront will be the largest museum in Scandinavia. The cost of the new institution, delayed since 2020, is approximately NOK6bn ($700m), according to the Norwegian press.