'Manhattan advancing, Chicago unafraid': what to see at Expo Chicago

Expo Chicago opened its fifth edition yesterday on the Navy Pier. With 140 galleries participating, the fair is arranged in long strands with three clearings that provide open space, seating, and sites for a programme of installations organised by Diana Nawi, an associate curator of the Pérez Art Museum Miami. The standout piece is Rotunda (2016) by the Berlin-based artist Bettina Pousttchi, a 25ft-in-diameter photographic textile printed with fragments of architectural ornamentation that is suspended over the venue’s centre like an enormous and elegant lampshade.

One of the galleries flanking this space, New York’s David Zwirner, is showing a large Raymond Pettibon wave painting from 2010 with text that could be a fitting motto for the fair: “Manhattan rising, advancing—Chicago unafraid”. Kristine Bell, a senior partner at the gallery, said the work came to them on the secondary market and the text was serendipitous. 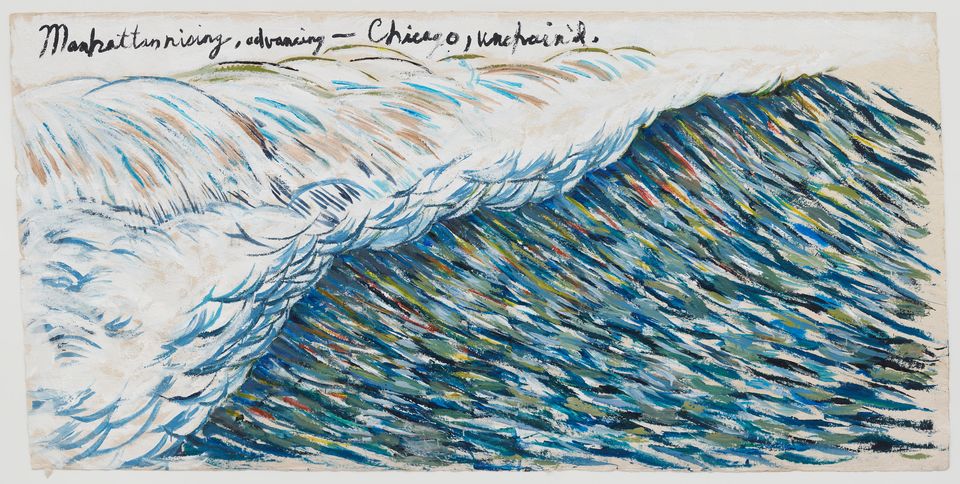 Nods to the local scene seem a strategic consideration on the part of many galleries, in fact. Rena Bransten Gallery from San Francisco has the work of two Chicago artists—the photographer Dawoud Bey and the sculptor John Preus, whose cubes function as seating and are made from salvaged materials source from Chicago Public Schools that were shut down. “Typically in Chicago, the collectors are very supportive of its own community,” said Trish Bransten, the gallery’s director.

While Alden Projects of New York has an eye-catching installation of objects by Roy Lichtenstein that include a maquette for a paper cup that was never produced, the gallery is also showing a small painting by the late San Francisco poet Kenneth Rexroth. Without prompting, its director Todd Alden said: “He attended the School of the Art Institute of Chicago.” Is that why he brought the piece to the fair? “Yes. Chicago would get it.”

Among the other highlights of the fair is a grand and poetic work by an artist who rarely shows in the US: the Arte Povera artist Claudio Parmiggiani at New York’s Bortolami Gallery. His untitled piece on wood, nearly 8ft high and 34ft wide, is a multi-paneled library created by smoke and soot.

Providing the de rigueur provocative punch one hopes to encounter at a commercial fair is Chicago’s Monique Meloche, which has Cheryl Pope’s 8ft by 6ft carpet—sized to fit a solitary confinement cell—printed with the words of an incarcerated youth: WHEN I GET OUT I AM GOING TO START BY BEATING SOMEONE UP.

A look at what is in store for next year’s edition came with the announcement that the Palais de Tokyo, the Paris-based contemporary art center, will partner with the fair in an off-site exhibition project in Chicago. Hors les Murs (Outside the Walls), organised by Katell Jaffrès, will also coincide with the second Chicago Architecture Biennial. No artists have yet been named, but representatives from the Palais de Tokyo met with Theaster Gates the day before.

With less than a year to work out the content, Expo Chicago’s director Tony Karman (who was awarded France’s Légion d’Honneur medal during the announcement) is optimistic. “The most perfect part is that it is not fully cooked,” he said.