Marc Quinn will display the blood of refugees and celebrities

The art project, involving frozen blood drawn from refugees and stars, is not a “spectacle”, says the artist 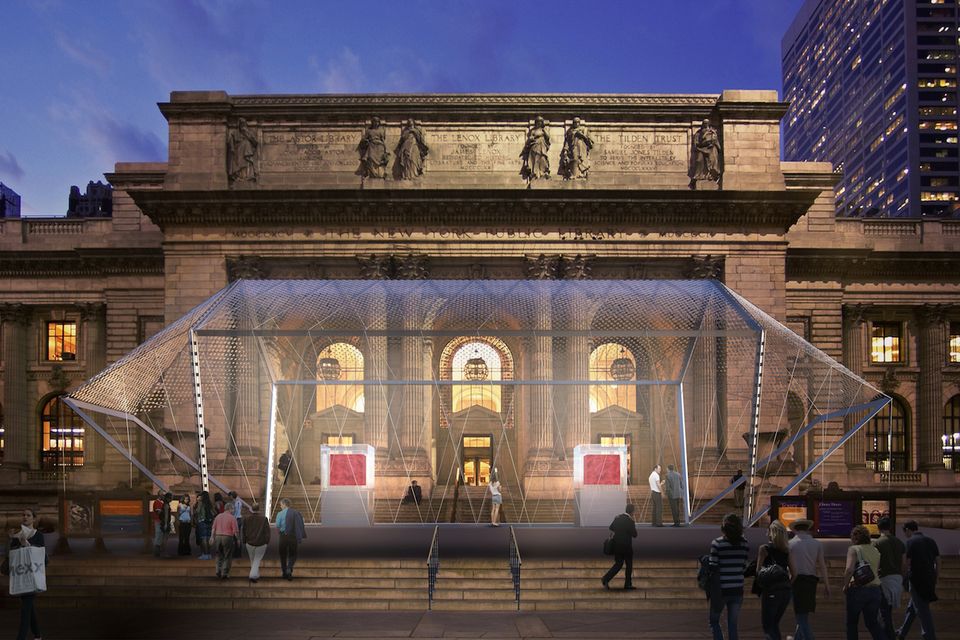 This week, New Yorkers can view a video preview of Marc Quinn’s forthcoming project Our Blood, in which around 2,000 litres of frozen human blood drawn from 10,000 resettled refugees, celebrities and other participants will be encased in a transparent pavilion on the steps of the New York Public Library’s Stephen A. Schwarzman Building. The installation, scheduled to debut in 2021, is accompanied by a series of promotional videos featuring stars and refugees alike, with the first being shown at the Big Screen Plaza at Sixth Avenue and 30th Street until the end of June.

Quinn, who has previously produced colossal sculptures using his own blood, says he wanted to make a work about the refugee crisis after being deeply affected by “these visceral, primordial images of people crammed in boats and crossing the sea, but I wasn’t sure what I would do”. At the same time, Quinn was thinking about making another sculpture with human blood, and those two ideas suddenly came together when he was on a plane from Beijing to London. “It seemed like this was an important topic—one of the defining topics of the century,” he says.

The project has drawn support from Anna Wintour, Kate Moss, Paul McCartney and other celebrities who have agreed to donate blood and appear in videos speaking about the existential nature of Quinn’s project and the refugee crisis, which will be shown across New York while the work is on view. Quinn chose to work with high-profile figures to invoke “how some humans are over-celebrated, and others unvalued”, he says. He adds, “No one’s blood or biology is better than anyone else’s, and once you start thinking like that it’s much more difficult to make someone else ‘the other’.”

The work will be accompanied by a series of talks, programmes and video and written testimonials from participants that will be archived at the project’s official website. Plans call for the project to begin an international tour after its run in New York. (The opening and closing dates are not yet known.)

Noting Christoph Büchel’s controversial work at the Venice Biennale, which involved a cargo ship on which more than 800 refugees died after it sank in the Mediterranean Sea, Quinn says that his project is “not a spectacle—it’s a collaborative work made with people on an equal basis”. He adds that it is a non-profit project, with 50% of the proceeds donated to the International Rescue Committee and the remaining proceeds disbursed to other refugee organisations and programmes.