Lakin Ogunbanwo, e wá wo mi (come look at me, 2019) Courtesy of Whatiftheworld

The Nigerian photographer Lakin Ogunbanwo is the first artist to be awarded the 1-54 Contemporary African Art Fair’s new residency programme in collaboration with the Thami Mnyele Foundation in Amsterdam.

The announcement was made at yesterday’s preview of the third Marrakech edition of the 1-54 Contemporary African Art Fair (22-23 February) in the plush environs of La Mamounia hotel.

Touria El Glaoui, the founding director of 1-54, says the new initiative of offering a residency to one of the exhibiting artists at each of the fair’s editions in Marrakech, London and New York is a response to a rise in residencies seeking out African artists in recent years. “They wanted more African artists to take part in their programmes but they didn’t know how to go about it as they didn’t have access to artists from the continent,” she says, adding that as “African artists became more visible, it also became more apparent that these residency programmes had no artists from the continent.”

The idea began a year ago when the ISCP, the residency partner for the New York edition of 1-54 in New York in May, approached El Glaoui with a sponsor (the Tauck Ritzau Innovative Philanthropy) who specifically wanted to support an African artist. The first Ritzau Art Prize, to be awarded at 1-54 New York in May, will support an artist from the African continent through a three-month “career-enhancing” residency at ISCP, focused on professional development. The London fair, held in October, will partner with Marrakech’s Museum of African Contemporary Art Al Maaden (Macaal), which has recently launched its own residency programme. El Glaoui stresses, however, that she and the fair are not involved in the selection process aside from the requirement the artist must be exhibited at the event.

Ogunbanwo, who is exhibiting at the fair with Whatiftheworld gallery from Cape Town (which has so far sold six editions of his E wa wo mi series depicting Nigerian brides and marriage ceremonies), will complete the three-month residency in Amsterdam in 2021. The emphasis of the Thami Mnyele Foundation’s residencies is on slow research and cultural exchange between Dutch artists and those from Africa and the diaspora, says Pauline Burmann, the chairman of the foundation which was founded 30 years ago in December 1990 in memory of the eponymous South African artist and freedom fighter. The residency is fully funded (artists’ flights, accommodation, living costs, museum passes and, crucially, bicycles are all paid for) and past recipients have included Zanele Muholi and Haroon Gunn-Salie—applicants range from young emerging artists to well-known names such as the Ghanaian El Anatsui. 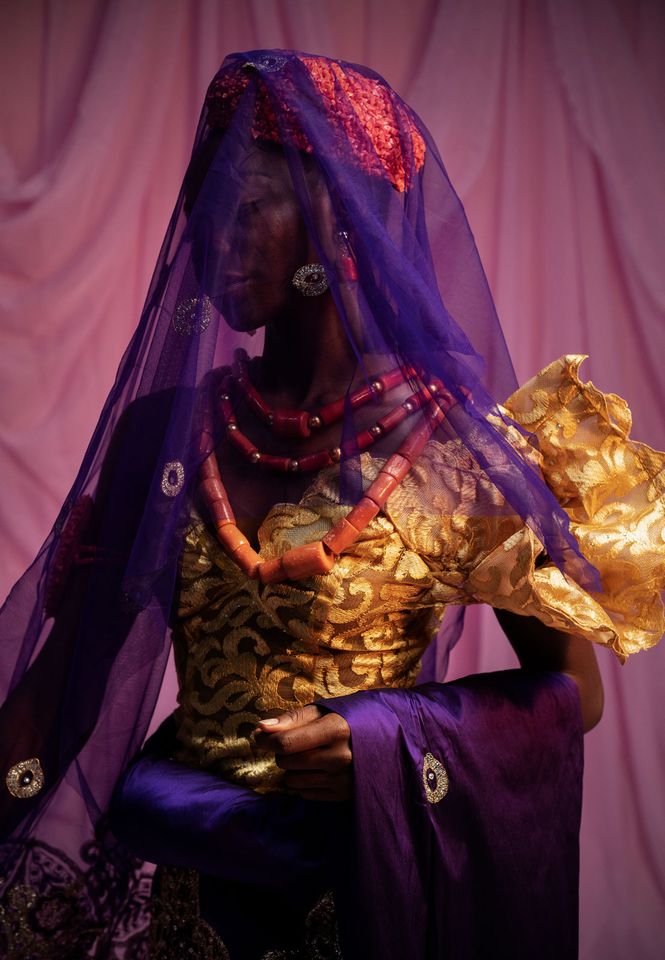 Lakin Ogunbanwo, e wá wo mi (come look at me, 2019) Courtesy of Whatiftheworld

Burmann says what attracted her to Ogunbanwo, whose practice is rooted in fashion and portraiture photography, “was not that he had a fixed plan but that he left it open—with a research-based programme, you never know the answer.” Ogunbanwo plans to invite Dutch artists and locals into his studio and photograph them before they go clubbing, an extension of his project documenting the party culture of Nigeria, in which photographs people in his studio before a Saturday night out, with a nod to the legacy of Malick Sideibé and Seydou Keita. Yet, he says: “I cannot exactly determine how this will be translated in The Netherlands until I have lived in the space and begin interacting with the locals.”

Burmann, who did a research trip to visit residencies in Tanzania, Uganda and Kenya last year on behalf of the British Council, thinks the rise in residencies globally is in part due to an increase in value placed upon artistic process. Professional development, namely teaching artists to be wise to how the art market works, is also key. With the Thami Mnyele Foundation, Emmelie Koster, the founder of No Man's Art Gallery in Amsterdam, helps artists learn how to price their work so, Burmann says, “it's not like [people walk into their studio and think] ‘oh, we can buy this cheap because they come from Africa’. That's not at all the case [with this residency]. The artists in Amsterdam also teach them how to price their work and deal with galleries.”

A symbiotic relationship with the art market

There is, sometimes, an almost direct correlation between residencies and the rise in the market for an artist’s work—it all comes down to good old-fashioned patronage. A growing interest among wealthy collectors in African artists and funding for them to do residencies goes hand-in-hand, El Glaoui says: “Before, it was a bit of a vicious circle: the big collectors didn't have an interest in contemporary African art because they didn't know the artists because they weren’t visible, and the lack of visibility was partly because [African artists] were not getting funded to do residencies.” Making influential contacts is perhaps the most valuable aspect of doing an established residency, El Glaoui points out, and gaining access to curators and collectors is particularly important for African artists based away from major art centres such as New York and London.

A striking recent example of this often symbiotic relationship between residencies and the art market, El Glaoui says, is the fast international rise of the Vienna-based Ghanaian painter Amoako Boafo, who last year became the first artist-in-residence at Miami’s new Rubell Museum (formerly known as the Rubell Family Collection)—the fruits of his labours were exhibited at the museum’s opening exhibition in December during Art Basel in Miami Beach. Earlier this month at a Phillips evening sale in London, Boafo’s painting The Lemon Bathing Suit (2019) sold for £550,000 (£675,000 with fees), more than ten times the high estimate at the artist’s auction debut (though Bloomberg reported that the artist was unhappy that his work had been flipped into auction by the dealer-cum-collector Stefan Simchowitz). “The fact that Rubells decided to give him a residency and a show really increased his visibility,” El Glaoui says. 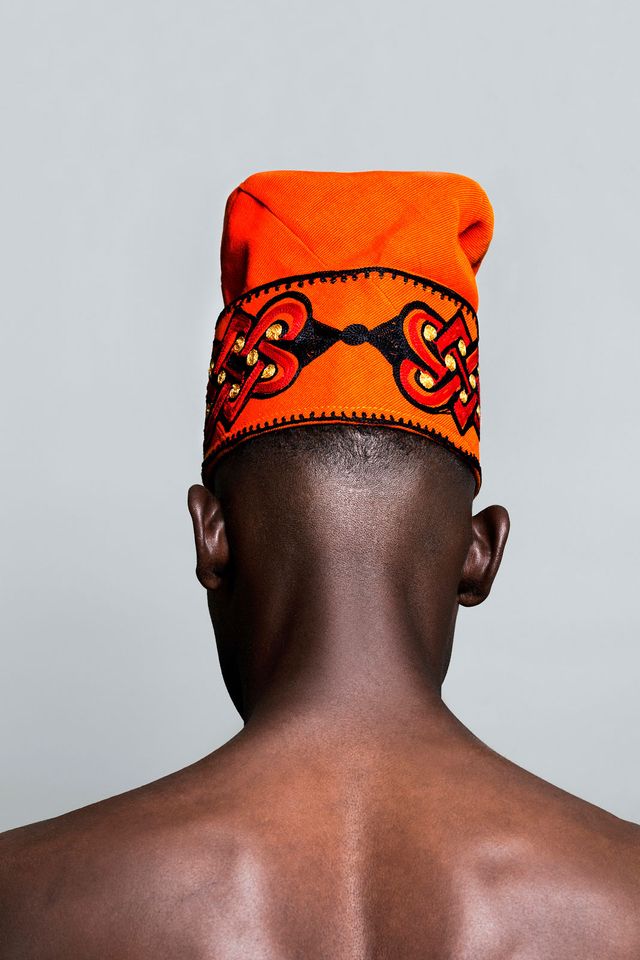 Lakin Ogunbanwo, I Miss You (2019) Courtesy of Whatiftheworld

A fair in a frontier market

More than half (14) of this year’s exhibitors at 1-54 Marrakech, a boutique fair of 20 galleries which attracts around 2,000 visitors, are from Africa (the highest proportion yet) and ten galleries are new this year—quite a turnover although the fair’s organisers maintain they want the exhibitor list to provide variety each year. New exhibitors include Whatiftheworld (South Africa), Afikaris (France), Nil Gallery (France) and So Art Gallery, based in Casablanca.

Hanifa Chanaoui of So Art Gallery says they decided to exhibit because “Touria brings very good collectors from all over the world, people who are really interested in African art but who we often have not met before.” Chanaoui had sold five watercolour and acrylic works (priced at €1,700 each) by the Benin artist Leslie Amine to French and American collectors, all new to the gallery, within the first few hours of the preview.

El Glaoui, who was born and raised in Morocco, is keen to grow the local collector base and working with authorities to ease the transfer of dirhams from Moroccan accounts to international banks has been a steep learning curve, she says. “It’s been a case of making something impossible, possible. We get permissions every year that are a bit better than the last, but it’s still slow,” she says of Morocco’s art import/export procedures. This is something she is trying to improve each year—it can take up to eight months for a Morocco-based collectors to receive their works, although El Glaoui hopes this can be reduced to three as both collectors, customs and galleries become more accustomed to the procedure.

The process requires the trust of galleries, who, El Glaoui says, “must release a work back to Morocco before being paid, in order to get the import paperwork that is needed to show that the import taxes have been paid, which is in turn needed to transfer the money outside the country.”

A challenge, yet El Glaoui says: “I sort of love it. If you want to be here, you have to deal with these things.”