Sotheby’s auction is expected to raise £600,000 towards restoration of Durham Wharf by architecture collective Assemble

At a time when artists are being squeezed out of London due to rising rents, the collection of two British painters is being auctioned to benefit the rebuilding of their former studios in the west of the capital. The Turner-prize winning architecture collective, Assemble, is overseeing the million-pound restoration.

Mary Fedden and Julian Trevelyan, who met in 1949 when she was a student at the Slade and married in 1951, shared a studio at Durham Wharf in Hammersmith. They worked in the same room for the rest of their lives—Trevelyan died in 1988, aged 78, and Fedden in 2012, aged 96.

The couple, who also lived at Durham Wharf for more than 40 years, kept an extensive collection of their own works, as well as pieces given to them by friends including Henry Moore, Pablo Picasso, Ceri Richards and Elizabeth Frink. The collection is expected to raise £600,000 at Sotheby’s on 23 November, with prices ranging from £400 to £50,000. 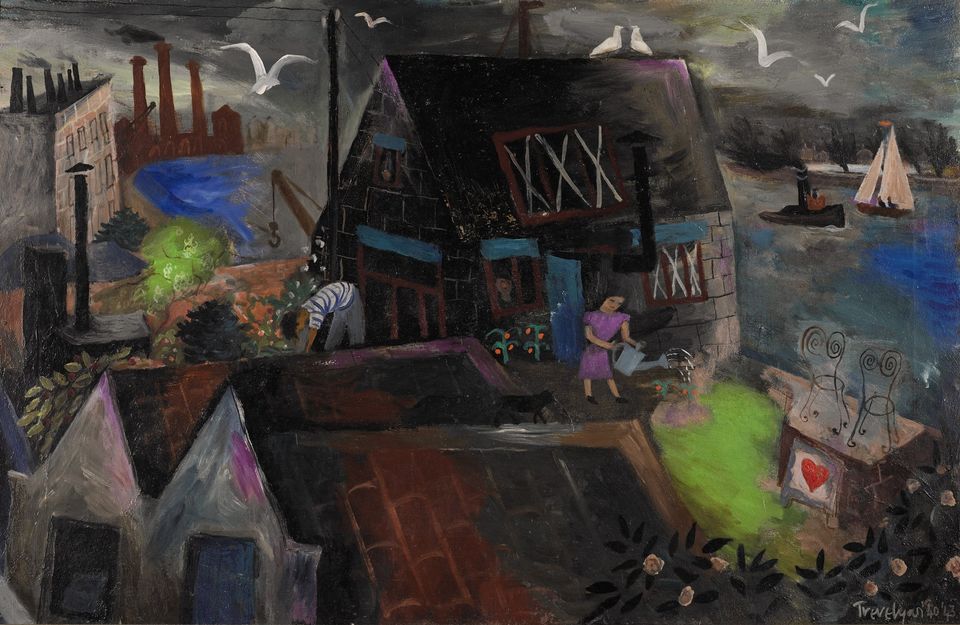 Fedden, who could not bear to part with her most cherished works, once said she could look around the studio “and know exactly which of my pictures I don’t like, which ones I like—and the few that I love”. A portrait of Trevelyan painted shortly after the couple’s marriage and several collages created using cast-offs from his etchings are among the works kept by Fedden in the studio until her death.

Formerly a warehouse for unloading and distributing coal, Durham Wharf first became a creative hub for artists and designers in the mid-1920s. The architect Kit Nicholson (brother of the British Modernist, Ben) converted the buildings into living and working studios in 1934. The space also became a venue for exhibitions for several leading artists of the time including Cecil Collins.

In the mid- to late-1920s, Henry Moore lived and worked not far from Durham Wharf and became a close friend of Ursula Mommons—Trevelyan’s first wife who was a potter. Moore even had a series of his terra-cotta figures fired in Mommons’ kiln at the studios.

Eighty-two years after Trevelyan first took the lease on the studios, the buildings are still being used by artists, film-makers and designers but are “in serious need of restoration”, says Phillip Trevelyan, Julian and Ursula Mommons’ son. Assemble’s plans include several live-work spaces, a separate family or management flat, a library, an archive room and a restored garden room.

The studios may eventually be run by a charitable trust, but for now Durham Wharf will be managed as a not-for-profit business by Philip Trevelyan and his family. “We want to make sure this riverside sanctuary remains a place in which people can be creative, with a focus on the visual arts,” he says.