What to see during Mayfair Art Week in London 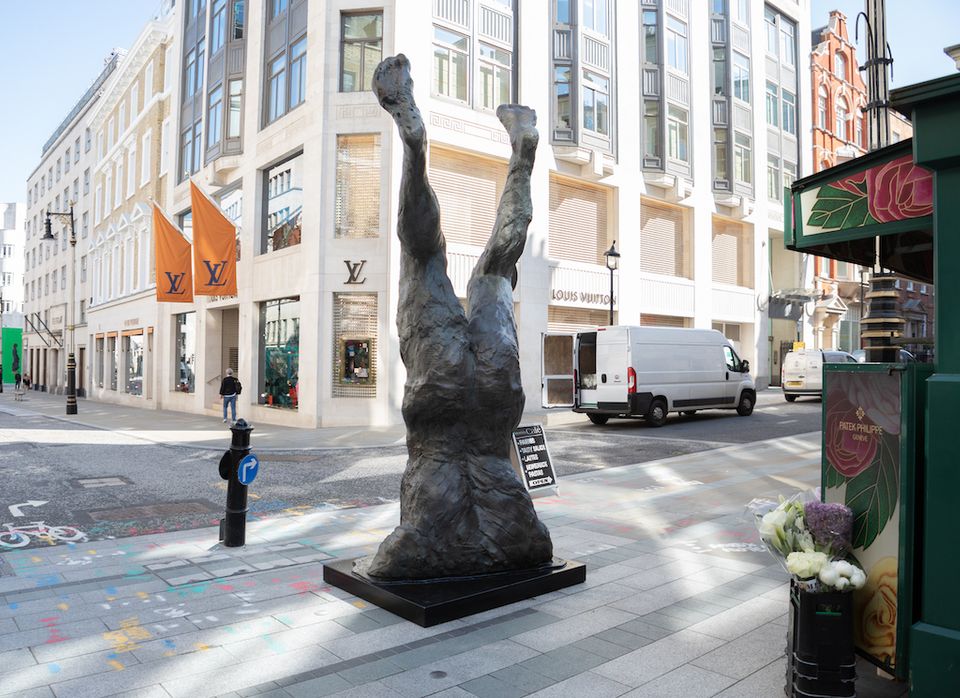 The sound of popping corks will echo through the streets of London's ritziest neighbourhood tonight as Mayfair Art Weekend kicks off its eighth edition.

Predating the recently launched London Gallery Weekend by seven years, the event brings together around 50 spaces located in the historic art hub, as well as a select few from surrounding neighbourhoods like Soho and Fitzrovia. While commercial galleries are at the forefront of the weekend—ranging from mega dealers like Hauser & Wirth down to smaller outfits like Amanda Wilkinson—a number of project spaces and non-commercial spaces are also taking part. The Royal Academy of Art's degree show is included in the curated art trail that helps map out your route, as is the recently launched residency-cum-gallery V.O. Curations. The works on show run the whole gamut too, from historic shows of Old Master and Modern artists to cutting-edge contemporary works. 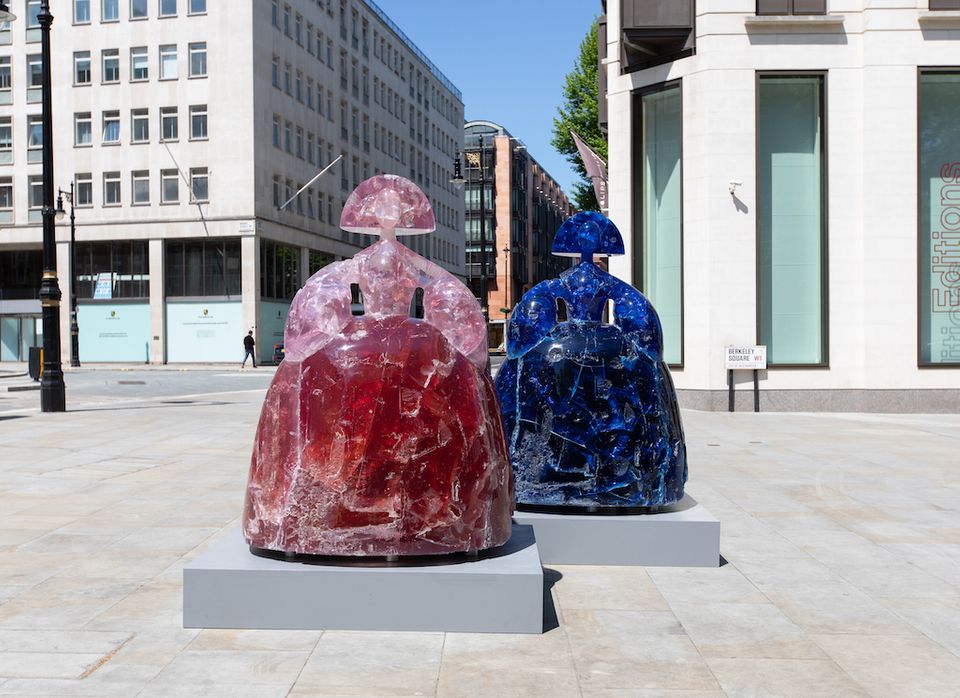 Since its launch in 2014, the weekend is usually timed to coincide with Masterpiece Fair, which postponed its 2021 edition to September. As a result, for many of the participating dealers the weekend brings a welcome reason for collectors to tour the neighbourhood and provide some semblance of the London early summer season that is a key period for art sales.

Alongside the exhibitions, a sculpture trail of commissioned works will be dotted around the Mayfair's streets and public squares. These include David Breuer's Weil Alien 2, depicting a toppled bronze figure and two dense, coloured resin works by Manolo Valdés on Berkley Square, which reference the Infanta Margarita, child star of Velzáquez's master painting Las Meninas (1656). The trail also includes a list of the neighbourhood's permanent public works of art that are hiding in plain sight. These include a stone sculpture by Henry Moore situated atop Louis Vuitton's flagship store on New Bond Street and Banksy's Falling Shopper, surreptitiously located in an alleyway in the heart of the district.

Our top shows to see 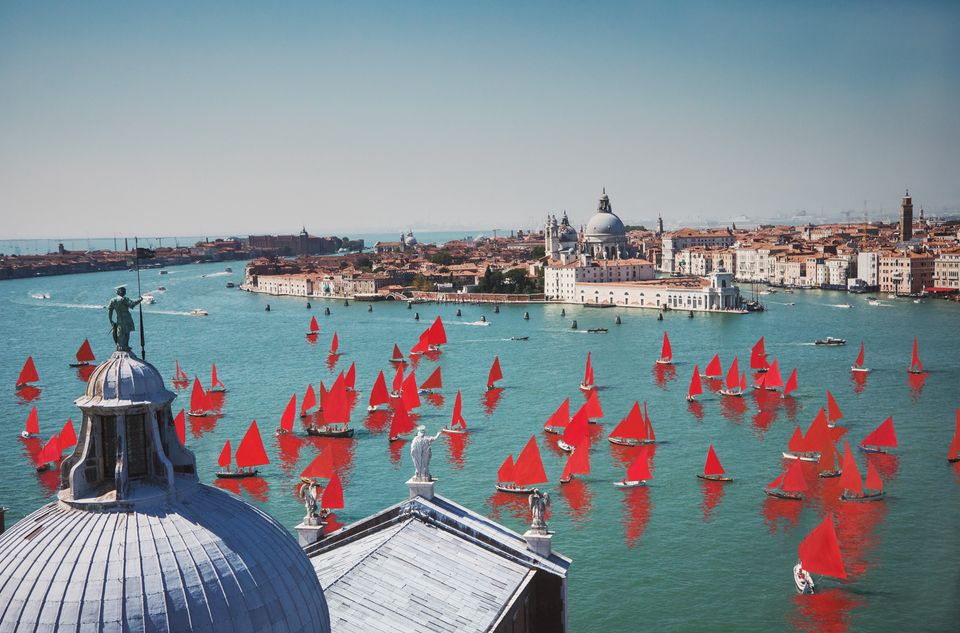 The American artist Melissa McGill's first show with Mazzoleni presents work that documents and reflects on her 2019 public art project in Venice Red Regatta, for which she staged four choreographed regattas in the city's lagoons. Enlisting local sailors, McGill hand-painted the sails of their traditional vela al terzo boats in various shade of red. Timed to coincide with the 58th Venice Biennale, the performance's striking presence brought renewed attention to La Serenissima's famous but imperilled waterways, which are under grave threat from cruise ships and rising sea levels linked largely to climate change. Recorded in large-scale painted photographs, the vitality of the red hues also reframes our understanding of the decaying city. In one photograph the boats have been cropped out, leaving only a pool of crimson reflected on the water like spilled blood: a reminder of the lives, both of marine species and of migrants, that are increasingly lost at sea. Also shown are a series of black mahogany boxes that resemble bird's eye views of Venice's irregularly shaped public squares, known as campi. When the box is opened, recorded sounds of quotidian life from each square spill out, bringing forth the locals who nurture and shape the city long after the tourists and art circuit have left. 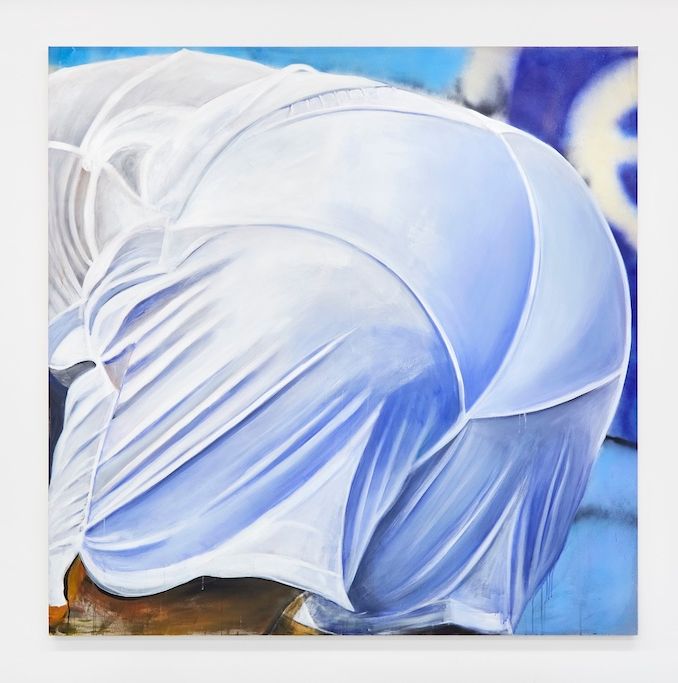 Motoko Ishibashi's On Hard (2021) Courtesy of the artist and V.O. Curations

So famous is Rafael Nadal's backside that it has more than one regularly updated fan account on Instagram. Meanwhile celebrities like Jennifer Lopez and Kim Kardashian routinely "break the internet" for baring their bottoms. As is apparent to anyone with their eyes open, we are in the age of the ass. Interrogating our culture's celebration of the callipygian, the Japanese artist Motoko Ishibashi shows a series of large-scale acrylic and spray painted works depicting buttocks in varying states of undress, many of which belong to well-known sports and entertainment figures. Considering the ass as a symbol of desire, commodification and aspiration, Ishibashi questions the complex, and often symbiotic, power relations at play between the objectified body and the digital realm. Shown alongside is an installation of photographs and found objects based around a recent excursion Ishibashi took with fellow Japanese artist Urara Tsuchyia to a traditional bath house in Tokyo. Captured by the fashion photographer Yuto Kudo, it shows both artists defying the bath house's strict rules, such as no eating or no smoking, challenging convention while also stylistically drawing on traditional Japanese performance art forms such as kaubki theatre. Articles of clothing are haphazardly strewn around the space, forcing the viewer to step around them to approach the photographs as though navigating a messy teenager's bedroom, which provides a second meaning to the exhibition's title. Andrea Appiani's Napoleon Bonaparte with the Genius of Victory (1796) Courtesy of the Earl of Rosebery, Dalmeny House

Envisioning an Empire: Napoleon and Josephine Reunited After 200 Years

At the time when Napoleon commissioned the Milanese painter Andrea Appiani in 1796 to create portraits of him and his then-fiancée Josephine de Beauharnais, his ambitions were grand but clear: marry the girl and conquer Europe. The two resultant works were subsequently bought by a Whig politician looking to curry favour with the French military leader and eventually made their way into separate private hands. Now reunited for the first time in almost 200 years, they are hung side by side and show the couple at the height of their romance. Napoleon's portrait—loaned by Neil Primrose, the 7th Earl of Rosebery—is depicted with the winged Genius of Victory, who inscribes onto a tablet his numerous successful Italian military conquests. Meanwhile Josephine's portrait—which is for sale at £850,000— is replete with floral imagery and hints to the dynastic hopes of the emperor's wife. Shown alongside is a later portrait of Napoleon by Feridnand Jagemann (also for sale). Bonaparte appears slightly cautious and weary—perhaps more aware of his hubristic nature that would soon, along with a particularly cold Russian winter, spell his downfall . 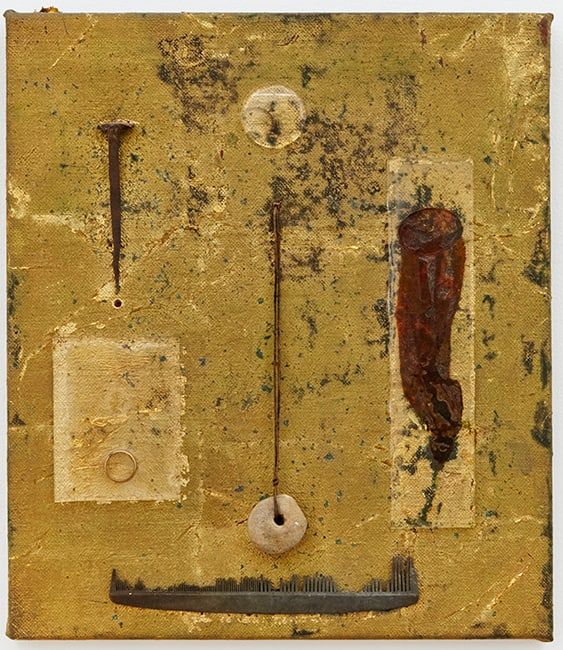 Derek Jarman: When Yellow Wishes to Ingratiate It Becomes Gold

Derek Jarman is best known as the arthouse filmmaker of punk satire Jubilee (1977), biopic Caravaggio (1986) and memento mori Blue (1993), made the year before his untimely death from Aids-related illness. But his painting practice is gaining recognition with recent exhibitions at the Irish Museum of Modern Art and the Garden Museum in London. Gallerist Amanda Wilkinson has worked with Jarman’s estate since 2013. Her latest show of 24 paintings, titled after a chapter of his lyrical book on colour, Chroma, includes a number of canvases that contrast glowing gold-leaf with black tar. Wilkinson describes them as “a kind of archaeology” of Jarman’s life from 1982 to 1992, a period when he was diagnosed with HIV and became a vocal gay-rights activist, met his partner Keith Collins and created a renowned garden at Prospect Cottage in Dungeness. Some paintings are embedded with broken glass, beach flotsam and condoms, while others are inscribed with defiant messages of political protest against the Conservative Thatcher government.