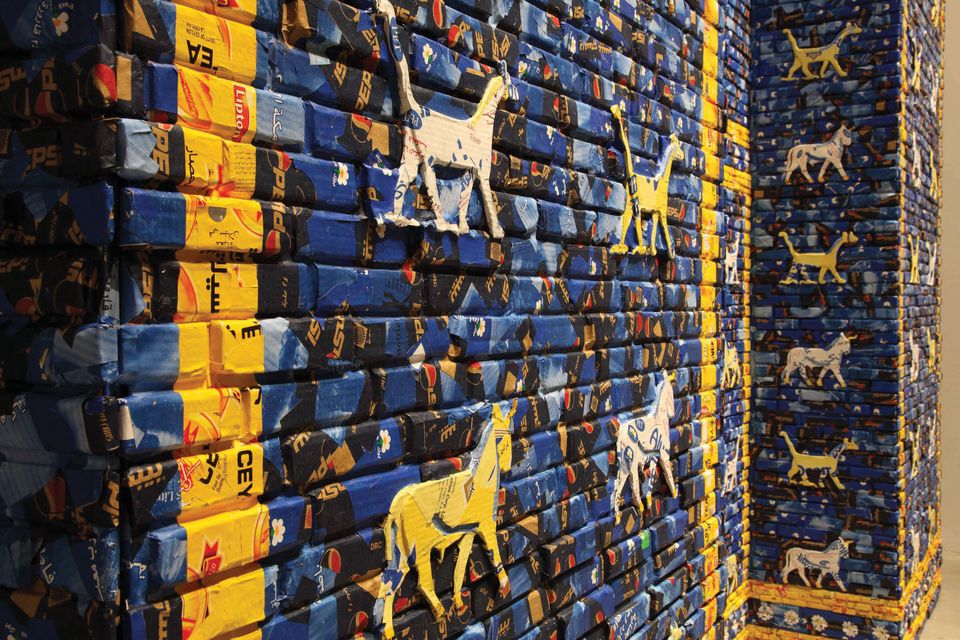 May the Arrogant Not Prevail (2010), in Michael Rakowitz’s first US museum survey at the MCA Chicago Collection Museum of Contemporary Art Chicago, gift of Marshall Field’s by exchange. Image courtesy of the artist and Rhona Hoffman Gallery.

“I want this to be the most global contemporary art museum in North America,” says Omar Kholeif, the senior curator of the Museum of Contemporary Art (MCA), Chicago, and director of its new Global Visions Initiative. The project aims to “embed within the DNA of the museum” a more international view of the art historical canon, Kholeif says, through exhibitions, acquisitions and cultural exchanges with artists from the Middle East, South Asia, Africa and Latin America.

The initiative has already led to the first US museum show of the Chicago-based Iraqi-American artist Michael Rakowitz (Backstroke of the West, 16 September-4 March 2018) and the acquisition of an early work by the Syrian-German painter Marwan, Untitled (Das Knie) (1967).

The key is to develop a lasting legacy, Kholeif says. To this end, the project’s co-chairs—Sheikh Sultan Sooud Al Qassemi, the Sharjah-based collector and founder of the Barjeel Art Foundation, who is also an MCA trustee, and Louis Susman, a former US ambassador to the UK—will build partnerships to realise future projects.

These include a major 2019 group show called Many Tongues: Art, Language and Revolution in the Middle East and South Asia, which will require outreach to a broad group of collectors, Kholeif says, as well as support in shipping the art to the US. Trump’s proposed travel ban on visitors from Muslim-majority countries is also causing difficulties. “I want to ensure these artists get visas and come see their exhibitions,” Kholeif says. “We’re prepared to fight for this.”