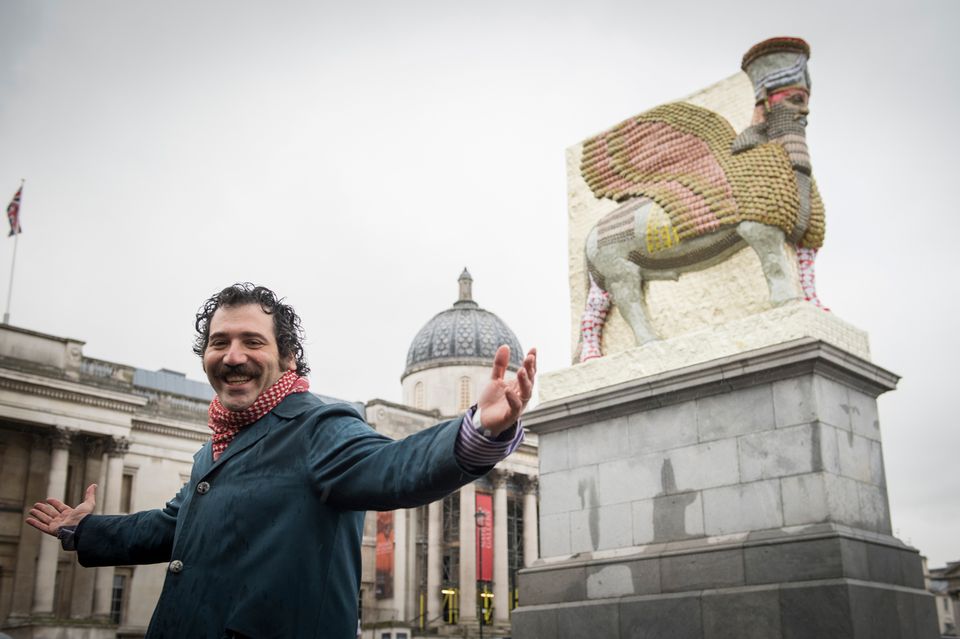 Michael Rakowitz in front of his Fourth Plinth commission, The Invisible Enemy Should Not Exist, in Trafalgar Square, London Photo: Caroline Teo

On a soggy morning in central London, a gleaming new public sculpture lit up Trafalgar Square. Even in pouring rain, the colours of Michael Rakowitz’s The Invisible Enemy Should Not Exist shone from the Fourth Plinth, the platform that has become the city’s most prominent space for contemporary art.

The work recreates an Assyrian winged bull with a human head, known as a lamassu, created in the ancient Mesopotamian city of Nineveh in 700 BCE but destroyed by Islamic State in 2015. It wears what the artist has called an “armour” of colourful date syrup cans, which Rakowitz has worked with for many years and identified as a symbol of the Iraqi people and the refugees that have fled the country in recent years—dates are to Iraq what cigars are to Cuba, he has said.

“The salvage of date syrup cans in this work makes present the human, economic and ecological disasters caused by the Iraq wars and their aftermath,” he said in a speech just before the sculpture was unveiled. “The reconstruction of the lamassu set on the Fourth Plinth allows an apparition to haunt Trafalgar Square at a time when we are witnessing a massive migration of people fleeing Iraq and Syria. I see this work as a ghost of the original and as a placeholder for those human lives that cannot be reconstructed, that are still searching for sanctuary.”

Speaking in an extended interview for The Art Newspaper podcast last week, Rakowitz highlighted the “ultimate dehumanisation of the Iraqi people and its culture from 2003 onwards” and the “tendency towards thinking that anything can be replicated as long as you 3D scan it. [But] you can’t 3D print the people who lose their lives along with the cultural heritage that suffers”. 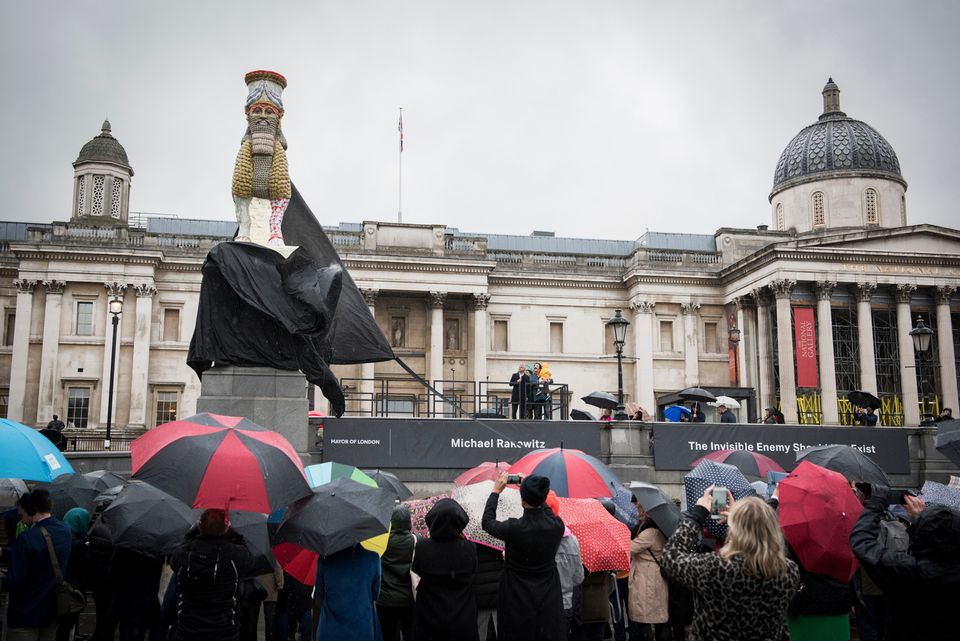 The unveiling of the latest Fourth Plinth commission, The Invisible Enemy Should Not Exist by Michael Rakowitz, in Trafalgar Square, London Photo: Caroline Teo

The man who pulled the cord to release the winged creature from beneath its black veil was the Mayor of London, Sadiq Khan, who told the small, rain-sodden crowd: “We’ve surpassed ourselves this time.” He said 20 million people would see the work in two years. Khan has been an outspoken critic of the nationalist rhetoric that contributed to Britain’s Brexit vote in 2016, and clearly sees Rakowitz’s work as a symbol of his post-referendum London Is Open campaign.

“One of the reasons we should be so proud is this piece of art is from an Iraqi American of Jewish faith to be displayed in the greatest city in the world,” Khan said. “And the creation and installation of this piece of art is an act of resistance against the tyranny of religious fanaticism. It is an act of resistance against the acts of philistinism. But it is also a celebration of who we are as a city: confident in who we are, pluralistic, welcoming and diverse.”

And what of all the date syrup from the 9,000 cans used in the sculpture? “We’re extending the space of the statue off the Fourth Plinth into your bellies,” Rakowitz announced. Sure enough, in a white tent near the sculpture, you can try this foodstuff whose sweetness, Rakowitz has said in the past, is harbinger of “good things to come”. “You can sample Iraqi date syrup and taste this sculpture,” he told his audience. “So here’s to a sweeter future.”

Rakowitz's work will be on show in Trafalgar Square until March 2020.