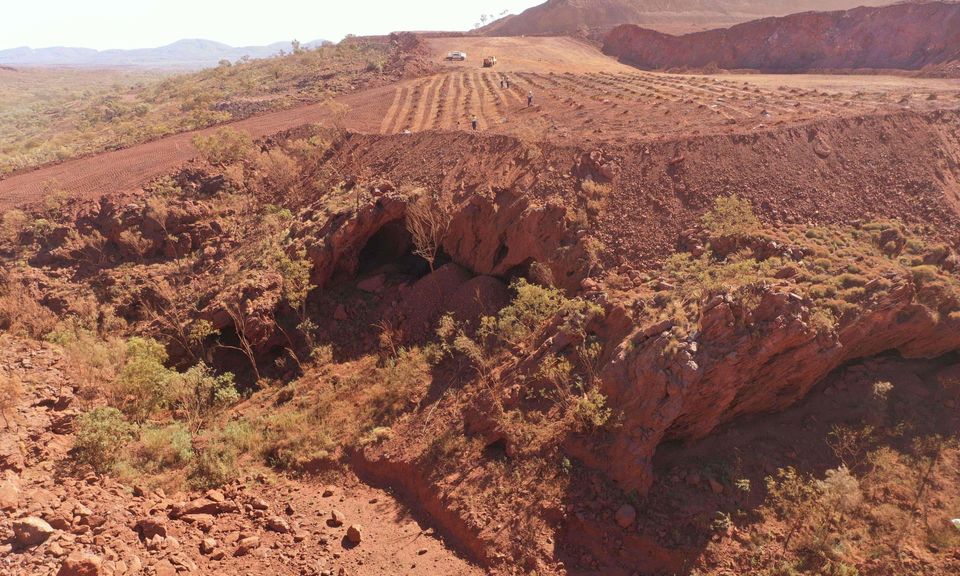 The ancient rock shelters at Juukan Gorge were blasted with dynamite on 24 May to expand nearby mining operations Photo: Puutu Kunti Kurrama and Pinikura Aboriginal Corporation

The mining giant Rio Tinto has apologised for blowing up a 46,000-year-old Aboriginal heritage site at the Juukan Gorge in the remote Pilbara region of Western Australia. Dynamite blasting close to the sacred site on 24 May is believed to have destroyed two partially researched rock shelters, where archaeological excavations in 2014 uncovered plaited hair fragments from a belt and a 28,000-year-old kangaroo bone pick—Australia’s oldest known bone tool.

Rio Tinto states that it avoids heritage impacts “where practicable”, however, it sought and won government permission in 2013 under Section 18 of the Aboriginal Heritage Act for work that would “impact Juukan 1 and Juukan 2 rock shelters” as part of the expansion of the company’s Brockman 4 iron ore mine. Rio Tinto’s chief executive of iron ore, Chris Salisbury, told ABC News the firm believed it had reached a mutual understanding with traditional landowners that the sites “would be mined as part of our normal mining sequence”.

Western Australia’s minister for Aboriginal affairs, Ben Wyatt, has commented that he was not aware of prior concerns about the blast—a claim disputed by the Puutu Kunti Kurrama and Pinikura traditional landowners. The state government is currently reviewing the 1972 Aboriginal Heritage Act, including the controversial Section 18, but discussions have been delayed by Covid-19. Wyatt has ruled out further protection to sites at risk or a moratorium on potentially destructive mining activities while the review is under way.

Peter Stone, the Unesco chair in cultural property protection and peace at Newcastle University in the UK, has likened the Juukan Gorge destruction to the Taliban’s demolition of the Bamiyan Buddhas in Afghanistan and the attacks on Palmyra in Syria by Isis extremists.

The episode is just the latest in decades of conflict between Indigenous custodians of ancient rock art and the extractive industries that fuelled Australia’s long economic boom. Since 2010, there have been 463 applications under Section 18 to undertake mining operations that could affect Aboriginal heritage—all were approved. In 2018, the Fortescue Metals Group backed down from using its Section 18 permit to destroy ancient sites in the Spear Valley after an outcry.

The archaeologist Claire Smith, a professor of Flinders University, tells The Art Newspaper that “this incident is particularly unfortunate given that Rio Tinto has worked hard over the years to develop robust processes to protect sites. Clearly, these processes are not enough.”

Smith points out that there was a significant time lag between the approval of the Section 18 permit and the blasting. Both Juukan Gorge rock shelters were excavated in 2008 and a further excavation was undertaken in 2014, revealing the age of the site. “It is beyond me why the subsequent date of 46,000 BP [before the present] did not raise a red flag for Rio Tinto, and the Western Australian government,” she says.

Since the 1960s, coastal Western Australia has seen widespread damage to the world’s largest collection of petroglyphs on the Burrup Peninsula (Murujuga) where among some million rock carvings are what may be the oldest depiction of a human face.

In January this year, the Australian federal government nominated the Murujuga cultural landscape as a tentative Unesco World Heritage site, after decades of delays during which industry was allowed to expand in connection with the export of liquid natural gas and other products. The Murujuga is only the second human-made Aboriginal site nominated for World Heritage status by Australia.