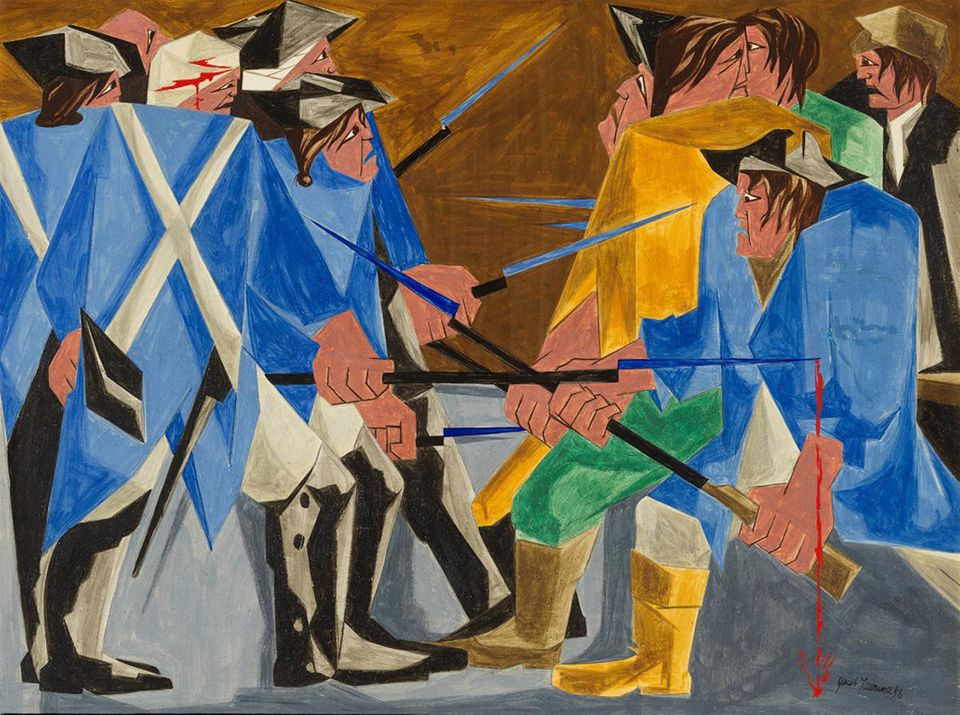 Jacob Lawrence, There are combustibles in every State, which a spark might set fire to.—Washington, 26 December 1786, a 1956 work in egg tempera on hardboard from the series Struggle: From the History of the American People © The Jacob and Gwendolyn Knight Lawrence Foundation, Seattle/Artists Rights Society (ARS), New York. Photo by Anna-Marie Kellen

In a bit of serendipity, a missing painting from an epic series by Jacob Lawrence has been located and reunited with the others in a travelling exhibition that is now at the Metropolitan Museum of Art, the institution announced today.

The work in tempera on panel is one of 30 in the original series, Struggle: From the History of the American People (1954–56), which depicts watershed events dating from the early decades of the republic. The Met says that five of the 30 had been lost to history, and two of those were recorded only by their titles rather than with photographic images, including the one that was just rediscovered.

The painting, No. 16 in the series, was installed today in what had been a placeholder space with a grayscale rectangle in the show, and visitors will be able to view it starting on Thursday, says Randall Griffey, the Met curator in charge of the museum’s American wing who jointly organised the museum's presentation of the exhibition.

A recent visitor to the exhibition who knew that an artwork by Lawrence had been in a neighbour's collection for years suspected that the painting might belong to the Struggle series and urged the owners to contact the museum, the museum says. The owners, a couple who live on the Upper West Side of Manhattan, wish to remain anonymous, it adds.

The newly discovered painting, titled There are combustibles in every State, which a spark might set fire to. —Washington, 26 December 1786, depicts Shays' Rebellion, an armed uprising by farmers in Massachusetts protesting high state taxes and land foreclosures that helped to spur the writing of the US Constitution and moves to bolster federal power. In slashing forms in blue, black, yellow and sienna, it depicts opposing forces with bayonets.

The travelling exhibition, Jacob Lawrence: The American Struggle, organised by the Peabody Essex Museum (PEM) in Salem, Massachusetts, has been on view at the Met since it reopened to the public in late August. The show closes on 1 November and travels next to the Birmingham Museum of Art in Alabama, the Seattle Art Museum and the Phillips Collection in Washington, DC.

In an interview, Griffey said the couple who owned the painting “had a hunch” that it was connected to the series after reading an article about the show after it opened earlier this year at PEM. But they did not take action until their friend urged them to do so this month, he adds.

He says he was initially “suspicious” when he was contacted about the existence of a possible painting from the series. “You’re meant to be critical and doubtful about it, but as soon as I saw images of the painting, I thought, ‘This can really be right.’ We asked our conservator to get over to see it as soon as possible. It lined up quickly.’’

The painting was signed and dated by Lawrence. In the work, which Griffey describes as “grisly”, “the treatment of blood in the panel was very consistent with that in the others,” he adds.

Lawrence applied twice to the John Simon Guggenheim Memorial Foundation for grant support to aid him in executing the series, Griffey says, and specifically mentioned Shays’ Rebellion in his list of suggested topics.

Most of the paintings in the series are accom­panied by a phrase or quotation based on the artist’s detailed research into the early years of a young American republic. Travelling from his home in Brooklyn to Harlem’s Schomburg Center for Research in Black Culture, Lawrence delved into history books, letters, speeches, legal petitions and military reports in search of themes encapsulating the idea of anxious striving.

The panel’s title quotes from a 1786 letter from the retired general George Washington, who expressed concern about “the conduct of the insurgents of Massachusetts” and “attendant disorders”.

The catalogue accompanying the show notes that as Lawrence was beginning his Struggle series, the NAACP was preparing its land­mark case against public school segregation in Brown v. Board of Education. “As Lawrence researched Shays’s Rebellion, the potential ‘spark of the Brown decision (1954) was literal,” the historian Kerri Greenidge writes. “The fire would emerge in black citizens’ nonviolent direct action in the face of violent white resistance to public school desegregation.”

The painting's existence was first documented in a brochure released at the initial showing of the Struggle series at the Alan Gallery in New York in 1956. Later the series was sold to a collector who then sold it off in pieces. The Met says that There are combustibles had not been seen publicly since 1960, when the current owners purchased it at a local charity art auction.

“It was our fervent hope that the missing panels would somehow surface during the run of American Struggle in New York, the city where Lawrence spent most of his life and where the series was last seen publicly," Griffey says in a statement joined by Sylvia Yount, curator in charge of the American wing, who co-organised the Met's presentation of the exhibition. “Lawrence's dynamic treatment of the 1786-87 Shays' Rebellion reinforces the overall theme of the series—that democratic change is possible only through the actions of engaged citizens, an argument as timely today as it was when the artist produced his radical paintings in the mid-1950s.”

In the interview, he described the painting’s discovery as “a great New York story” and an “exclamation point” to the show. “It’s been a mixed blessing,” he adds, however. “It was great to open [in August] to such a substantive project, but we’re unable to conduct tours or welcome school groups” because of restrictions related to the coronavirus pandemic.

"It is rare to make a discovery of this significance in modern art, and it is thrilling that a local visitor is responsible,” says Max Hollein, the Met’s director. “We are also very excited for our colleagues at the Peabody Essex Museum, the organisers of the exhibition that inspired this historic find.”