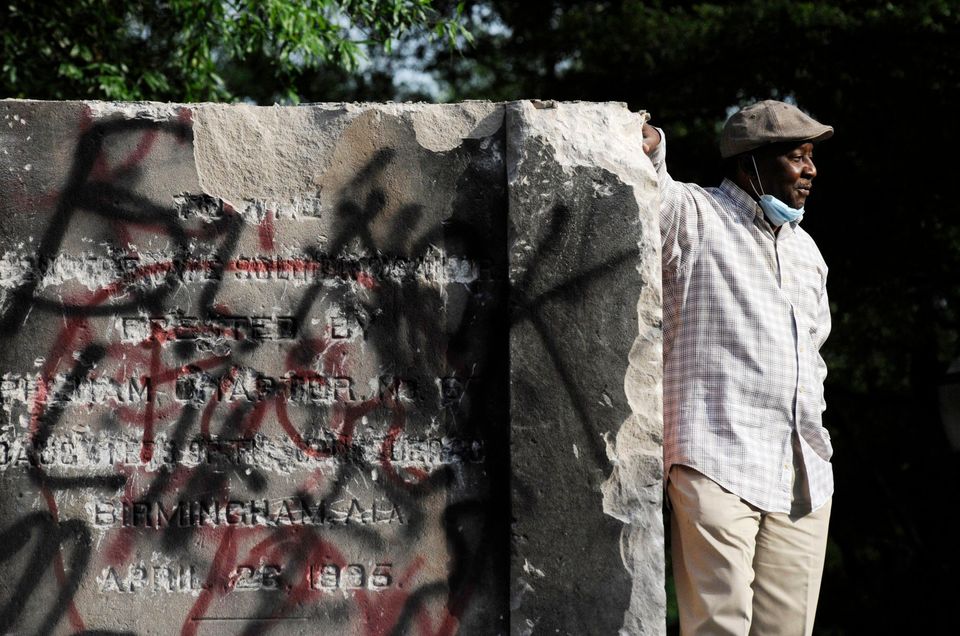 A man stands by the remains of a Confederate memorial that was removed overnight in Birmingham, Alabama. The city took down the more than 50-foot-tall obelisk following protests over the police death of George Floyd and a night of vandalism in the city Jay Reeves/AP/Shutterstock

Last week a crowd of protesters toppled a statue of the Civil War-era industrialist and Confederate Navy captain Charles Linn in a park named for him in Birmingham, Alabama. Last night, in the same park, the last of the Confederate Soldiers & Sailors Monument was removed after the obelisk had largely been dismantled over the week as demonstrations against police violence and racism continued. What is left behind now is a just a chipped concrete base emblazoned with the graffitied words "Black Lives Matter".

Monuments and public sculptures across the US are being vandalised amid the ongoing protests and riots following the murder of George Floyd at the hands of a white police officer in Minneapolis, Minnesota, on 25 May. And while these acts—which mostly target monuments glorifying colonisation and racial inequity—are being widely praised on social media, some artists and public officials are condemning the defacement of public works, arguing that vandalism does not add to the protestors’ cause even as it highlights the long legacy of state-sponsored violence in the US.

That so many memorials to Confederate soldiers have remained in place across the US, especially the south, has long been a point of contention for many who believe they valorise white supremacy. The city of Birmingham had previously sought to remove the Charles Linn monument but was blocked by the Alabama attorney general in defence of the Alabama Memorial Preservation Act, a Republican-backed legislation aimed at complicating the removal of Confederate monuments. The current protests ostensibly provided an opportunity to collectively reverse that decision.

In response to a video of the statue’s dismantling posted on Twitter, some users applauded the action, with one user writing: “This is the only kind of destruction we need. Stop burning down the community and burn down the confederate relics.”

The Linn Park memorials were not the only Confederate monuments to fall. A statue of General Robert E. Lee was toppled from its pedestal in front of the namesake high school in Montgomery, Alabama, on Monday. A statue outside the Tennessee State Capitol of Edward Carmack, a controversial former lawmaker and newspaper publisher who espoused racist views, was torn down Saturday. The Robert E. Lee memorial on Monument Avenue in Richmond, Virginia, was covered in graffiti over the weekend, as was the Stonewall Jackson statue. In Charleston, South Carolina, the Confederate Defenders statue was spray-painted.

Meanwhile, in Washington DC, where demonstrators were dispersed with tear gas yesterday so President Trump could pose for a photo outside of a historic church, protestors have targeted various monuments on the National Mall. That includes the large World War II Memorial and fountain, which has been graffitied with the phrase “Do black vets count?”

The National Park Service, which posted photographs of the vandalism on social media, says that “for generations the Mall has been our nation’s premier civic gathering space for non-violent demonstrations, and we ask that individuals carry on that tradition”.

In the wake of last night's demonstrations, there are numerous instances of vandalism to sites around the National Mall. For generations the Mall has been our nation’s premier civic gathering space for non-violent demonstrations, and we ask individuals to carry on that tradition. pic.twitter.com/LmIHfW2AHj

Some commenters on the park service’s post, however, pointed to the problem of decrying the destruction of property while remaining silent on the issue of murder by police. “I’m not particularly happy to see vandalism in the National Mall, but if said non-violent protest had worked the way it should have, we would not be in this situation today,” one commenter wrote in response to the National Park Service’s post. “I wish a scrub brush and some solvent solution could restore the dead like it will restore that stone.”

The vandalisation of these monuments speaks to the systemic inequality and privileging of white life that remains embedded in the US and its history. For instance, in downtown Chicago, protestors graffitied The Pioneers—part of a series of monuments that bookend the DuSable Bridge on Michigan Avenue—which depicts Native American subjugation by a white, armed general, with the phrases “fuck white supremacy”, “fuck colonisers” and “fuck 12”, in reference to the police.

Despite the powerful statement the protester’s interventions provide on the legacy of state-sponsored violence in America, there have been mixed responses from citizens to the vandalism and looting that has accompanied the protests against police brutality and justice inequality, which have increased in pitch and spread to more than more than 30 cities across the nation. Lawmakers continue to call for an end to the vandalism and the majority of the major cities in which protests continue have now imposed curfews and even activated their National Guard forces to assist police on cracking down on destruction.

This weekend in San Antonio, police arrested a man named Noah Benjamin Escamilla over anti-white supremacist messages he allegedly graffitied on the marble memorial Alamo Cenotaph that commemorates the Battle of the Alamo, the 1836 war in which Texas gained independence from Mexico. In a statement, San Antonio District 1 councilman Roberto Treviño both defends the message of the monument and calls for more “more charges than just vandalism [against Escamilla] because this is a historic site”. 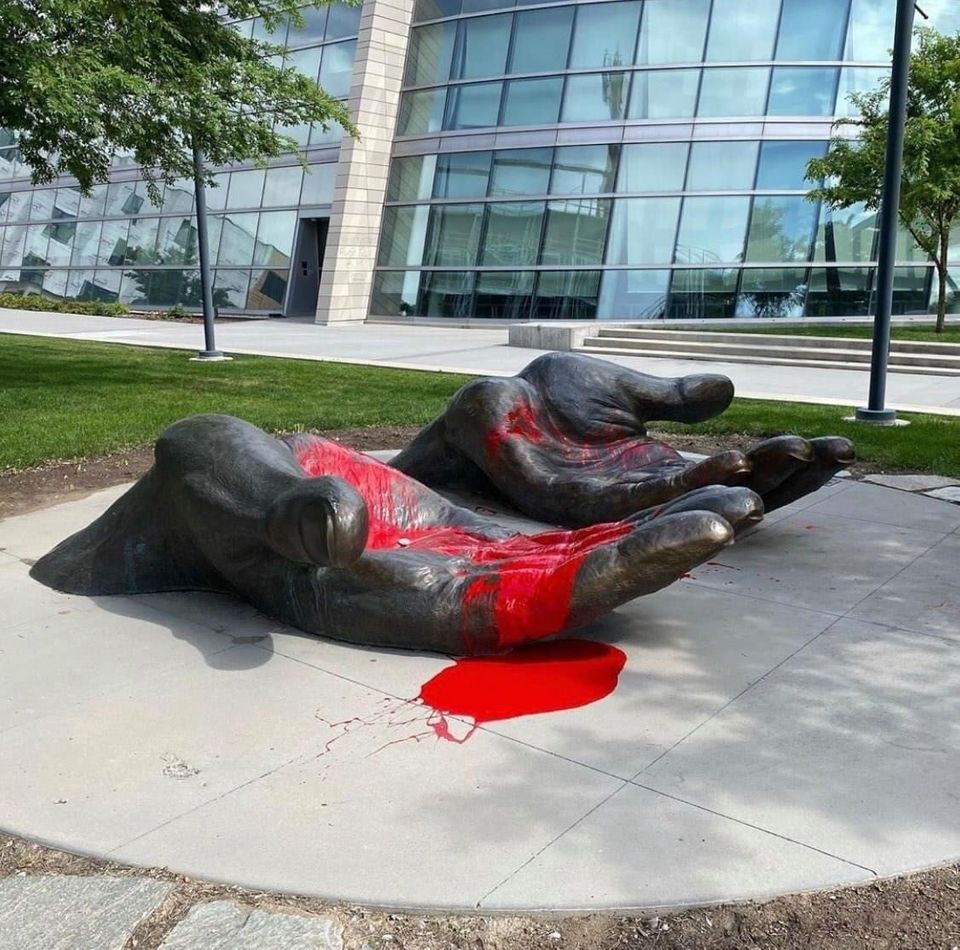 Poignantly, this weekend in Salt Lake City, demonstrators threw red paint on a bronze sculpture by the artist Gregory Ragland called Serve and Protect (2013) that is installed outside of the downtown Public Safety Building—which protestors also graffitied with messages like “fuck the police” and “enough is enough”. The artist describes the work, which shows two hands with their palms facing upward demonstrating the sign language “to serve”, as an homage to the police and other public servants, and says that it represents “an ideology of what our country expects from first responders”.

In a statement to The Art Newspaper, Ragland says that “defacing the ideal does not help strengthen the dream or working toward that goal” and he was perplexedly unsure of the intent or motive behind the vandalism. “Was it to make a statement against this sculpture? Was it an attack on the arts in general or was it an anonymous individual bent on disrespecting all first responders?” he asks, adding that vandalism of all public art is part of being a public artist.

He adds: “Someone I know thought this was a perfect collaboration of another artist working over mine. I disagree. A collaboration is mutual, and this was a selfish act of vandalism. I suggest it is the same as leaving galleries or museums unlocked so that the work held within might have collaboration performed over them. Clearly the arts in general are under attack and are always open to criticism but let’s not lose track of what this is all about—a man called George Floyd was unjustly killed.”