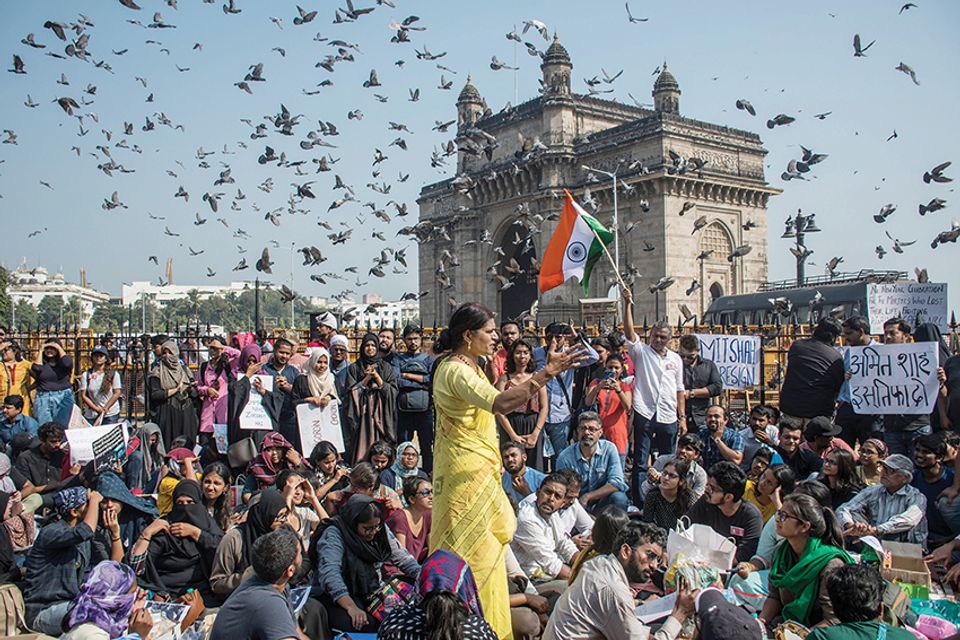 Mumbai Gallery Weekend (MGW) opened this month as protests spread across Indian cities, sparked by an attack by right-wing extremists connected to India’s ruling Bharatiya Janata Party (BJP) on the students and staff of Jawaharlal Nehru University in New Delhi. Mumbai was among the affected cities, but MGW’s organisers released a statement via social media saying the event would “continue as planned” and that it “stands with the protesters and students”.

The organisers added that it is “imperative to protect artists’ rights to peacefully speak and protest […] given the current situation in the country”, referring to violent clashes between police and protesters during demonstrations that opposed several controversial citizenship laws recently introduced by the Hindu-nationalist BJP.

Having taken part in the recent protests, Shireen Gandhy, the director of the Mumbai gallery Chemould Prescott Road, says that expressing dissent is important to her at a time “when free thought and citizenship are being challenged”.

Gandhy’s forthright views, however, are something of an exception among the MGW participants, many of whom declined to comment on the protests. According to a Mumbai dealer who asked to remain anonymous, this is due in part to practical business concerns—the government could, for instance, deny their artists visas if they make negative comments.

Despite some of the largest demonstrations taking place in New Delhi, India Art Fair (IAF), which opens to the public tomorrow, is yet to make an official statement about the protests. "As the political capital, one would expect demonstrations as in the case of any democracy," the fair's director Jagdip Jagpal tells The Art Newspaper. "As for the fair, we review our safety and security procedures regularly and implement measures we feel appropriate under varying circumstances."

In response to whether the fair would be willing to host an artist-led protest, Jagpal says that she "strongly believes in art as a form of freedom of expression" and hopes to "provide a safe platform to encourage greater exchange and widen dialogues".

But whether the platforms provided by large-scale commercial art ventures are actually able to provide robust critiques of current governmental policy remains to be seen.

For Arvind Vijaymohan, the founder and chief executive officer of the art advisory Artery India, there has been “a tangible silence” from the “fraternity of the Indian art world" and he doubts whether a statement of dissent can be made at an event like IAF or MGW. He adds, however, that "the current turbulent climate may still serve as a catalyst to create some potentially historic work".

Indeed, according to Gandhy, one must look outside the gallery sector to find art that directly deals with the issues that have provoked the demonstrations, describing the protests as “the most interesting art spaces at the moment”.

Yet even within India’s commercial spaces, one can discern a growing level of resistance towards the government.

On the other side of the country, Experimenter Gallery in Kolkata decided to cancel the opening reception for a show of architectural works by Sahil Naik, instead inviting gallery-goers to read aloud the introduction to the Indian constitution—a decision that Priyanka Raja, the gallery’s co-director, says was made “in the need of the hour”. Raja adds that making a public statement is "necessary in a country where insufficient state support leads commercial galleries to assume the roles traditionally played by cultural institutions".

Another reminder of the secular philosophy upon which India is founded came from the Mumbai auction house and gallery Prinseps, which last week held a sale of books by activists associated with India’s independence movement, including Mahatma Gandhi. Advocating for Hindu-Muslim unity and peaceful protest—as with many of today’s protesters—the sale of these texts provided a firm gesture of support towards religious tolerance and non-violent resistance.