Folkestone Triennial to include Gilbert & George billboards, an amusement arcade and the largest dance floor in town

The 20 artists taking part have been announced, with major installations heading for the seaside town 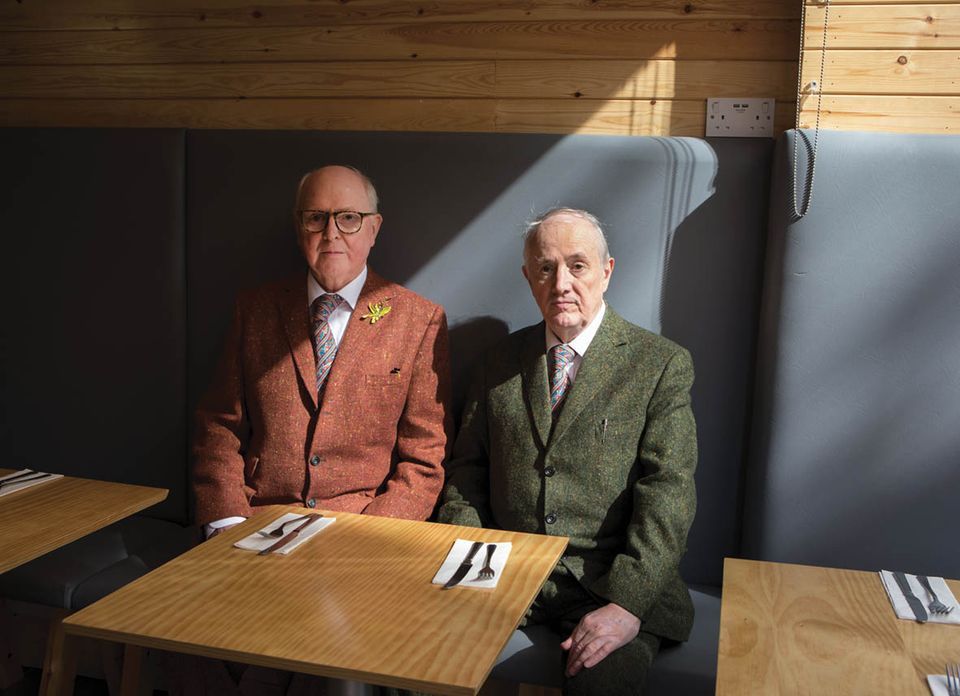 Gilbert & George's billboards will be plastered around Folkestone © David Owens

The Creative Folkestone Triennial (which this year added the adjective to the beginning of its name) has announced the 20 artists that will feature in its fifth edition this September. Among the works on show in the English seaside town will be Gilbert & George’s trademark designs plastered on billboards, new granite sculptures called Benchmark nos 1-5 installed on empty plinths by Richard Deacon, and a bold and colourful 75m-long mural by Morag Myerscough installed on a new urban sports park.

As usual, most of the works will be new commissions and exhibited outdoors, dotted around Folkestone. “We will treat the town as a gallery”, says the triennial’s curator Lewis Biggs, comparing the planning of the event to curating an exhibition in a museum. It “has to be about the context and history of Folkestone,” he says. 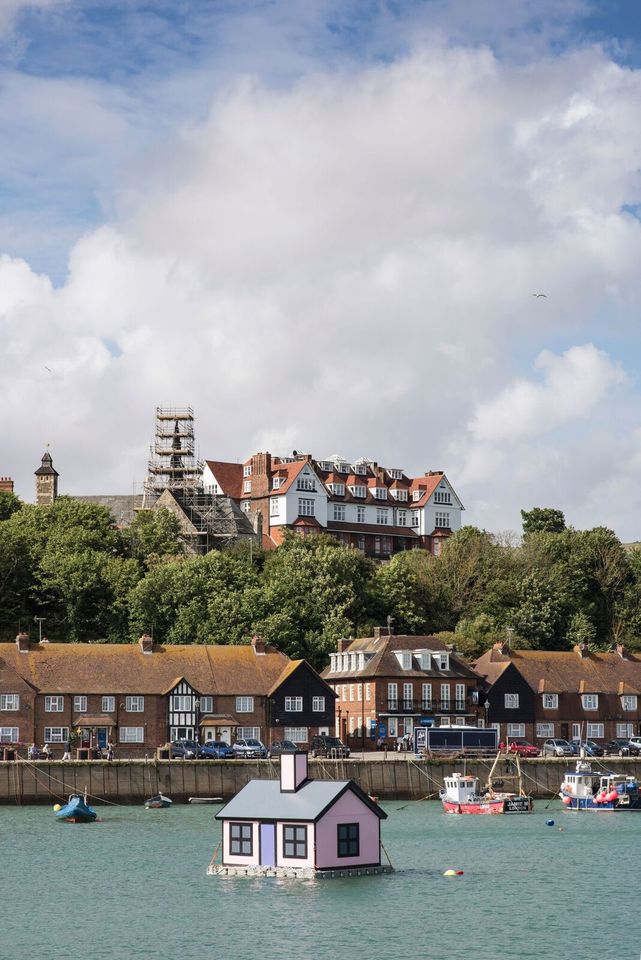 Richard Woods's Holiday Home (2017), from the previous triennial, is now a permanent feature in the town Image by Thierry Bal

To this end, genuinefake (Rachel Stella Jenkins), who lives in the town, will create an installation titled Fortune Here, consisting of arcade games and crazy golf that according to the press release will aim to “engage people in considering how citizen’s rights, responsibilities and sense of empowerment may have been replaced by a consumerist culture of gambling”. The installation will be on the former site of the once-popular Rotunda amusement arcades, which were demolished in the early 2000s.

“We will treat the town as a gallery”

The triennial has been one of the key drivers in regenerating the town’s old centre and harbour area over the past two decades, facilitated by large financial investments towards revamping buildings and encouraging people in the creative industries to move to the area. A further boost was the high-speed rail link to London St Pancras that opened in 2007, bringing in more visitors and new permanent residents.

Another part of town getting a face lift will be the Lower Saxon Way seafront, where the council will be replacing the old concrete beach huts with new wooden ones decorated in a colour scheme designed by Rana Begum. Away from the water, a former gasworks site that has been empty for several decades, will become home to a huge dance floor by Jacqueline Donachie, which will be the size of all of the town’s dance floors combined. The work, titled Sunday Morning, alludes to Folkestone’s reputation as a holiday resort, and will be accompanied by Donachie’s film The Slosh, depicting a popular Glasgow line dance. 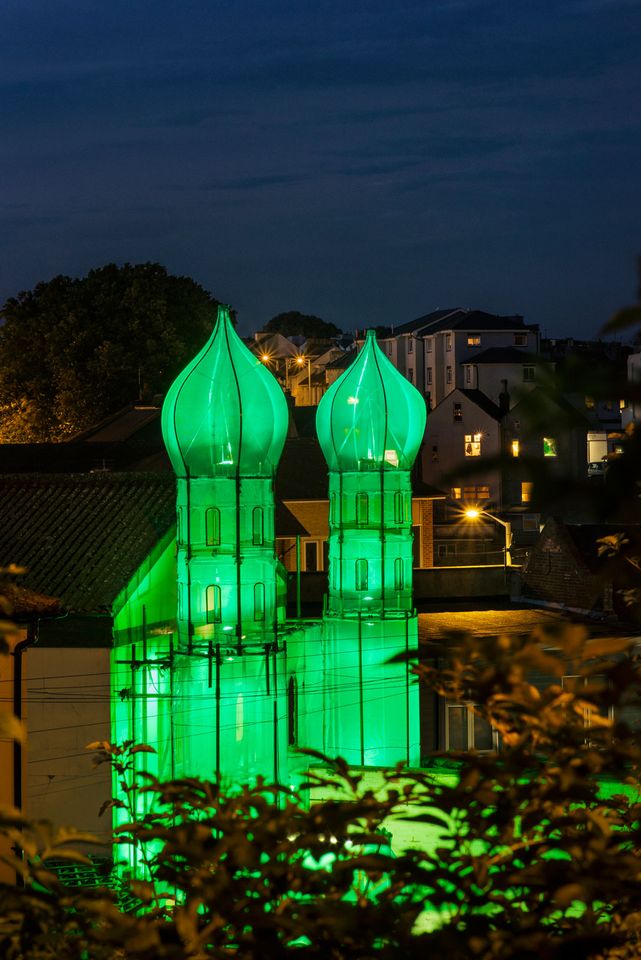 HoyCheong-Wong has been invited back for this year's Creative Folkestone Triennial, to make new work on the site of his previous Minaret (2017) installation Image Thierry Bal

HoyCheong Wong will be revisiting the site of his previous installation Minaret, where in 2017 he added a pair of temporary glowing minarets to a small mosque. For the forthcoming edition he will be working with the artist Simon Davenport and the architect Shahed Saleem to create a new work based on Islamic tiles as well as an exhibition envisaging the future development of the mosque.

This year’s theme is “the plot”, which refers to both the literary device, the physical location, as well as the concept of “place-making”. Biggs says that many people today have “lost touch with their bodies and the material world” and hopes the triennial will encourage visitors to discuss the works while exploring the town. He adds that the triennial’s audience “has to be both the international art world and the inhabitants of Folkestone—I can’t privilege one above the other.”

Visitors to the town will also be able to see several works from previous editions that have become permanent fixtures, such as Cornelia Parker’s sculpture The Folkestone Mermaid; Tracy Emin’s small bronze objects called Baby Things, and Richard Woods’s Holiday Home, a floating sculpture in the harbour. Works from the forthcoming edition may become permanent but “we always take the decision after it opens”, Biggs says, as that way “everyone is more relaxed about taking conceptual risks”.

Further works featuring in the 2020 edition include Shezad Dawood’s Leviathan Legacy 2, the second part of a virtual reality trilogy he debuted at the Venice Biennale in 2017; Sam Belinfante’s roving sculptural performance that will feature singers carrying a net through the town; and Helga Griffiths’s Oscillations, an LED installation reacting to the tide that will be housed on a rarely-used bandstand.

The triennial is organised by the arts charity Creative Folkestone, and funded by the Arts Council England, The Roger de Haan Charitable Trust and Kent County Council, among others.