After decades of neglect, a fundraising drive could restore Prinkipo Orphanage as an environmental research centre 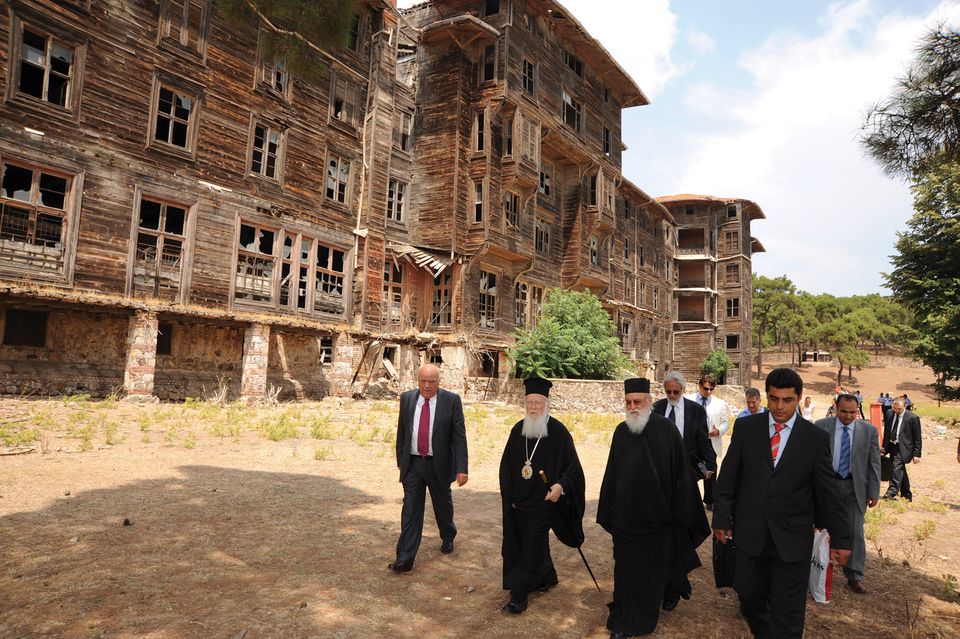 A group including the spiritual leader of Orthodox Christians, Patriarch Bartholomew, visits the dilapidated Prinkipo Orphanage. Turkey was ordered to return the site to the Ecumenical Patriarchate in a 2010 ruling by the European Court of Human Rights Photo: Nikolaos Manginas

Preservationists, artists and the spiritual leader of the world’s Greek Orthodox Christians have joined forces to save Europe’s largest timber building, the Prinkipo Orphanage, after decades of official neglect that left the behemoth building to rot.

Restoration of the 122-year-old structure could begin in 2022 after its inclusion on Europa Nostra’s list of most threatened heritage sites. The designation has galvanised grassroots rescue efforts, says Laki Vingas, who represents the Ecumenical Patriarchate, the property’s owner, and is coordinating the restoration project.

However, the building’s future is not yet secure. The restoration could cost more than €40m, according to a Europa Nostra report, and Vingas says the project will depend on the success of an international and local fundraising drive next year.

“The orphanage has had a painful history,” Vingas says. “But it is part of Istanbul’s legacy, and our community has a responsibility to safeguard it. We cannot lose this building, and so we will find a way to keep it alive.”

Prinkipo’s precarious situation underscores how economic constraints and nationalist politics can imperil cultural heritage in Turkey, especially monuments from its Christian past. The government this year defied an international backlash to reconvert the sixth-century Hagia Sophia, the former Orthodox cathedral that served as a museum from 1935, into a mosque.

The 206-room Prinkipo Orphanage, which sprawls more than 15,000 sq. m across a hilltop on the island of Buyukada in the Marmara Sea, was designed by French-Ottoman architect Alexandre Vallaury, a key figure behind several fin-de-siècle buildings in Istanbul, to serve as a luxury hotel for visitors arriving on the fabled Orient Express. Today it resembles a haunted house, ravaged by disuse and the elements. Sections of the roof have caved in, parts of the facade have buckled, and rainwater has wrecked interior floors. Unless the entire building is enclosed in scaffolding and collapsing sections are supported, it is at risk of ruin, Europa Nostra says.

The orphanage has a painful history, but it is part of Istanbul’s legacy, and our community has a responsibility to safeguard it Laki Vingas, Ecumenical Patriarchate

“You cannot find another timber structure built with these techniques on this scale from that period still standing, which makes this building so significant,” says Burcin Altinsay, the chair of Europa Nostra Turkey, which nominated the orphanage in 2018 for the Seven Most Endangered Programme, founded with the European Investment Bank.

Vallaury’s hotel never received permission to open, and in 1903 was acquired by the Greek Orthodox community. It sheltered thousands of children until 1964, when the state seized the site amid heightened tensions between Turkey and Greece, part of broader discrimination against non-Muslim citizens throughout the 20th century that forced most to leave.

A European Court of Human Rights judgement in 2010 that compelled the government to return the property to the Ecumenical Patriarchate was celebrated by both human rights advocates and preservationists.

The patriarchate, whose seat remains in Istanbul as a vestige of the Byzantine Empire, envisages opening a global environmental research centre at the site. But its flock in Turkey has dwindled to fewer than 3,000, and it lacks the funds and administrative capacity to undertake the project alone. In the meantime, the degradation continues. The Istanbul municipality stepped in to complete a digital survey with drones and laser scanning last month.

Artists have also rolled up their sleeves. Hera Buyuktasciyan, who is of Greek and Armenian descent, curated a 2018 show at a former Greek school that mixed relics and oral accounts of the orphanage with her site-specific installations, videos by Ali Kazma, photos by Murat Germen and sound design by Dilek Winchester.

Buyuktasciyan’s research in archives in Greece and Turkey now appears in a book on the exhibition that she hopes will serve as a starting point for further investigations into the building’s history. “The show was an introduction to a place many of the visitors weren’t aware of, nor of the hardships that minorities have endured,” she says. “Such a large building must find a way to sustain itself with income without losing its identity, where it can co-exist with its difficult past.”

While the government has in recent decades rebuilt a handful of Armenian, Greek and Jewish sites around the country to draw tourists, its primary focus is on the Islamic past, and millennia of non-Muslim history often get short shrift.

The building “is our common heritage and part of Europe’s”, Altinsay says. “We are so fortunate in Turkey to have these layers of history. It is sublime when we share it, but sadly sometimes we don’t realise it.”