Saying the two sides are sharply at odds, workers vote 69 to 3 in favour of a strike should progress prove elusive 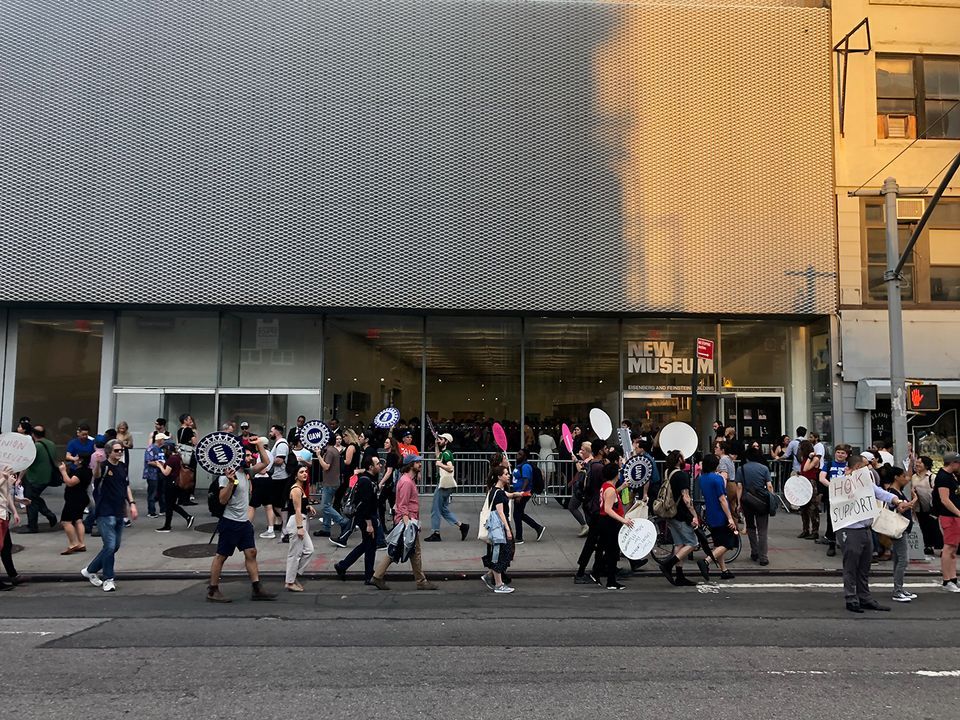 Members of the union that has represented employees of the New Museum in New York since January have voted overwhelmingly to strike if an agreement is not reached with the institution on a new contract, the union chapter announced today.

The New Museum Union (NewMuU of UAW Local 2110) has been immersed in negotiations with the museum for months on issues like pay and health benefits. Union representatives expect to continue talks all day today and possibly over the weekend, the local says, and eventually plan to set a strike deadline if no progress is made.

The vote on Thursday night on a potential strike was 69 in favour and 3 opposed, said Dana Kopel, a senior editor and publications coordinator at the museum who is a member of the union’s bargaining committee. Overall, 87 employees in professional and technical staff positions are represented by the union, she says.

Negotiators representing the New Museum have been “quite hostile” from the start, Kopel said in an interview. “The museum has been really resistant.” The union chapter has cited management’s decision to hire an anti-union consulting firm, Adams Nash Haskell & Sheridan, to guide it through labour negotiations before the union was formed.

Update: The museum, however, says the two sides have made "considerable progress":

"As has been previously reported, we have been bargaining for six months, since March 28," the institution said in a statement. "We did not receive the union’s economic proposals until the end of May. The union was unavailable for most of June. We responded with our economic counterproposal at a meeting in early July. Since that time we’ve had productive sessions and have made considerable progress: we’ve accepted many of the union’s proposals, and they’ve accepted many of ours. At no point were talks stalled. We requested additional bargaining dates in September so we could make greater progress. We are hopeful that we can bridge any remaining gaps and reach an agreement soon that benefits our staff.”

One goal of the union is to see a minimum wage of $51,000 set for full-time employees, Kopel says. She says the lowest salary level for full-time workers is currently just under $40,000.

Union members have contended that salary levels are unseemly in light of “disproportionately high” executive salaries and the museum’s current $89m capital campaign to finance an expansion designed by the star architect Rem Koolhaas. The drive for higher pay also comes amid a growing conversation about chronically low salaries for rank and file employees in the art world.

“I think we want to stay hopeful and reach an agreement,” Kopel says. “A strike is the last resort. We're willing to be here as long as it takes.”

Elsewhere on the museum labour front, workers at the fine art storage company UOVO announced today that they are organising a union with Teamsters Local 814, a New York union for professional movers and art handlers. The handlers serve art institutions including the Metropolitan Museum of Art and the Rubin Museum of Art.

about 10 hours ago
Is Van Gogh hiding at the back of this Toulouse-Lautrec drawing?