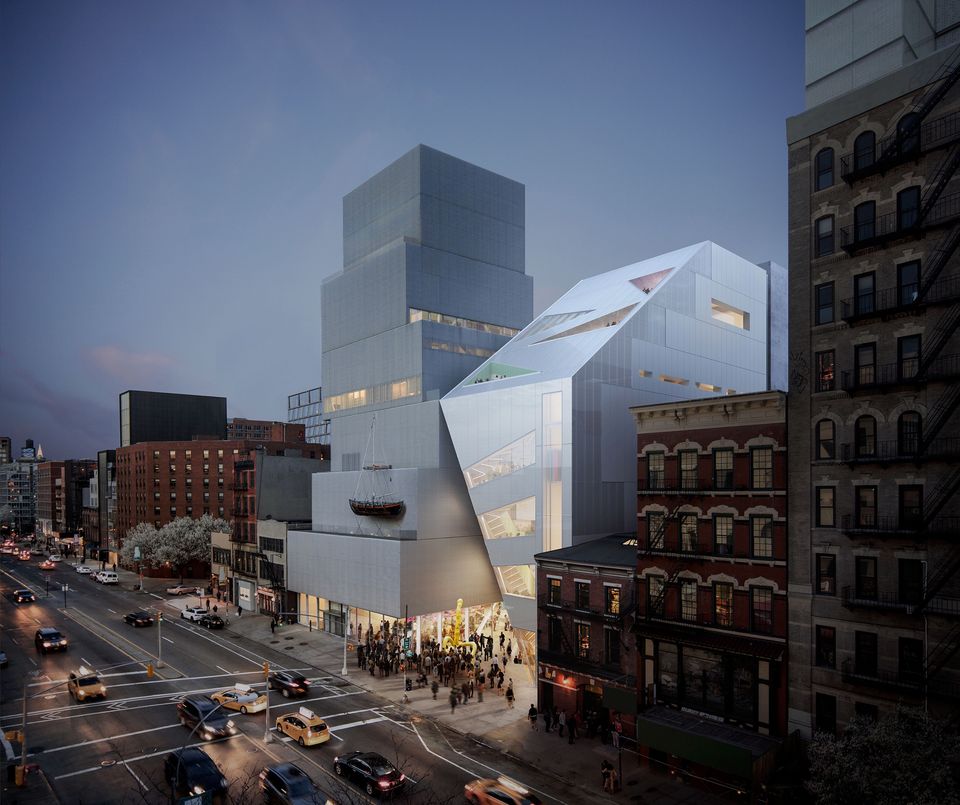 The New Museum on the Bowery in New York with a rendering of its planned addition to the right OMA/Bloomimages.de

The New Museum today unveiled plans for a new $63m addition to its 12-year-old home on the Lower East Side of New York. Designed by Rem Koolhaas and associates, the new seven-storey structure will double the institution’s exhibition space, alleviate crowds on the ground floor and provide the museum with a more fluid connection to the street.

The museum had purchased the building next door at 231 Bowery in 2008 with the intention of adapting it but ultimately decided on a ground-up approach so that the addition could smoothly connect to the original structure’s galleries. The addition, designed by Koolhaas and Shohei Shigematsu at the architectural firm OMA, allows for the new galleries to either flow out from the original spaces or to function separately. Measuring around 62,000 sq. ft, the addition will also add space for community and education programs.

With a façade of laminated glass with metal mesh, the addition is intended to echo and complement the museum’s existing building, designed by the Japanese firm Sanaa. Its ground floor will include a new restaurant, expanded lobby, bookstore and a public plaza set back at ground level, and it will improve circulation by featuring an atrium stair. Groundbreaking is expected next year, with a projected completion date of 2022.

“Since the New Museum opened on the Bowery in December 2007, the museum has become an international cultural destination welcoming millions of visitors,” Lisa Phillips, the institution’s director, said in a statement, adding, “The OMA design will provide seamless connectivity and horizontal flow between the two buildings, expanded space for our world renowned exhibitions, and access to some of our most innovative programs that the public currently cannot see.”

The museum is currently in the midst of an $89m capital campaign, including the $63m in construction costs, and says it has raised $79m so far. James Keith Brown, president of the museum’s board, said today that this figure includes a $20m lead gift to the campaign from Toby Devan Lewis, a longtime trustee, for which the OMA addition will be named.

The New Museum has recently faced a union organising effort by staff members who are not oblivious to the sums amassed in the capital campaign and are seeking better compensation. On Tuesday night, around 50 demonstrators rallied at the opening reception for the New Museum’s summer exhibitions to call attention to labour negotiations between the New Museum Union-UAW Local 2110 and the museum’s management.