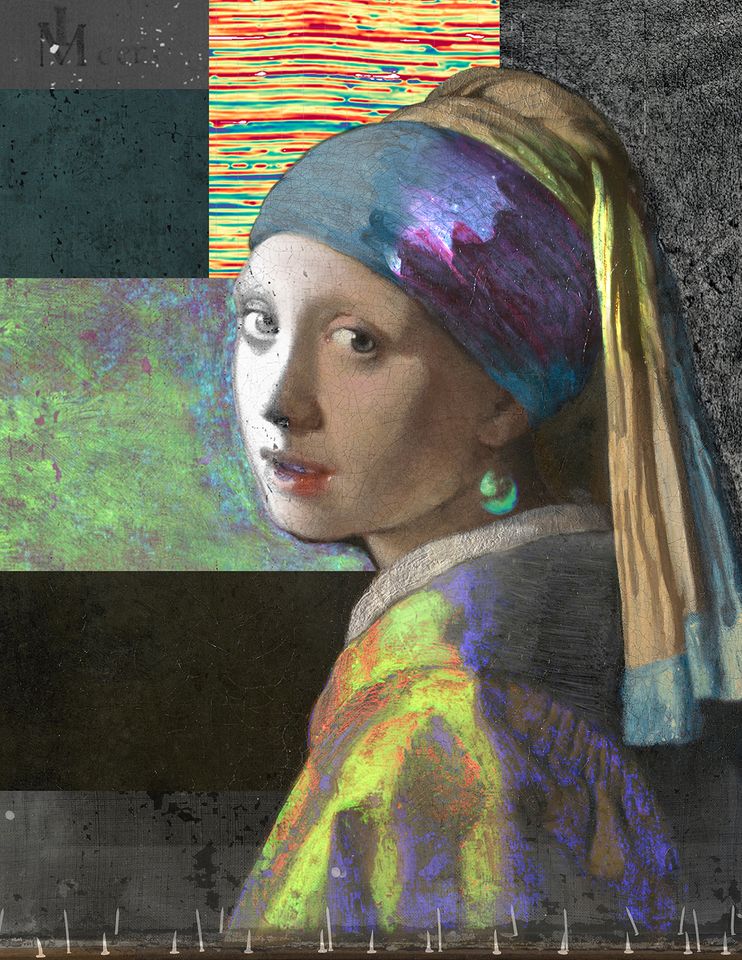 Girl with a Pearl Earring (around 1665) made up of images from the research project Girl in the Spotlight Photo: Sylvain Fleur

The results of an extensive technical examination of Johannes Vermeer’s Girl with a Pearl Earring (around 1665) will be announced early next week, giving new insights into how the Dutch artist painted one of the most famous works in the world. On 28 April, the Mauritshuis in The Hague will unveil a web page detailing the new findings, throwing new light on Vermeer’s brushwork, the use of pigments, and how he “built up” the painting in different layers.

An international team of conservators, scientists and researchers spent two weeks in early 2018 studying the painting in a specially constructed glass studio at the Mauritshuis, enabling members of the public to follow the forensic analysis.

The research project, known as The Girl in the Spotlight, was led by the Mauritshuis's paintings conservator Abbie Vandivere who worked with specialists at several other institutions including the Rijksmuseum in Amsterdam and the Delft University of Technology. The painting was last examined in 1994 during a conservation treatment.

Vandivere outlines in a blog the purpose and processes of the initiative, saying: “Which materials did Vermeer use, and where did they come from? Which techniques did Vermeer use to create subtle optical effects? What did the painting look like originally, and how has it changed?” The research involved non-invasive imaging and scanning techniques, digital microscopy and paint sample analysis.

The blog contains a wealth of detail on the canvas, pigments, oil and other materials Vermeer used to create the work. In a section called “Watching Paint Dry”, she writes: “How did Vermeer make the paint that was used in the Girl with a Pearl Earring? Like most 17th-century Dutch artists, he used oil paint.” The binding medium used to paint the work is linseed oil, made from the seeds of the flax plant, she says

In another section, she describes zooming into the surface of the painting through a microscope lens. “Our eye is drawn to the pearl, not only because it is the painting’s namesake, but because Vermeer placed it at the centre of the composition. Did you know that it might not be a pearl at all? Costume and jewellery specialists believe that it’s too big to be real. Perhaps Vermeer exaggerated it a little to make it more of a focal point of the painting… At high magnification, you can see that Vermeer painted the pearl with only a few brushstrokes of lead white.”

UPDATE: The discoveries have since been detailed online. "One of the most surprising findings was that the background is not simply an empty dark space; Vermeer painted the Girl in front of a green curtain. Imaging techniques visualised diagonal lines and colour variations that suggest folded fabric in the upper right-hand corner of the painting," says the researchers. Also, macro-X-ray fluorescence scanning and microscopic examination also revealed that Vermeer painted tiny hairs around both eyes (to the naked eye, the Girl has always appeared to have had no eyelashes).

The new research also revealed that Vermeer made changes to the composition during the painting process—"the position of the ear, the top of the headscarf and the back of the neck were shifted," according to the researchers. The research also identified and accurately mapped Vermeer’s colour palette for the first time: red (vermilion, and red lake made from cochineal), various shades of yellow and brown (earth pigments, lead-tin yellow and yellow lake), blue (ultramarine and indigo), shades of black (charcoal and bone black) and white (two kinds of lead white).