New York City to move one controversial monument, while others remain

A commission created to review “symbols of hate” on city property has decided most will stay put with signage added to explain their history, while new works will be created to honour underrepresented communities 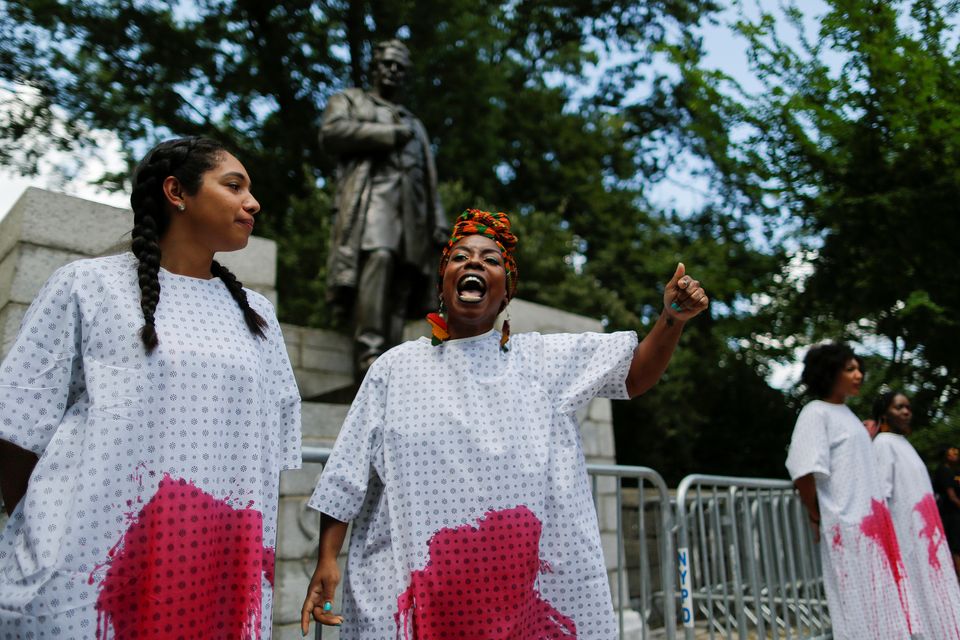 Women from Black Youth Project 100 protest against white supremacy in front of a statue of J. Marion Sims in New York REUTERS/Eduardo Munoz

After a 90-day review, a New York City commission formed by Mayor Bill de Blasio to decide the fate of statues, monuments and street names connected to “symbols of hate” have announced that a just one such memorial will be removed: a statue in Central Park of the physician J. Marion Sims, who developed advances in gynaecology through surgical experimentation on enslaved women, will be relocated to his gravesite in Brooklyn.

Other problematic memorials, including a statue of Christopher Columbus, who is remembered as a hero by many Italian-Americans and a ruthless murderer by Native American groups, and a plaque dedicated to the French Nazi collaborator Philippe Pétain, will have markers added to contextualise their historical significance, the committee decided. The mayor also announced that the Department of Cultural Affairs would set aside $10m over the next four years to commission new public works of art “honoring various communities that are underrepresented on city property”, with research for this project backed by a $250,000 grant from the Ford Foundation.

“Reckoning with our collective histories is a complicated undertaking with no easy solution,” de Blasio said in a statement. “Our approach will focus on adding detail and nuance to–instead of removing entirely–the representations of these histories. And we’ll be taking a hard look at who has been left out and seeing where we can add new work to ensure our public spaces reflect the diversity and values of our great city.”

The 18-member panel, including civil rights activists and creatives such as Harry Belafonte and Michael Arad led by New York’s commissioner of cultural affairs, Tom Finkelpearl, was created on the heels of the deadly white nationalist rally in Charlottesville, Virginia that erupted last August over the removal of two Confederate monuments. This led to a nationwide protest against such memorials. In New York, two sculptures honouring Confederate generals at the Bronx Community College were removed last year. And a statue of Theodore Roosevelt outside of the American Museum of Natural History was defaced with red paint by activists who defended the move “an act of applied art criticism”.