The Dutch art historian, who worked on the Rembrandt Research Project for 47 years, made radical changes to the study of the Old Master painter 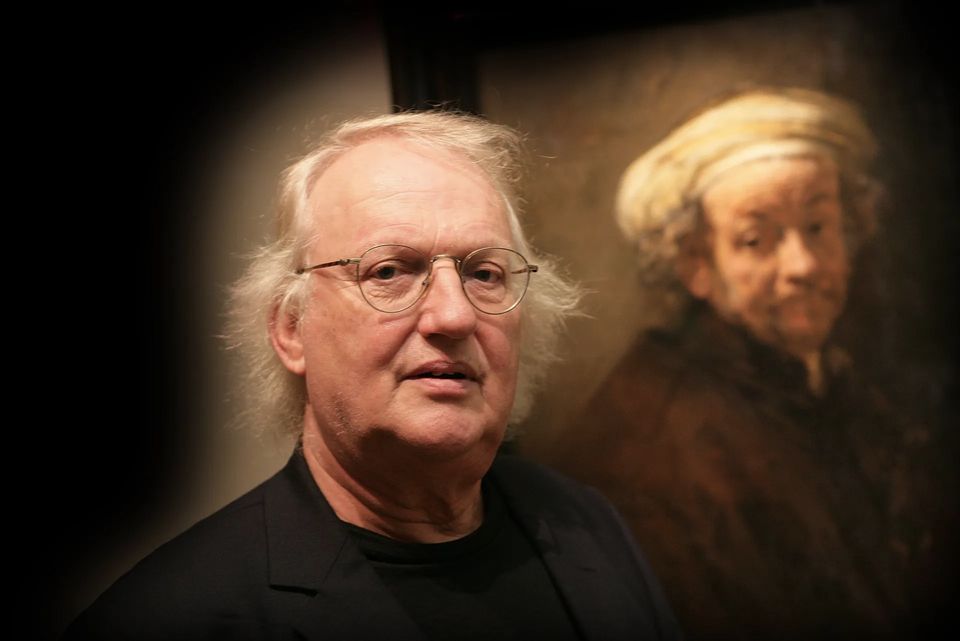 Ernst van de Wetering; in the Rijksmuseum in 20005 with Rembrandt’s self-portrait as the Apostle Paul, 1661. Photo: Vincent Mentzel

What makes a Rembrandt? For almost half a century Ernst van de Wetering, a formidable, larger-than-life Dutchman and art historian who died aged 83 last week, dedicated his life to this question. Van de Wetering's family announced on Monday that he passed away on 11 August in Amsterdam. It was here that he spent his final years in his house surrounded by his family and following his passions for sketching, painting and music, possessing abilities in the flute, clarinet, saxophone and viola.

Ernst van de Wetering started out as a painter and teacher at the Royal Academy of Art, The Hague, before being approached in 1968 by Joshua Bruyn, a scholar of Netherlandish art, who offered him a job as part time assistant on a new project at the University of Amsterdam studying the complete opus of Rembrandt’s paintings. "I hardly knew anything about Rembrandt at the time," he would later tell me in a 2014 interview, "and I thought it would be interesting to study the artist for a couple of years." He eventually replaced Bruyn as head of the Rembrandt Research Project (RRP), a position he retained for 21 years, retiring after completing its seventh volume.

No other artist has ever had the privilege of such thorough research. The RRP was a unique body formed of several art historians, with contributions from scientists of varying disciplines. They started by screening the 624 paintings attributed to Rembrandt in the 1935 catalogue raisonné by Abraham Bredius. More than half did not survive. Ernst van de Wetering’s attributed this failure to "connoisseurship," the illusion cultivated by many specialists of the day that they were able to determine an attribution "in the glimpse of an eye", to quote the likes of Bredius or Max Friedländer.

Starting at a time when most paintings in private collections were hardly accessible, travel was difficult and in some cases the research material available was made up of black-and-white photography, RRP took care to base its opinions on the analysis of pigments and other materials like the wood of the canvas’s tables. But Ernst also required that the forensic findings be interpreted by an art historian who had a holistic view of the artist’s times, techniques and work. Far from the romantic view of a painter confronting his inner thoughts by spreading self-portraits, he saw Rembrandt as a scholar who was always "a thinker of his own work", down to the most minute detail of each composition.

Each Friday, RRP members would discuss the new findings around a table laden with plates of sandwiches. Ernst van de Wetering calculated that more than 1,000 of these "Rembrandt lunches" took place between 1969 and 1993. However, tensions rose inside the collegium and Van de Wetering felt they had become stuck in a "routine of attributions and dis-attributions," making big headlines in the media, but with a growing degree of subjectivity. The breaking point came when the project dismissed the Louvre’s Supper at Emmaus (1648) and Van de Wetering publicly expressed his disagreement (the work now is unanimously admitted as a Rembrandt). In 1993, Joshua Bruyn and three of the founders announced their resignation.

In 2014, when he decided to retire, Ernst van de Wetering triggered a new shock wave, announcing at the National Gallery in London that in the last volume entitled Rembrandt Painting Revisited he had reinstated 70 works that were stripped of their attribution in the project’s early years.

Not everyone approved. Christopher Brown, former director of the Ashmolean Museum in Oxford, was stunned by this "radical reversal of a project that took too long". The Metropolitan’s curator Walter Liedtke claimed that attributions to Rembrandt could not be "one man’s opinion" but needed "a consensus", something that Van de Wetering strongly refuted. "You have not read my book yet, I am not a fool! All these observations are carefully motivated," he claimed before receiving a standing ovation from the 200 scholars present.

The truth is that Ernst had no time for diplomacy and some of his colleagues did not appreciate his rather brusque manners. He also had a startling sense of spontaneity and humour. During a lunch with Thomas Kaplan, carried away by his demonstration, he dived his finger in the whipped cream of the billionaire collector’s dessert exclaiming: "You see, this is the way Rembrandt would draw it!". Today a researcher like Gunnar Heydenreich, who leads a similar project on Cranach, confesses that he was certainly "inspired by Van de Wetering and his methodology".

When you saw Ernst arriving on his bike at the Rembrandthuis, always dishevelled, but smiling broadly, to show you the last self-portrait he had discovered under heavy repaints, you knew that he was a scholar of complete integrity, unafraid of upsetting the applecart and ready to reshape art history.