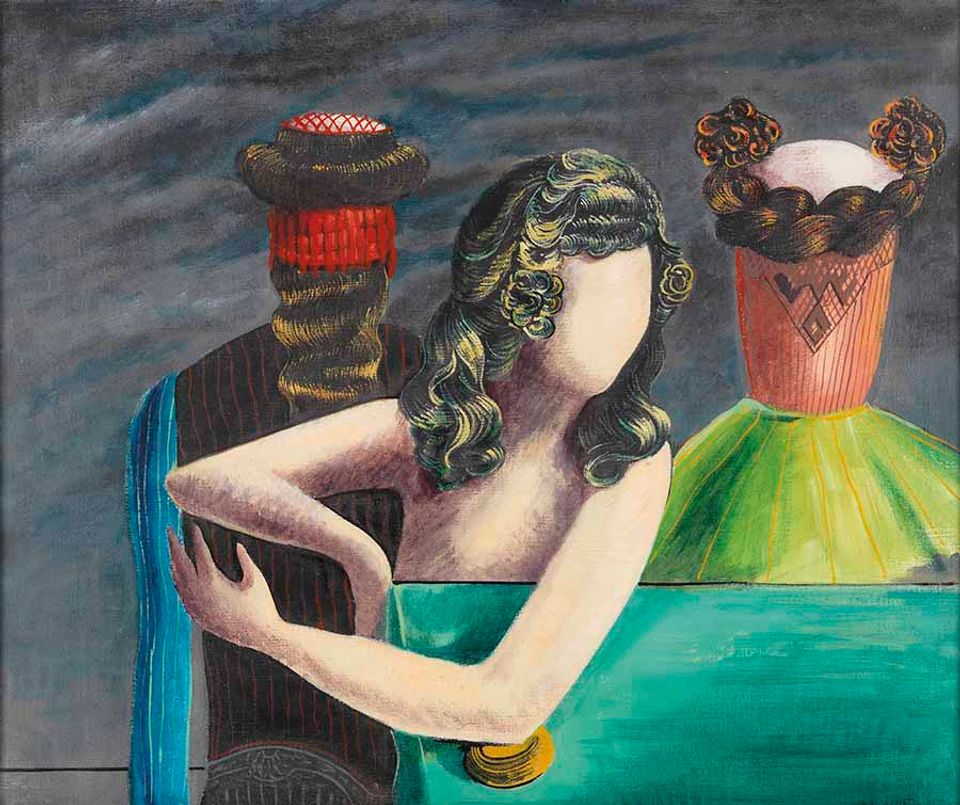 This hallucinatory oil painting of three faceless subjects belongs to a small group of Dadaist works that the German artist created in Paris between 1923 and 1925. The sexually charged work suggests autobiographical themes, likely referencing the three-year "ménage à trois" between Ernst, the Russian Surrealist muse Gala and the poet Paul Éluard, her husband at the time. Gala and Éluard met Ernst in Paris in 1921 at an exhibition of the artist's work organised by André Breton. The three soon became inseparable, with Ernst, who had left his own wife and children before coming to Paris, living with the couple for a time. The year this work was painted, however, Éluard suddenly left for Southeast Asia and there were rumours of his suicide, as he released a collection of poems called Mourir de ne pas mourir (Dying of Not Dying), featuring his portrait painted by Ernst on the cover. Gala and Ernst travelled to Singapore to find Éluard, and Gala and Éluard returned to France soon after, without Ernst. The work has been published in several volumes on Ernst's work and life. Another figurative oil painting from 1924 called Le Couple (L'Accolade) made around $9m at Christie's New York in 2015. 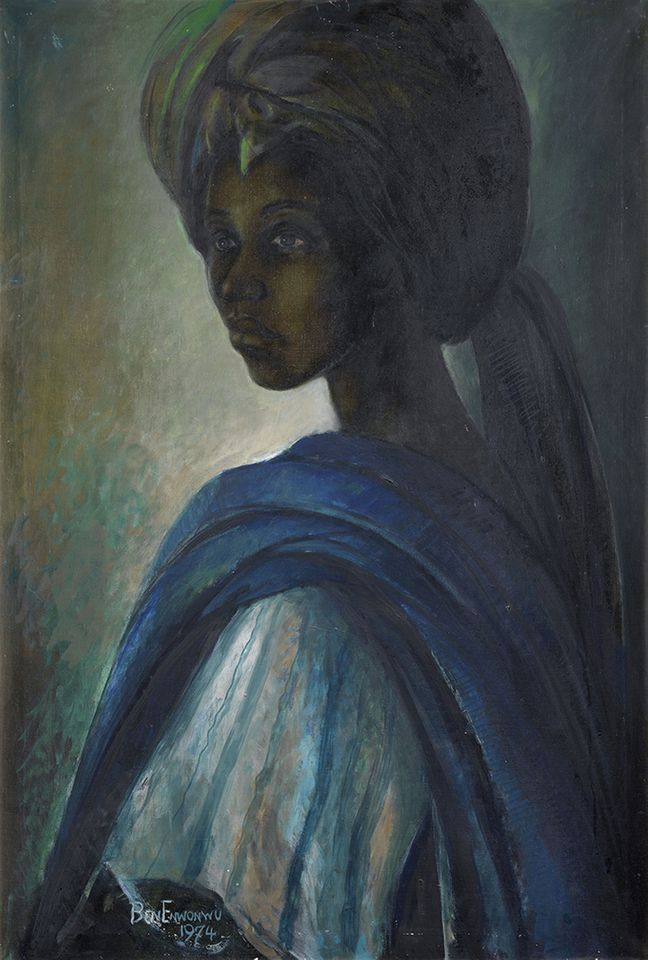 This recently rediscovered portrait of the Yoruba princess Adetutu Ademiluyi, known as Princess Tutu, could set a new record for a Modern work of art by an African artist. The oil painting was found last December in a North London home after being lost for more than four decades, and belongs to a group of three portraits that the Igbo artist Ben Enwonwu painted of the princess after the reconciliation following the Biafran War in Nigeria. The other two portraits remain lost, although prints exist. Giles Peppiatt, the auction house's director of African art, tells The Art Newspaper that he had "been aware of this work, this mythical lost painting, for more than ten years", and that he has examined various fake versions. The painting was last seen in an exhibition in Lagos in 1975; it is unclear how the present owners acquired it. The consignors, who inherited the painting and wish to remain anonymous, knew little about the portrait other than the name of the artist, and contacted Bonhams after doing a Google search on Enwonwu's auction records, which have been set by the auction house in every medium. In 2016, an oil painting by the artist called Spirit of Ogolo (1988), achieved £218,5000, and last year the sculpture Anyanwu (1954) made an artist-record £353,000. Peppiatt adds that he has "found what's been called the African Mona Lisa—this work is indeed a masterpiece". 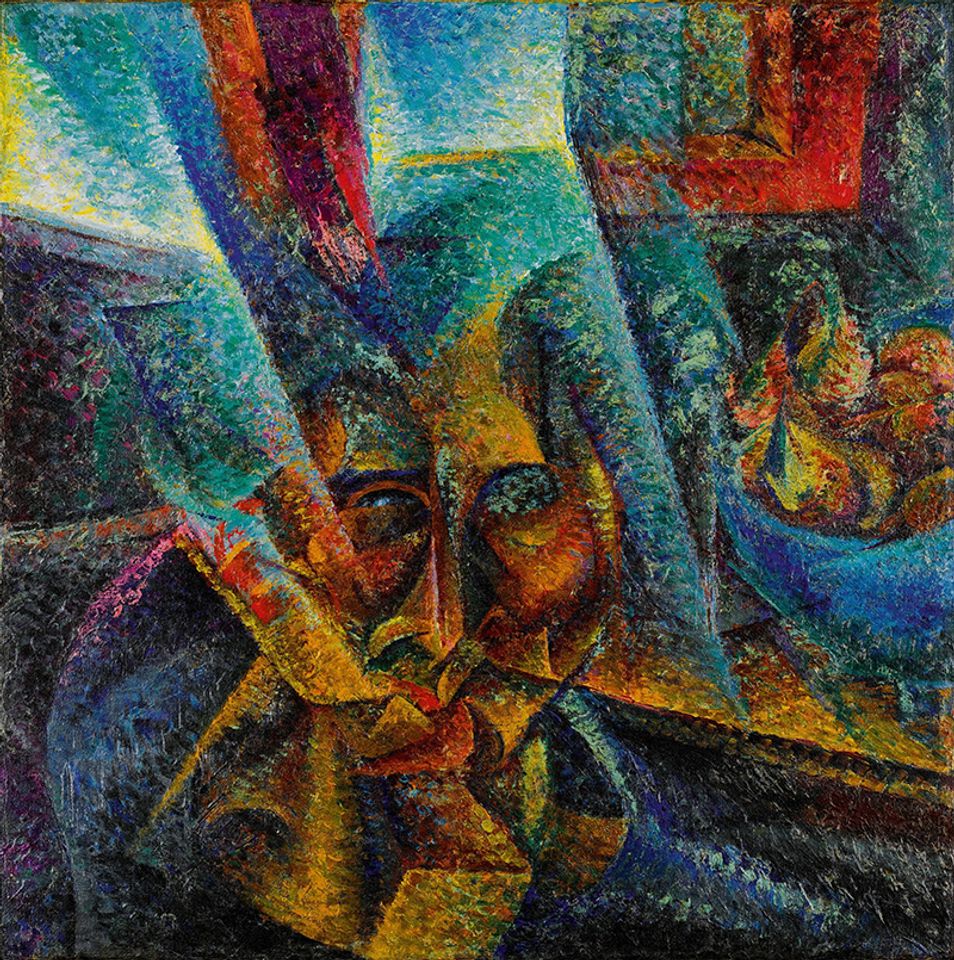 This kinetic work is the first oil painting of Umberto Boccioni's celebrated Futurist period to surface at auction in nearly 30 years. One year prior to creating the piece, Boccioni travelled to Paris and visited the gallery of Daniel-Henry Kahnweiler, where he saw works by Georges Braque and Pablo Picasso and met the critic Guillaume Apollinaire, who wrote extensively on Cubism. After this visit, Cubist elements emerged in Boccioni's work, which he harmonised with his previous Symbolist and Divisionist influences. His Futurist experiment, however, was short lived: Boccioni joined the Italian military in 1915 at the outbreak of the First World War and died during a training exercise the following year. Few works from this period remain in private hands, with most belonging to museum collections like that of the Museum of Modern Art, New York and the Museo del Novecento, Milan. This painting was first acquired by the Italian screenwriter Bruno Carradini, who was associated with the Futurist movement, and later belonged to the Milanese writer Margherita Sarfatti, best known as an art critic and a mistress of Benito Mussolini. Boccioni's record price for a Futurist work in oils stands at $605,000, set in 1990 for Il Bevitore (1914); a watercolour, ink and tempura study called Foot-baller (1913) set the artist's overall record in 2007 when it was sold by Christie's Milan for around €1.9m.