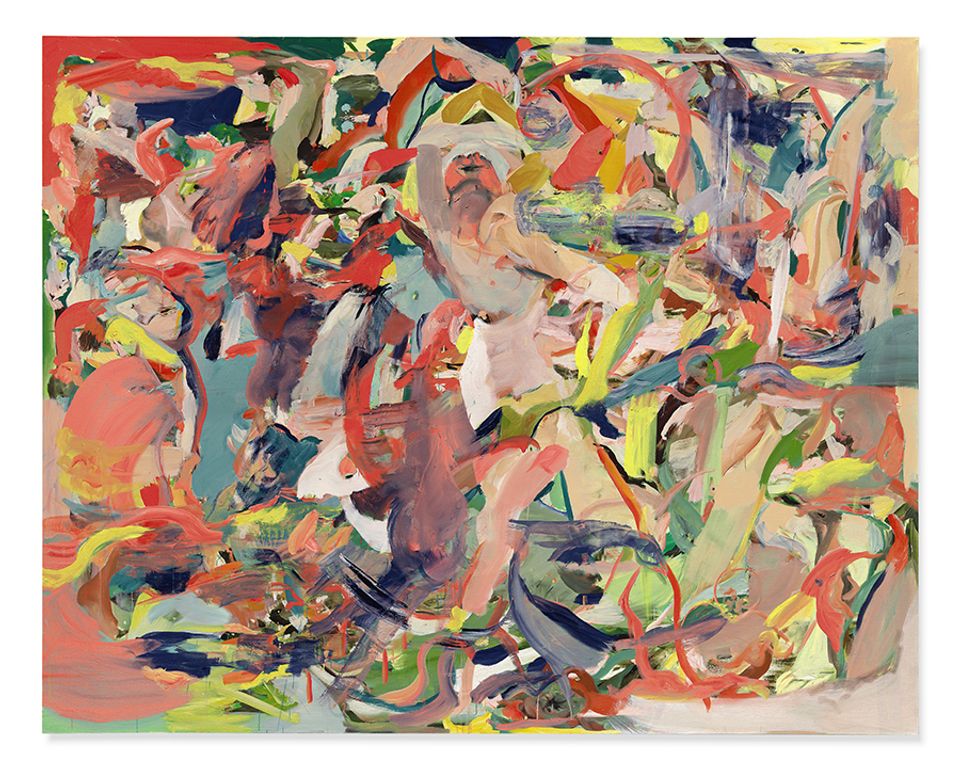 This oil on linen shows a frenzy of flesh tones and hues of orange, green, yellow and blue, and, as the title suggests, coincided with the UK artist’s return to England after more than a decade in New York. Although Brown has also produced more figurative and brazenly erotic compositions, this painting shows her gradual transition toward pure abstraction and is charged with influence from Willem de Kooning and other Abstract Expressionists. In a 2012 interview, Brown said “there is a line that I’m always striving for that’s not half-way between figuration and abstraction, it is both”. The artist, who is now represented by the New York dealer Paula Cooper after 15 years with Gagosian Gallery, is included in major collections, including that of the Metropolitan Museum of Art, New York, and the Tate Gallery of London, among others, and has a loyal following among collectors including Elton John and the philanthropist Michael Ovitz. Last June, Sotheby’s London set the artist’s record with an abstract oil painting called The Girl Who Had Everything (1998), which made around £1.9m (est £800,000-£1.2m). 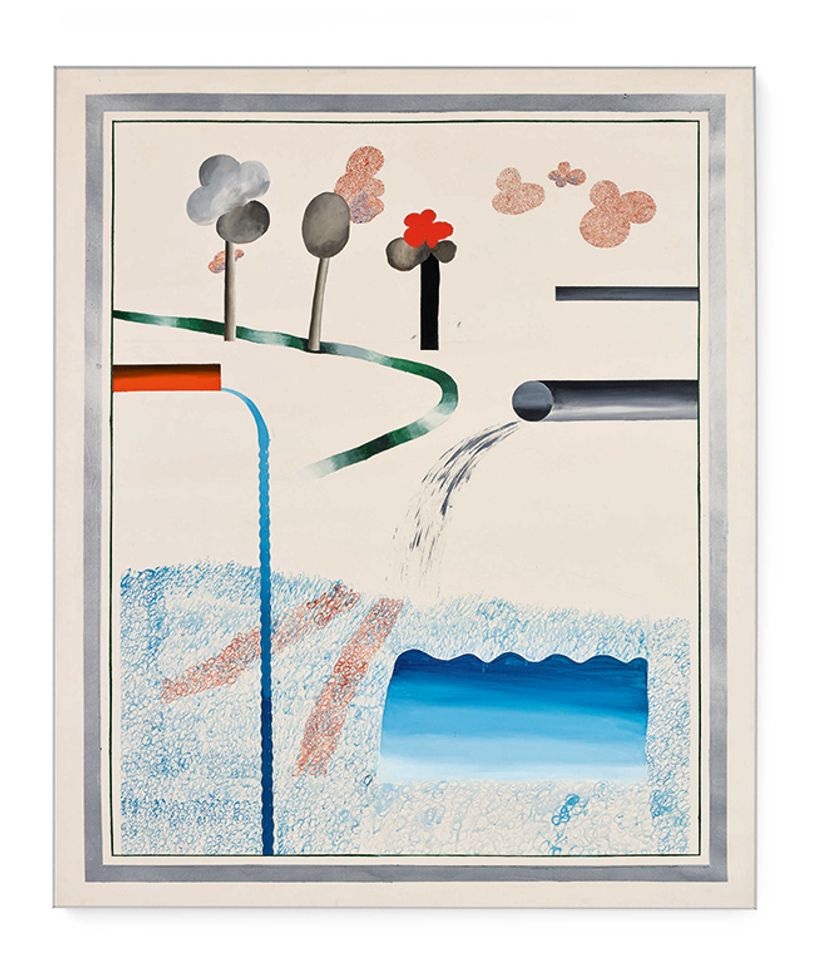 The swimming pool is a recurrent theme of the UK artist's work from the 1960s, when Hockney lived in California and painted symbols of the West Coast lifestyle. This canvas, made with a new-at-the-time acrylic medium and taking a rather spare, deconstructed tack than his more naturalistic depictions, debuted in a sold-out 1965 exhibition at the John Kasmin gallery of London, the artist's first show after returning to England from America. Such "pool paintings" from the period are scarce in the market; James Sevier, the auction house's senior director and specialist of Contemporary art in London, says, "You can count on just one hand the number of large scale canvases David Hockney [made] in the 1960s that have sold at auction in the last ten years. These early pool paintings are especially rare." The auction house set the record for a work from this period in 2006 with another poolside composition called The Splash (1966), which made around £2.9m. The estimate here reflects a surge of interest in the artist's work surrounding a travelling survey that recently closed in New York. The work was acquired at Sotheby's New York by the present consignor in 1989 for around $500,000 and has been "hanging on the same wall in a London home since then", adds Sevier. 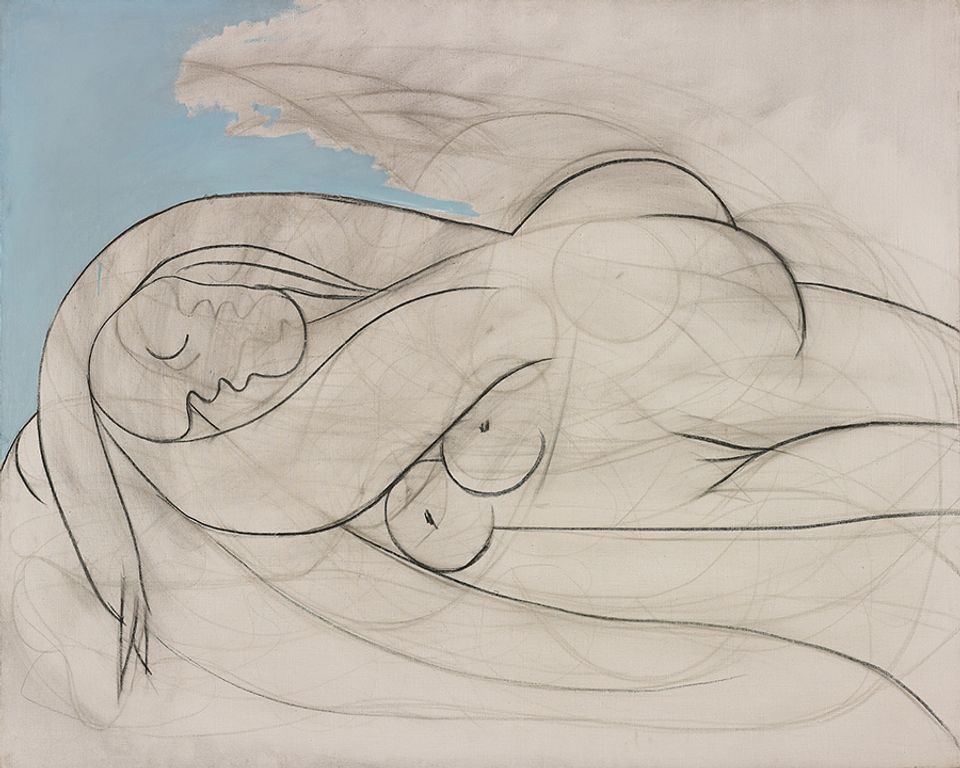 This dreamy odalisque, made in oil and charcoal on canvas, belongs to a series of paintings the Catalan artist created of his mistress Marie-Thérèse Walter in what Hugues Joffre, a senior advisor for the auction house, calls Picasso's "annus mirabilis" of 1932. Of Walter, the artist later said he "realised that I had before me what I had always been dreaming about" when he met her in Paris in 1927. By 1932, Picasso—who was still married to Olga Khokhlova—was depicting his young muse freely, and in this work, Walter's sleeping body is painted "against a background of frenzied lines, through a series of swooping curves [that] hint at Picasso's fascination with her body", Joffre says. The tenderness and passion would not last; in four years' time the artist would meet the photographer Dora Maar, and his work took a more anguished and Cubistic turn. Still, Picasso never parted with this work—Jacqueline Roque, the artist's "last muse", inherited the piece and bequeathed to her daughter from a previous marriage. The painting has been shown in various major institutions, including the Tate Modern, London, and the Museum of Modern Art, New York, and was last shown at the Kunstmuseum Bern between 2006 and 2012, where it was on loan from the present consignor. The picture will be auctioned on 8 March, the opening day of the major show The EY Exhibition: Picasso 1932 - Love, Fame, Tragedy at the Tate Modern (through 9 September).