Objects of desire: what dealers are taking to Tefaf

Visitors can expect to see an eclectic mix at Maastricht 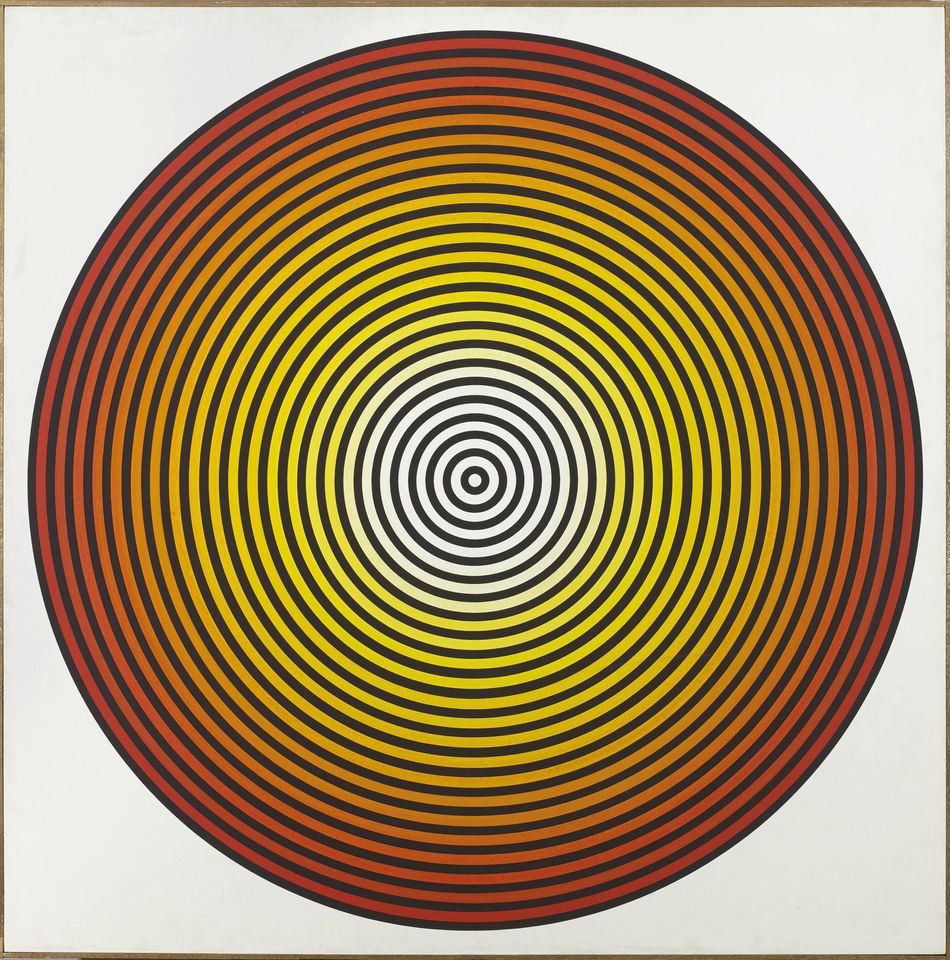 The Japanese Op-artist Tadasuke Kuwayama, better known as Tadasky, dedicated his artistic career to geometric forms, and the circle in particular. His preoccupation with the shape led him to create a special rotating turntable-like wheel with which to paint perfect circles. Tadasky’s work rose to prominence after six of his paintings were included in the seminal Op art exhibition The Responsive Eye at the Museum of Modern Art (MoMA) in New York in 1965—the same year that this work was made. His paintings are included in many major US and Japanese museum collections, including MoMA and the Museum of Contemporary Art, Nagaoka. The work is on offer for £65,000. A.D. 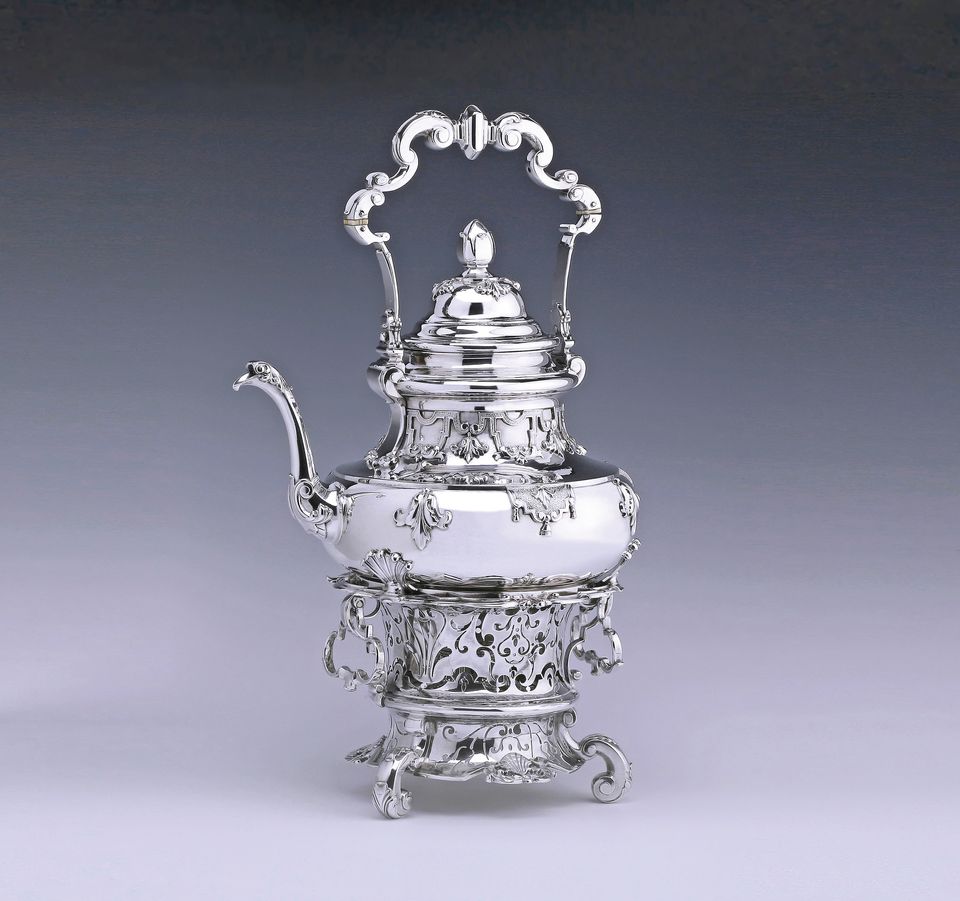 This kettle, made by the Amsterdam-based silversmith François Lembregts, is one of the most elaborately ornamented examples of Dutch silver made in the Louis XIV style, says The Hague-based dealer Emiel Aardewerk. What sets this piece apart is the fact that, usually, 18th-century Dutch silverware was known for its conservative design and size, but this piece is quite the opposite. One theory for this is that it was commissioned by a newly wealthy merchant eager to show off the size of his wallet and elicit envy from guests as they were served tea. Only a few objects by Lembregts remain, making this piece rarer still. The work is on offer for €275,000. E.R. 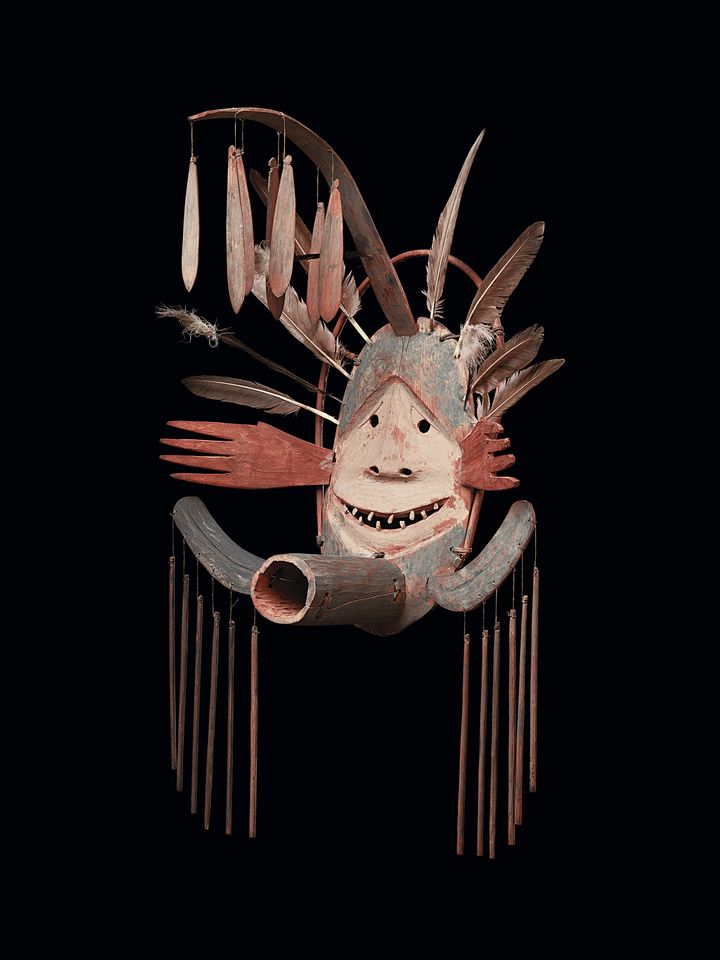 This Yup’ik ceremonial mask, made from wood, feathers, sinew and thread, hung in the New York studio of the Surrealist Enrico Donati for more than 60 years until the artist’s death in 2008. Early champions of Native American art, Donati and his fellow Surrealists, including André Breton, were inspired by the dream-based imagery of these masks made by Alaska’s Yup’ik Eskimos. This particular piece represents a wind spirit who has the power to bring warm weather. It is among a group of masks acquired in the early 1900s by the trader Adam Hollis Twitchell, who went to great lengths to both collect and record the stories associated with them. He sold them to George Gustav Heye, whose collection formed the basis of the National Museum for the American Indian. They re-entered the market in the 1940s when the museum experienced financial trouble. The Louvre in Paris and Basel’s Beyeler Foundation have masks by the same artist. Donald Ellis, a specialist in historic Native American art who is exhibiting at Tefaf for the first time, is asking €4.8m for the work. E.S. 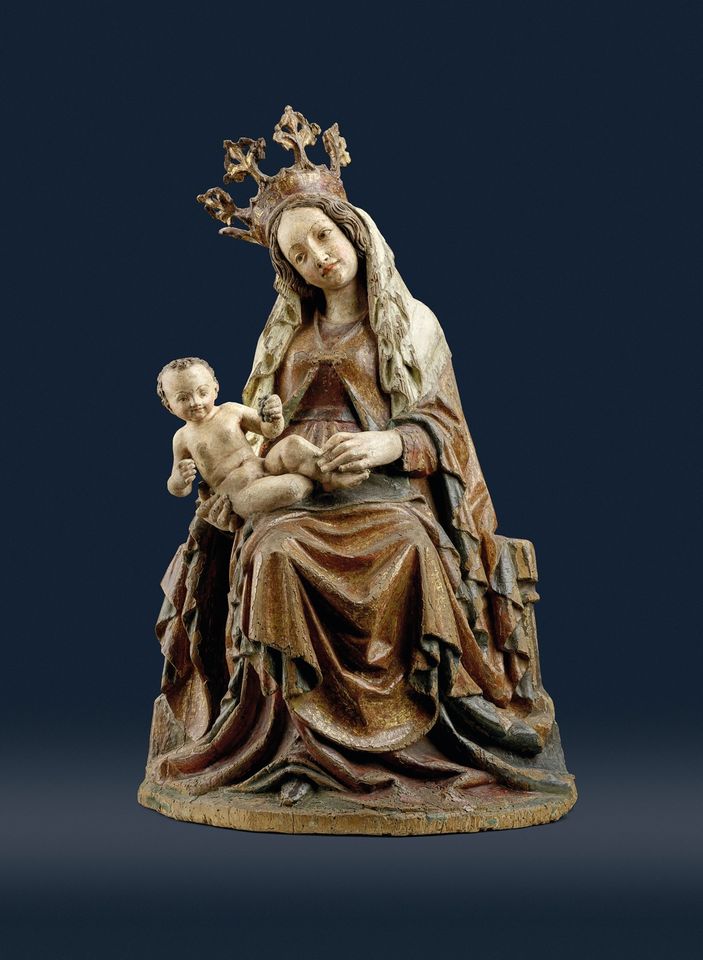 Virgin and Child, Salzburg (around 1420)

This wooden Virgin and Child is carved in the popular German weicher stil (beautiful style), featuring a sweet, gentle expression, typically elaborate cascading folds on her veil and cloak, and a gilt crown surmounted by large fleurons. What makes it unusual, however, is that the figures are seated. “This Virgin differs from the distinctively swaying standing postures usually found in Beautiful Madonnas, thus making the sculpture a rare example of the artistic inventiveness and range of variation during the late Gothic era,” says Elisabeth Hofmann at Senger Bamberg Kunsthandel, Bamberg. The back of the sculpture is hollowed out, indicating that it was likely once fixed to a church altarpiece. The German dealer is asking €125,000 for the piece. A.D.

The Meiji era (1868-1912) was a period of international artistic exchange between Japan and the West, and Galerie Tanakaya will show a selection of works on paper by artists who travelled to Japan during this time. This watercolour of a young waiter was painted by the French artist Félix Régamey, who travelled to Japan in 1876 with the industrialist and collector Émile Guimet, whose Asian art collection formed the basis of the Musée Guimet in Paris. The watercolour was reproduced, along with many other works by Régamey, for Guimet’s multi-volume Promenades Japonaises (1878 and 1880), and accompanies an account of the pair having lunch in Osawa: “We are served by a handsome waiter of sixteen who raised his kimono to be more alert; he looks like a young Florentine lord of the sixteenth century who has forgotten to put on his silk jersey.” The gallery is asking a five-figure sum for the work. A.D. 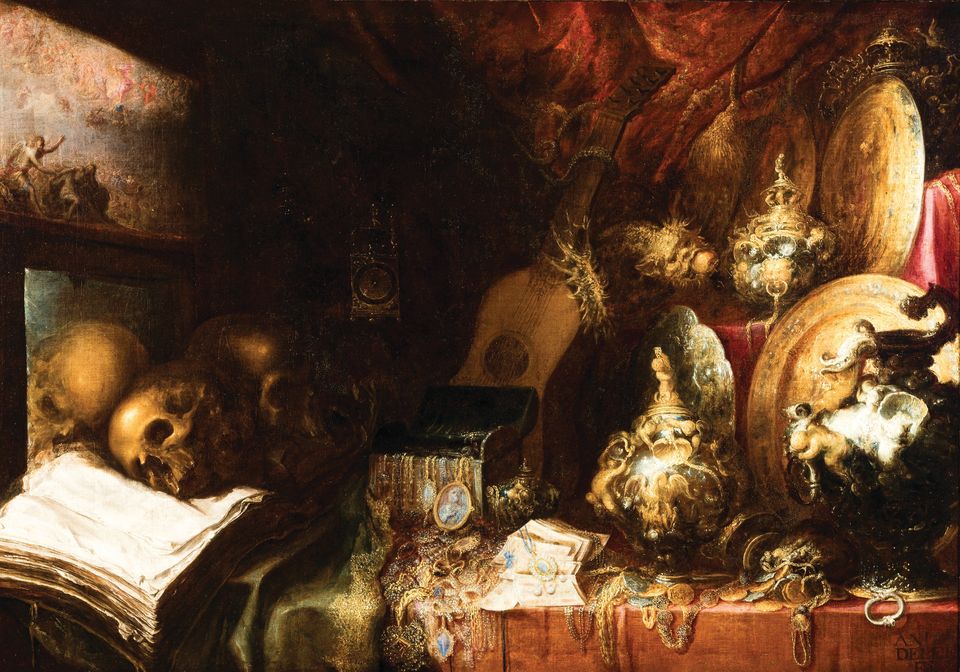 New discoveries, rediscoveries, mysterious artists and workshops: Old Master works are often the most interesting and alluring pieces to be found at fairs such as Tefaf, and Andrés de Leito’s Vanitas is no exception. De Leito is widely considered to be one of the most enigmatic figures of the Spanish Baroque, and we know hardly anything about him, especially when compared with other leading Spanish artists, such as Diego Velázquez, Francisco de Zurbarán and Jusepe de Ribera. This unpublished painting is only the fifth known vanitas painting by the artist; the other four are already in private collections. The gallery is asking around €1m for the work. E.R. 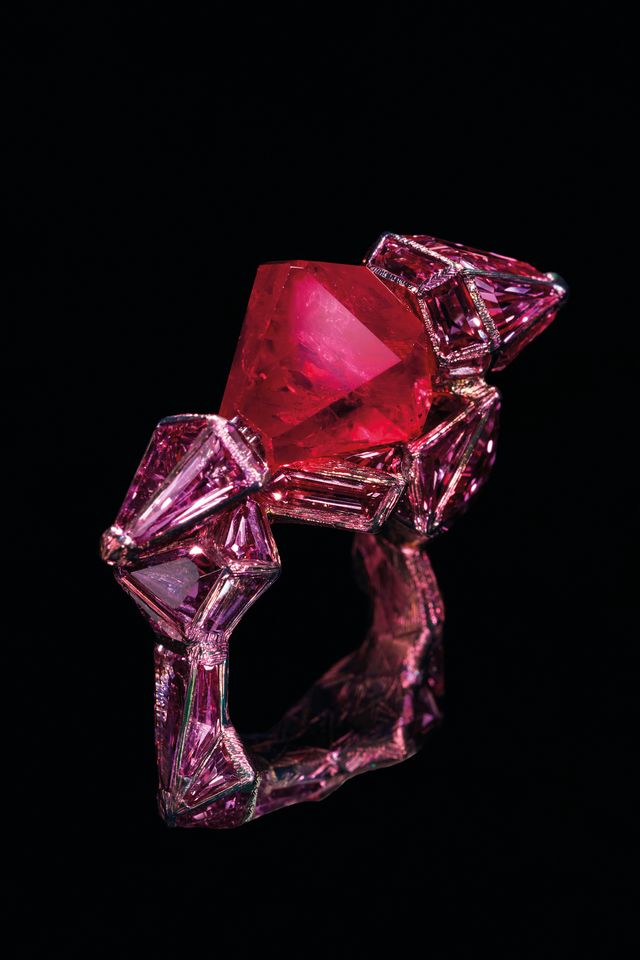 Geometric pink sapphires form the band and setting for this ring’s 17.58ct. hexagonal Burmese ruby. The Hong Kong-based jeweller Wallace Chan describes the piece as a “dream castle inspired by the mysterious, microscopic world of nature” found in gemstones and likens the sapphires to glaciers and the ruby—“the queen of all gems”—to a mountain. Chan, who founded his workshop 43 years ago, is celebrated for his illusionary carving technique known as the “Wallace cut”. This is his second time in Maastricht; he debuted at the Dutch fair in 2016 and participated in the inaugural edition of Tefaf New York in October. Prices for pieces on his stand start at €100,000. E.S. 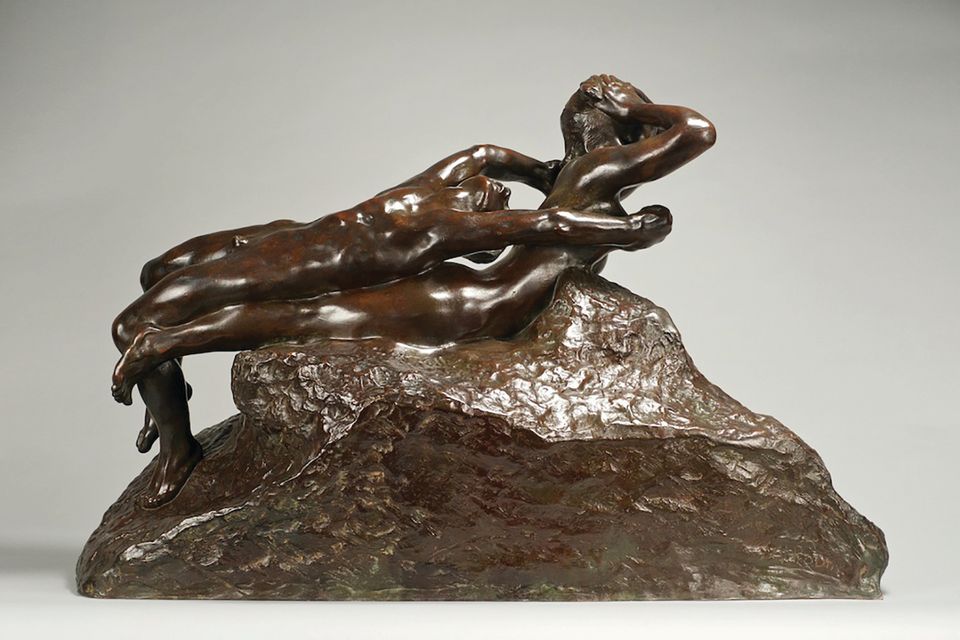 All eyes are on Auguste Rodin this year as museums across the world stage exhibitions to mark the centenary of the artist’s death. Bowman Sculpture is making the most of the anniversary by devoting space on its stand to many works by Rodin. Of the six editions of this work, this is the last one available on the market as the other five are already in museums. Rodin first conceived of this work in marble between 1894 and 1895, and four bronzes were cast during his lifetime. Two additional bronzes, including this one, were cast for the Musée Rodin by the Alexis Rudier foundry in 1944 and 1945. The figures, inspired by the doomed love story between Paolo and Francesca in Dante’s Inferno, are also featured in Rodin’s famous Gates of Hell. The piece is priced at around £750,000. E.R. 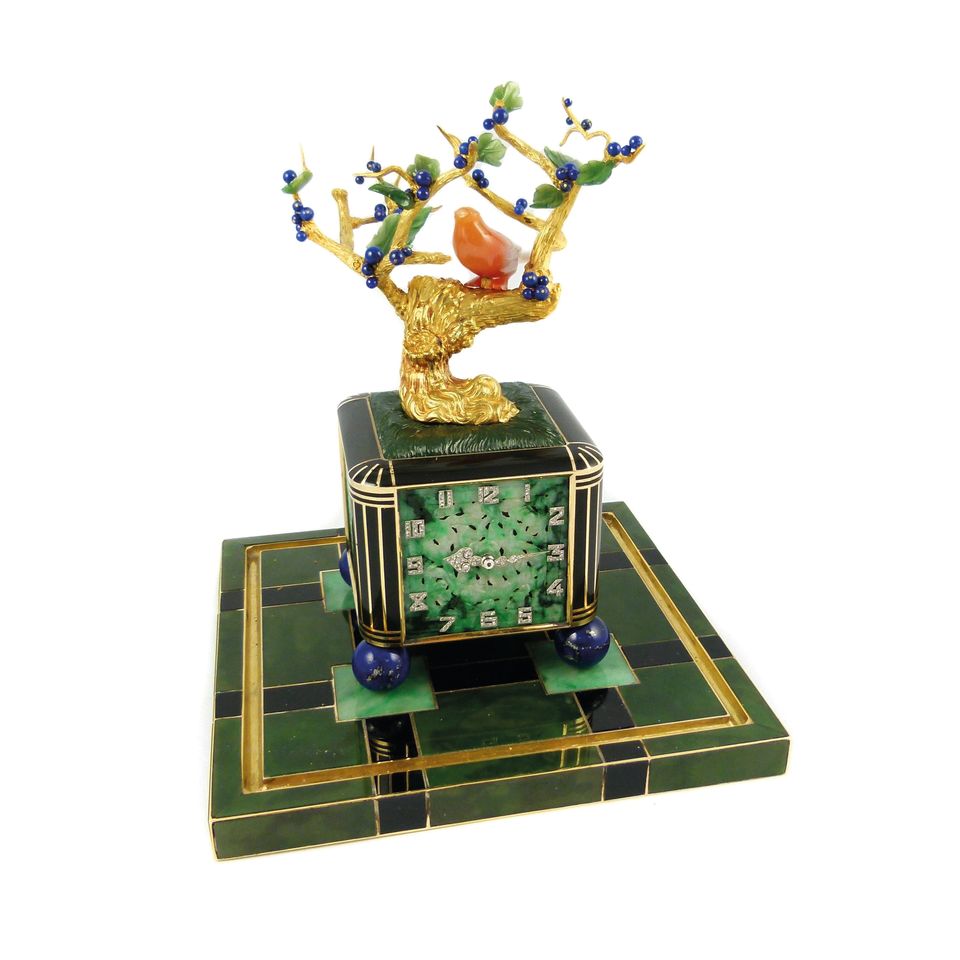 This Art Deco clock was likely a “one-off show piece”, says Nicolas Norton of the family-run antique jewellery, silver and precious objects dealership founded in 1869 by Solomon Joel Phillips. Lapis lazuli berries and nephrite leaves adorn the 18ct gold bonsai tree upon which a bird, carved from orange and white hardstone, is perched. The hands and numbers of the square clock are embellished with diamonds. The piece was designed in 1926 by the Parisian jewellery house Verger Frères and features a movement by the celebrated clockmaker Vacheron & Constantin. Known as the “jeweller to the jewellers”, Verger Frères worked with some of the most prestigious houses of the period, such as Cartier and Boucheron, and its pieces were worn by Hollywood’s biggest stars including Marlene Dietrich, Greta Gabo and Joan Crawford. “The proportions and execution of this work of art make it among the finest Art Deco jewelled clocks ever made,” Norton says. It is priced at £600,000. E.S. 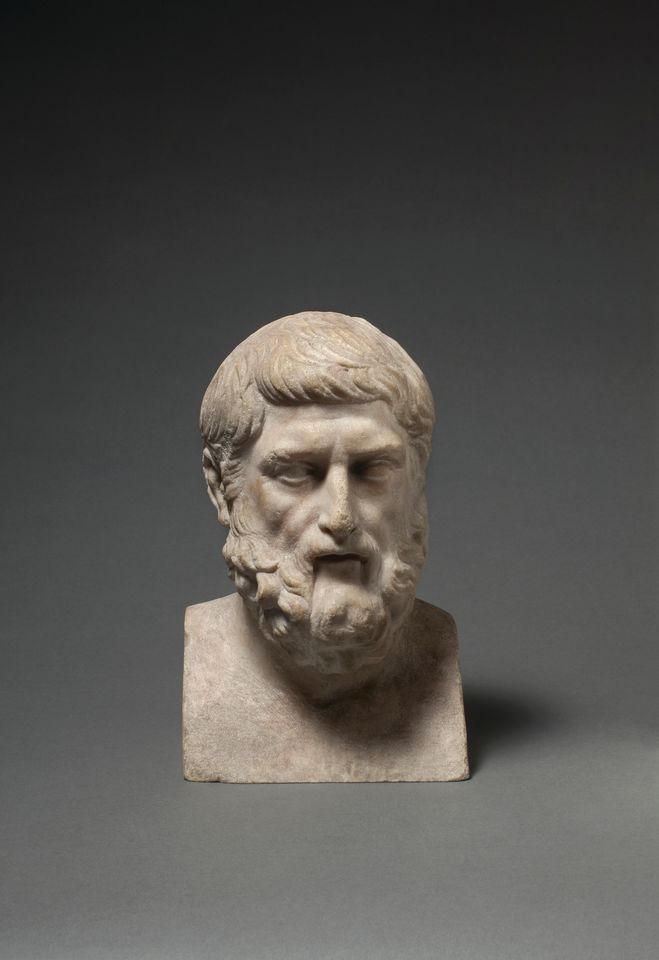 An inventory of the collection of the renowned cinquecento antiquarian Fulvio Orsini (1529-1600) described this work as a bust of the ancient Greek statesman Pittacus of Mytilene, known for famously thwarting a battle after challenging a rival general to a one-on-one fight. An expert in ancient portraiture, Orsini identified unknown portraits with the aid of his sizeable collection of epigraphical and iconographic texts. But it turns out that Orsini’s bearded politician is actually an Epicurean philosopher. A bronze copy of the work bearing the inscription “Hermarchus of Mytilene” discovered in Herculaneum confirms the identification. The gallery has priced the bust at £280,000. E.S. English side cabinet made by Collinson & Lock (around 1875)

This side cabinet was manufactured by the 19th-century London firm Collinson & Lock, which was famous for working with some of the leading artists, architects and designers of their time. “They really were at the high end of London’s manufacturers and this is an exceptional example of English art furniture,” says Martin Levy, the director of H. Blairman & Sons, “combining the finest cabinet making, for which Collinson & Lock were known, with works by a real painter, in this case Charles Fairfax Murray.” The imposing piece is still intended for a domestic setting, and is designed to stand out as a main feature on the side of a room, surrounded by paintings. The cabinet is on sale for £65,000. E.R. 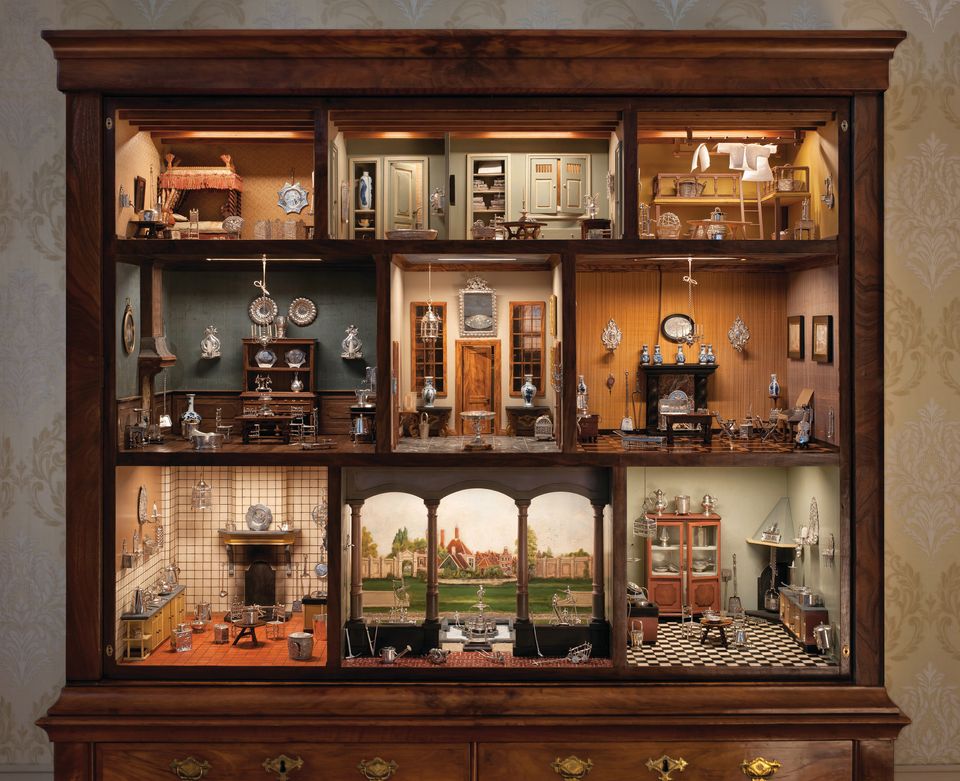 There is no question that this 300-year-old Dutch doll’s house, priced at €1.75m by the Haarlem dealer John Endlich Antiquaris, is a serious show-off piece. It certainly was designed to impress with its sumptuous wall coverings and exotic woods, as well as its collection of tiny Chinese porcelain vases and 200 perfectly formed silver miniatures of everything from bird cages to a child’s toy cannon. But this veritable feast for the eyes is no child’s toy: houses such as this were made for the wives of wealthy merchants and were akin to men’s cabinets of curiosities. Filled with goods from far-flung places sourced by Dutch traders, doll’s houses from this period could cost as much as an actual home on one of Amsterdam’s priciest streets. E.S. 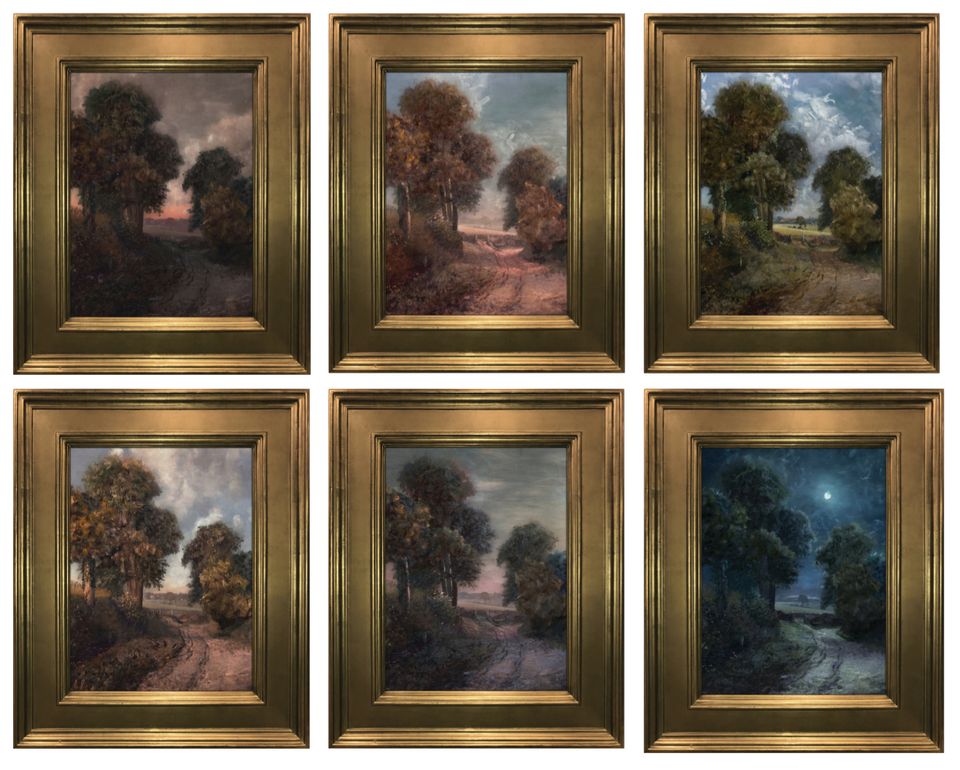 It took Rob and Nick Carter four years to complete this work—a lifetime compared with most contemporary works of art. Inspired by John Constable’s Study for the Cornfield (1817) in the collection of London’s Tate Britain, the artists have created a digitally animated landscape that is seamlessly looped every two-and-a-half hours. “I’m extremely happy to bring to Tefaf this work, which blurs the boundaries between the long tradition of British painting and the new digital landscape,” says the gallerist Ben Brown. This piece is more rewarding the longer you look at it as its colours slowly shift from dusk to dawn. It was made in response to the discovery that the average museum visitor looks at individual works for around four to six seconds. The price range for the piece is between £70,000 and £120,000. E.R.

BARGAINS ABOUND: FIVE WORKS FOR €5,000 AND UNDER €5,000: It’s not unusual for ancient artefacts to inspire contemporary artists, and this modest fourth-century BC Etruscan terracotta head comes from the private collection of the US Realist painter Philip Pearlstein. While it’s hard to see the connection between the sculpture and his work, you can imagine its sweet, smiling face being good company in the studio. “This little charmer shows the gracefulness of the Etruscan style. With its gentle smile, this head expresses the Etruscan view of serenity in this life and in eternity,” says Linda Schildkraut, a consultant for Merrin Gallery of New York. A.D.
More NewsTopicsFairs