'We must stop memorialising such a dark part of our history': official stance on Confederate monuments is shifting

Memorials honouring controversial generals continue to stir debate in many Southern states, but lawmakers are finding creative ways to deal with them 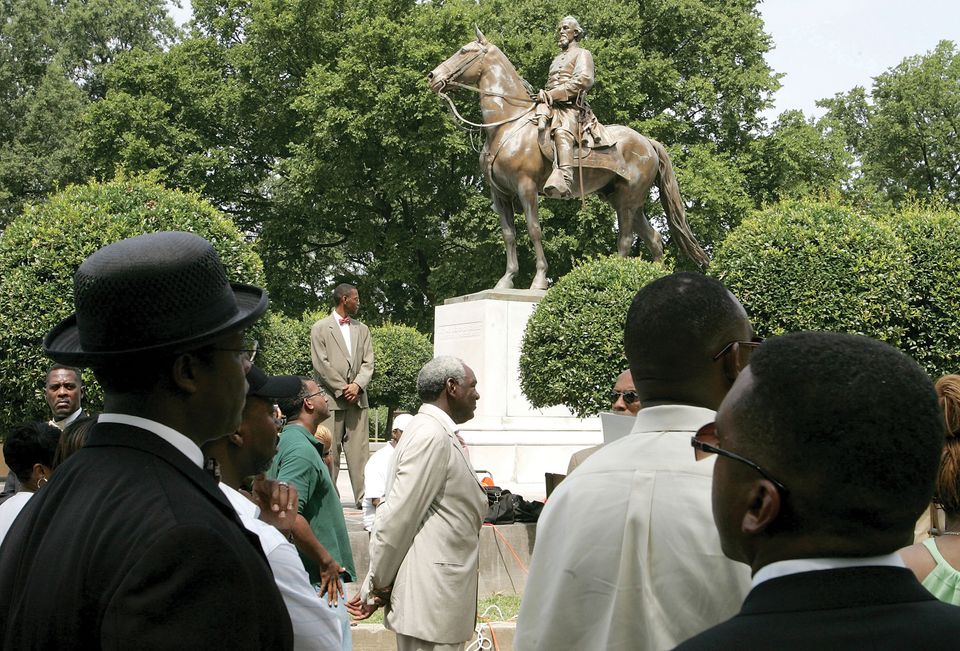 The display of Confederate monuments continues to come under scrutiny in the American South, most recently in Tennessee, where city and state lawmakers are coming up with creative ways to remove and replace memorials of controversial figures in public spaces.

Recently, the Republican state representative Jeremy Faison, who has since become chairman of the House Republican Caucus, suggested that a bronze bust of Nathan Bedford Forrest—a slave trader, Tennessee Confederate general and the first grand wizard of the Klu Klux Klan (KKK)—be removed from the State Capitol building in Nashville. He recommended instead that the sculpture, which has been on display since 1978, be placed in the State Museum’s collection and replaced with a bust of an influential woman, suggesting the country music doyenne Dolly Parton, who was born and still lives in Tennessee, or Anne Dallas Dudley, a woman’s suffrage activist from Nashville.

“If we want to preserve history, then let’s tell it the right way,” Faison said in a statement to the Tennessean newspaper. “Right now there are eight alcoves [in the Capitol]. Seven are filled with white men. How about getting a lady in there?”

In Tennessee, as in most other Southern states, it is illegal to remove Confederate memorials from public land and buildings, which is in large part why only 139 out of around 1,880 busts, statues and plaques have been taken down across the South since 1880, according to a report published in the Washington Post at the end of last year. To remove the bust of Forrest from the Capitol building—which was built in part by slave labour—requires majority votes by both the State Capitol Com­mission and the Tennessee Historical Commission. Both groups are expected to discuss the sculpture during meetings this month.

If we want to preserve history, then let’s tell it the right way Jeremy Faison, Republican Tennessee state representative

Many lawmakers and officials, including Bill Lee, the governor of Tennessee, have argued that the removal of Confederate monuments is a retrospective moral “whitewashing” of Civil War history. The Historical Commission, which was created in 2013, has so far heard two cases on the proposed removal of Confederate monuments, both of which it denied. By its nature, the commission is in favour of historic preservation, according to Susan Lloyd McClamroch, a specialist with the commission. “Memorials are a reflection of the ideals and beliefs of those who placed them at the time they were erected,” she says.

In addition to his leadership in the KKK, Forrest is best known for leading the Fort Pillow Massacre of 1864 in Henning, Tennessee, in which Confederate soldiers killed around 300 Union soldiers—a large portion of them African American—after they had surrendered. The general has been at the centre of several of the most recent Confederate memorial cases brought before Tennessee city and state lawmakers, including one which the Historical Commission denied in 2017 involving the contentious removal of an equestrian statue of the general in a Memphis park.

To circumvent the law against removing memorials from public land, in 2018 the city sold that park and another with a statue of Confederate president Jefferson Davis for $1,000 each to a non-profit organisation, Memphis Green­space, thus putting the sites in private hands and allowing the memorials to be dismantled. It was a creative but contentious move. Just before Memphis was due to celebrate its bicentennial last year, the city had $250,000 of state funding revoked after legislators decided that removing the Forrest and Davis statues “violated the intent and spirit” of the historic preservation law.

A lawsuit was also brought by the Sons of Confederate Veterans (SCV), a non-profit organisation for male descendants of Confederate veterans, against the city over the sale of the parks to Greenspace. The lawsuit was thrown out by a Davidson County judge, but the organisations struck a deal just before Christmas, with Greenspace selling the statues to the SCV. They were quietly taken down in the middle of the night and shipped to an undisclosed location “for their protection”, according to Paul Gramling Jr, SCV’s commander-in-chief. He says the statues will be re-erected on the 78-acre grounds of the organisation’s Confederate History Museum, which is due to open this May in Columbia, Tennessee, where the group is headquartered.

The official stance on Confederate monuments looks to be shifting, however, as more African American representatives are appointed to city and state governments. Faison, who is white and whose ancestor fought for the Confederacy, says his call to remove Forrest’s bust came after he was prompted to review the Confederate general’s writings by his fellow state representative G.A. Hardaway, an African American lawmaker from Memphis.

In January, state representative London Lamar, an African American woman from Memphis, introduced a bill to cancel Tenneesee’s Nathan Bedford Forrest Day on 13 July, and Governor Lee is expected to support the legislation. “I wanted to make sure that we can take tangible steps in order to stop memorialising such a very dark part of our Tennessee history,” Lamar told local TV news.