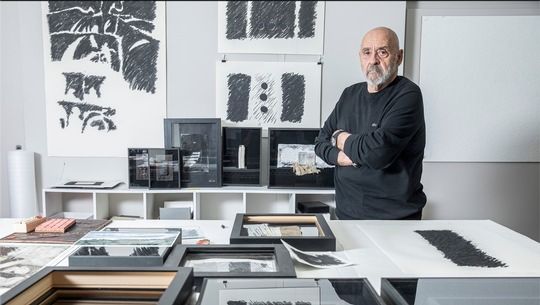 Alexander Klee, an artist and one of the founders of the Zentrum Paul Klee devoted to his grandfather in Bern, has died at the age of 80, the museum said in a statement.

Klee worked as an artist under the pseudonym Aljoscha Ségard and the Zentrum Paul Klee said it will dedicate an exhibition to him opening on 2 July. The show will focus on his contemporary work—large, calligraphic charcoal drawings and assemblages of objects from everyday life. His art, the museum said, demonstrates certain qualities that he shares with his grandfather: “a liking for the cryptic, a witty and poetic aspect, and a delight in the interplay of image and word.”

It was Alexander Klee who first suggested setting up a museum devoted to his grandfather in Bern. Together with his father Felix Klee, Alexander Klee had administered the family collection since the 1970s and he chaired the board of trustees of the Paul Klee Foundation from 1990 to 2004. In 1998, he pledged around 850 works and documents from his own collection to the museum. That year, the foundation also promised its entire collection and extensive archive material to the Zentrum Paul Klee.

The museum opened in 2005 in a building by Renzo Piano. Alexander Klee, who together with his step-mother helped organise the family archives, was a member of the board of trustees from the start.

“With his tireless dedication to his grandfather’s work Alexander Klee did a great deal to ensure that the leading centre of competence worldwide for Paul Klee’s life and work is now in Bern,” the Zentrum Paul Klee said. “We will always keep Alexander Klee’s independent spirit, his critical eye and his wise sense of humour in grateful memory.”