Hope for a new future: Beirut's art world tell us how the city might be rebuilt

As the city's arts community mourns the loss of colleagues and assesses the damage to its museums and galleries, some believe change will come from the disaster—others are less optimistic 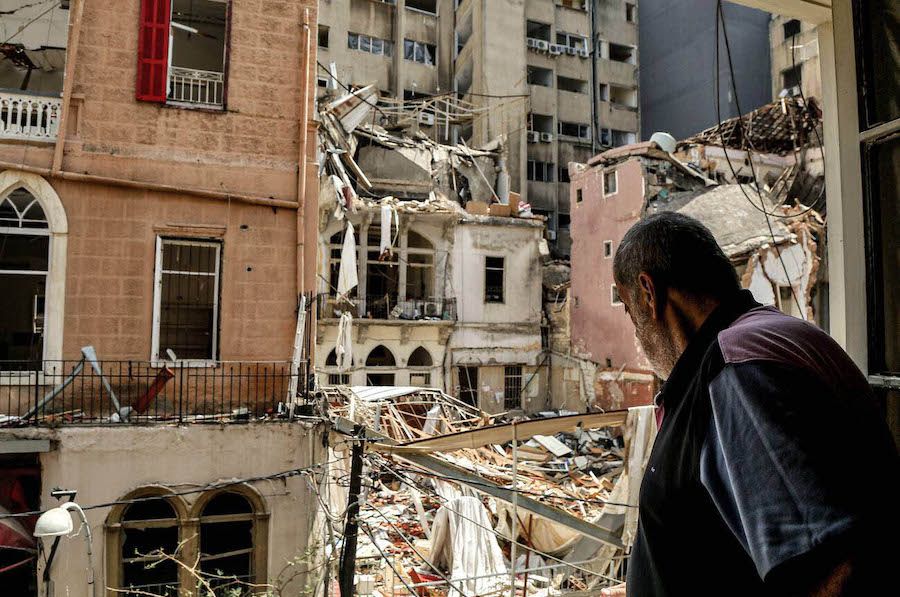 A man stares from a window towards the ruins of a heritage building in the Mar Mikhael neighbourhood, one of several historic districts in Beirut that bore the brunt of the explosion Marwan Naamani/dpa/Alamy Live News

In September 2019, to mark the tenth anniversary edition of the Beirut Art Fair, the Lebanese-Senegalese artist Hady Sy unveiled his sculpture The Wall of Hope outside the luxury Le Gray Hotel. On the former Green Line that divided East and West Beirut, the work evoked a giant iron fence with a hole bent open through it.

The devastating explosion in the port of Beirut on 4 August tore through the Le Gray Hotel and flattened the Beirut Art Fair’s home in the Seaside Arena “like an omelette”, staff said. Sy himself spent the aftermath frantically trying to find a hospital for his badly injured girlfriend. Too dazed to wonder about the sculpture’s fate as he picked through the smashed glass and equipment of his studio, he first saw it, still standing, on TV broadcasts of new demonstrations that were driven by fury over the preventable disaster.

I don’t want to think about hope. Just how can I escape my memory and these horrific images?

The port of Beirut explosion left close to 200 dead, thousands injured and more than 300,000 people homeless, but it also attacked the very heart of the cultural community of the city. The quarters most affected—Gemmayze, Mar Mikhael and Ashrafiyyeh—had previously been spared much of the full-scale destruction of the Lebanon’s long civil war between 1975 and 1990.

In the first years of this century, the Ottoman and French colonial buildings with their high-ceilinged stone houses were being slowly and lovingly restored; the winding streets in which they stood were filled with bars, restaurants, bookshops, publishers and art galleries. Many of these areas took the brunt of last month’s blast, with deaths of several well-loved figures in the gallery community and damage to 640 heritage buildings alone.

Galerie Tanit, which opened close to the port area in 2012 and is run by Naila Kettaneh Kunigk, was wrecked; the building’s architect, Jean-Marc Bonfils, was killed there with four others. As “a memorial to Jean-Marc,” Kettaneh Kunigk says, the artist Abed Al Kadiri, whose exhibition there was destroyed, has covered the walls with squares of paper filled with painted trees. “I don’t want to think about hope. Just how can I escape my memory and these horrific images?” Al Kadiri says. 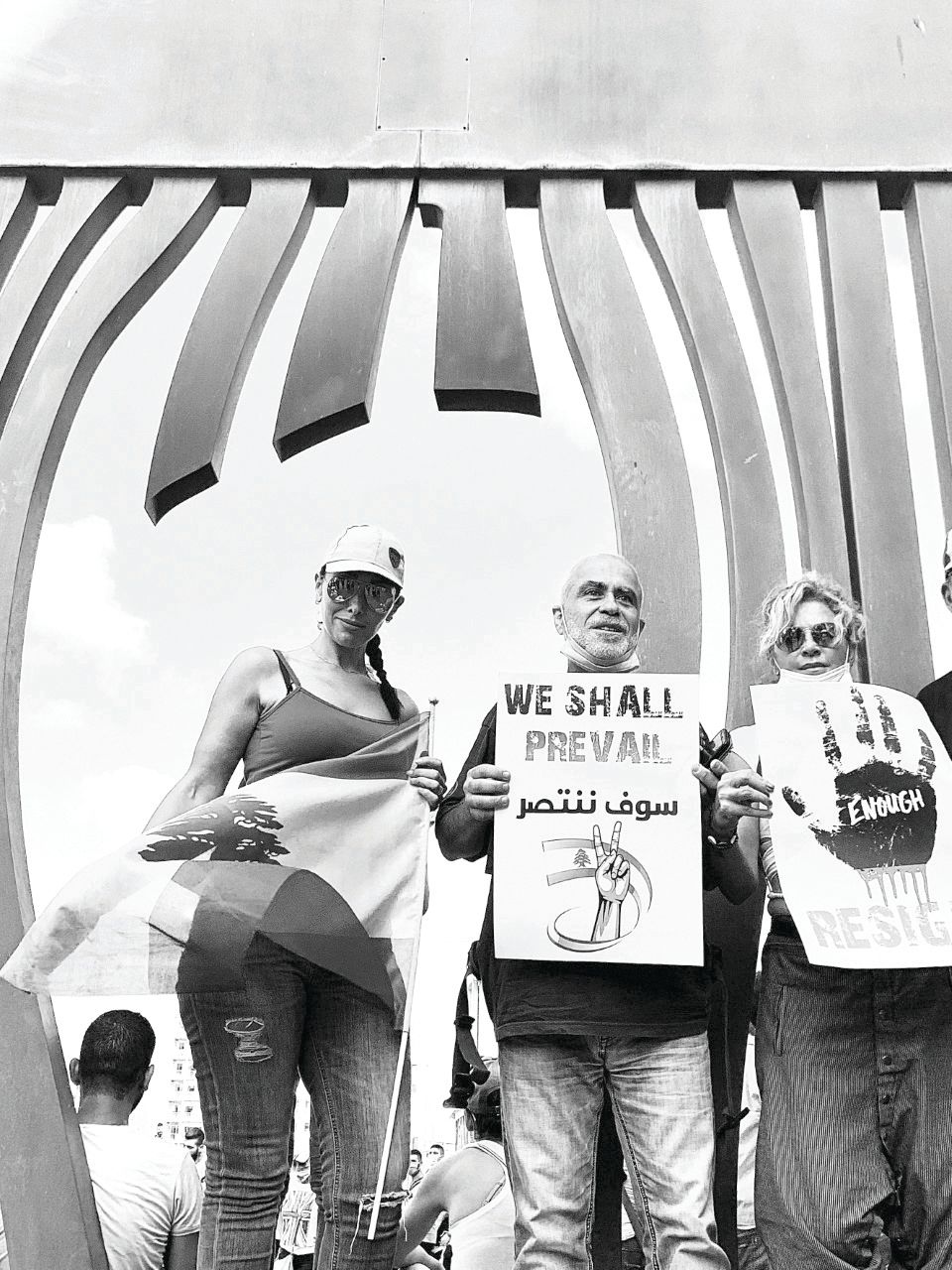 Beirut residents in front of Hady Sy’s sculpture The Wall of Hope (2019). The area in which it stands was badly damaged, but the sculpture remained intact © Hady Sy

The past decade has seen an extraordinary range of cultural activity in Beirut; a new renaissance, underlining what could now be lost. The first art fair was followed by the first Lebanese pavilion at the 2013 Venice Biennale for several years; the opening of the stunning Beirut Exhibition Center in a new development close to the port was another highlight. The MIM Mineral Museum opened in 2013, on the campus of St Joseph close to the National Museum (if you were lucky, its owner and creator Salim Edde would be there to guide you himself). Two years later, the jewel in the crown, the Sursock Museum, reopened after a seven-year restoration.

There were other initiatives in the planning in those years. The Beirut Museum of Art was due to rise opposite the National Museum to display the national collection of Lebanese art. The Beirut History Museum was to be built below Martyrs’ Square, and perhaps mercifully it was not. “It was to be all glass; this was about transparency—literally and in the metaphorical sense. The view from the rooftop would connect the whole city,” says the director of the National Museum, Anne Marie Afeiche. Now she suggests a bigger story to tell, “to reframe the discourse, reconnect with reality, to talk about destruction and reconstruction, about a place where people have been living and dying”.

What started with such hope began to be crushed as the economic crisis, culminating in the revolution that started in October 2019, brought Lebanese from all communities out on the streets. Museums and galleries stood in solidarity. All wanted the amnesia around the civil war dispelled and an end to corruption. There is shock, despair, and huge sadness for the lives lost so needlessly, but with a strong sense of motivation to clean up, to salvage, to stay strong and not be defeated. The Beirut Art Center, an experimental space on the edge of the city, is now a shelter for artists whose studios have been wrecked, and for humanitarian NGOs. But also, there is a new fear: two well-connected figures in the arts community speak of a headlong rush for the exit as those who can leave Lebanon, will. “The future doesn’t look good,” says the artist Alfred Tarazi. “Like Maurice Shehab, who hid the treasures of the National Museum, we should build concrete coffins to protect everything.”

Hady Sy—who also lived through 9/11 as an artist then working in New York—has lived in Beirut for ten years and says he will stay put. “I think about leaving every day, but since what happened on 4 August, I don’t think I could escape and leave all that horror behind. I want to stay strong and try to play a small part in the reconstruction of this beautiful city and brilliant people.”

Anne-Marie Afeiche, director of the National Museum of Beirut and director general of the General Council of Museums, Lebanon

“This time, fortunately, the damage was minimal to the National Museum of Beirut. Thank goodness it was only doors and glass [that were destroyed]; the collection is safe. On the first floor we have 70 glass showcases, which tell the history of Lebanon through its archaeology. Nine statuettes and other objects in the showcases just fell off the shelves and didn’t break. It was amazing.”

“There are hundreds of museums in Beirut. Every old house was a museum, each with its own history. Now most of them are badly damaged. It is so sad, and it will be difficult to move on. We don’t know how the city will be rebuilt. We should definitely have some guarantees that this will not happen again. However, despite all the bad news I hear every day, I feel encouraged when I see young people helping in the streets, or my friend’s daughter who wanted to gather a few thousand dollars [for the relief effort] and managed to gather a couple of million.”

“We suffered a lot of damage, an 800kg door was blown away like paper, but physical damage can be refurbished [unlike] the loss of a dear colleague who I have been nurturing like a little brother for over 20 years. Firas Dahwish [who died of injuries from falling debris] was capable of hanging a major exhibition ultra-precisely with laser beams—the best hang you can imagine—in less than 48 hours. Many times we’ve been destroyed, and we have rebuilt. But this time I don’t have this feeling of rebuilding. There is a change that should be happening in the political system because otherwise we will rebuild it and they will break it again. We have a lot of hope that this calamity will lead to a change that brings back to Beirut what it was losing: openness, diversity, plurality and multi-ethnicity.”

“One pane of glass broke, that was it; we had no damage to the works. But our communications manager suffered leg and head injuries and one of our research fellows lost his father.

I joined the clean-up crews; all of us went down, everyone who was able-bodied and wasn’t injured. It’s just sad when you see all of these gorgeous old beautiful buildings that no longer exist. You see people walking around in shock, literally. People are leaving in droves. There is not a plane that leaves Lebanon with an empty seat on it. People that I know who have never considered departing, that have stayed here through thick and thin, are saying ‘we’re leaving’.”