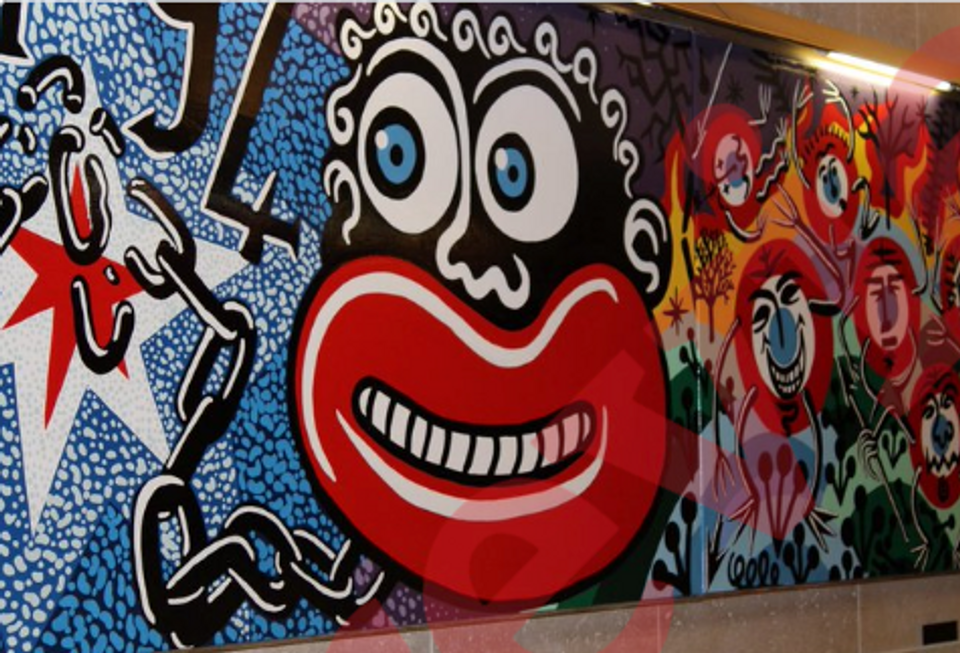 A fresco by Hervé Di Rosa in France’s National Assembly commemorating the abolition of slavery is the subject of a petition demanding its removal 28 years after it was installed. The artist has angrily branded this demand as “censorship”. Depicting two figures with black faces, bulging blue eyes, curly hair and oversized, bright red lips, the fresco is part of a series of murals by Di Rosa relating to French history. For the past few days, it has sparked a fierce debate.

The petition was launched by Mame-Fatou Niang, an associate professor of French Studies at Carnegie Mellon University Pittsburgh, and the French writer Julien Suaudeau. The idea came after Niang received a tweet from a French schoolgirl of African origin who was “embarrassed, pained and angry” after seeing the fresco during a school visit to the National Assembly. So far, the petition has received nearly 2,500 signatures on Change.org.

“This 'work of art' constitutes a humiliating and dehumanising insult to the millions of victims of slavery and to all their descendants,” Niang and Suaudeau write. “We ask the French National Assembly to take down this fresco, because its lingering presence at the heart of legislative power makes the original wrong more unacceptable every day.”

Describing the fresco as a “shameful lapse of judgment”, the authors call for it to be replaced by a work by a different visual artist, photographer, street artist or calligrapher. The pair also penned an article for the Nouvel Obs newspaper, comparing Di Rosa's image to Tintin in the Congo by the Belgian cartoonist, Hergé. They write: “One has the feeling of opening one of those infamous spell books on white supremacy.”

Di Rosa's work draws on Pop art and bande dessinée (comics) and he describes some of his paintings as theatrical and grotesque. In 1979, heco-founded the Figuration Libre (Free Figuration) movement with fellow French artist Ben. Then in 2000 he founded the Musée International des Arts Modestes (MIAM) in Sète, south of France, to exhibit international artists and question the borders of contemporary art. MIAM is currently showing an exhibition, 'Kinshasa Chronique', featuring 70 artists from the capital of the Democratic Republic of Congo.

“These two people allow themselves to accuse me of racism [and] have the nerve to act as spokespeople for the millions of victims [of slavery] and want to censor the work,” Di Rosa tells The Art Newspaper. “These defamatory censors are obviously totally ignorant of my work over the past 40 years and even art history over the past 2,000 years. How can attacking a painting that celebrates the abolition of slavery help to fight racism? I think that these people, far from fighting true and unacceptable discrimination against some of our compatriots, are prospering from racism. This work has been hanging in the National Assembly for 30 years and has never been the object of a complaint. Does this mean that French MPs are all racist?”