'It's not about shock value': Russian artist skins, eats and performs sex acts on dead animals in the name of art 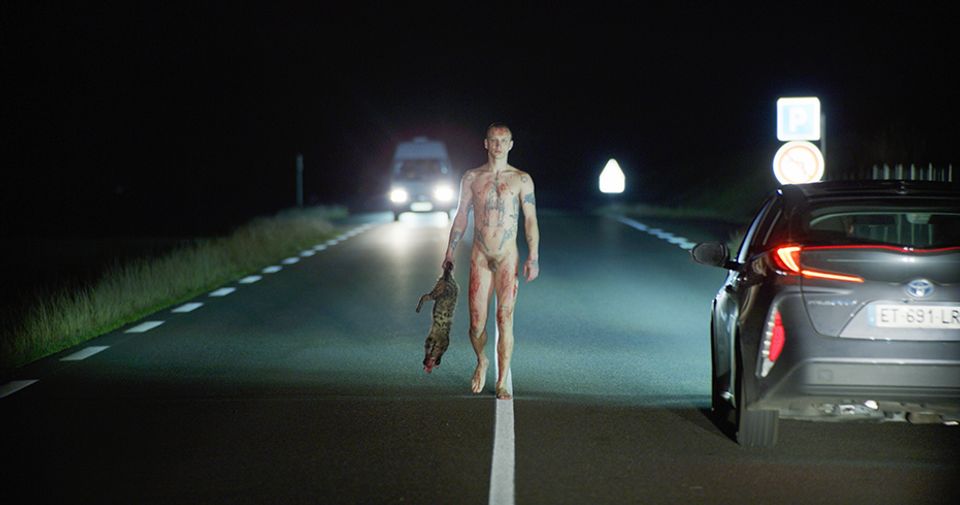 Courtesy of the artist and a/political

Petr Davydtchenko stands on a balcony overlooking the Umbrian countryside and deftly skins and dismembers a dead cat. He is in Italy for the opening of his solo exhibition Millennium Worm at the Palazzo Lucarini Contemporary in Trevi.

For the past three years, the Russian artist has been living exclusively off roadkill in an attempt to pursue a “semi-autonomous and non-governed way of life”.

Davydtchenko presents his gruesome art practice mainly through video installations. One film shows an owl lying on the side of a road unable to move, another features Davydtchenko picking up a dead rat off the ground and devouring it raw. 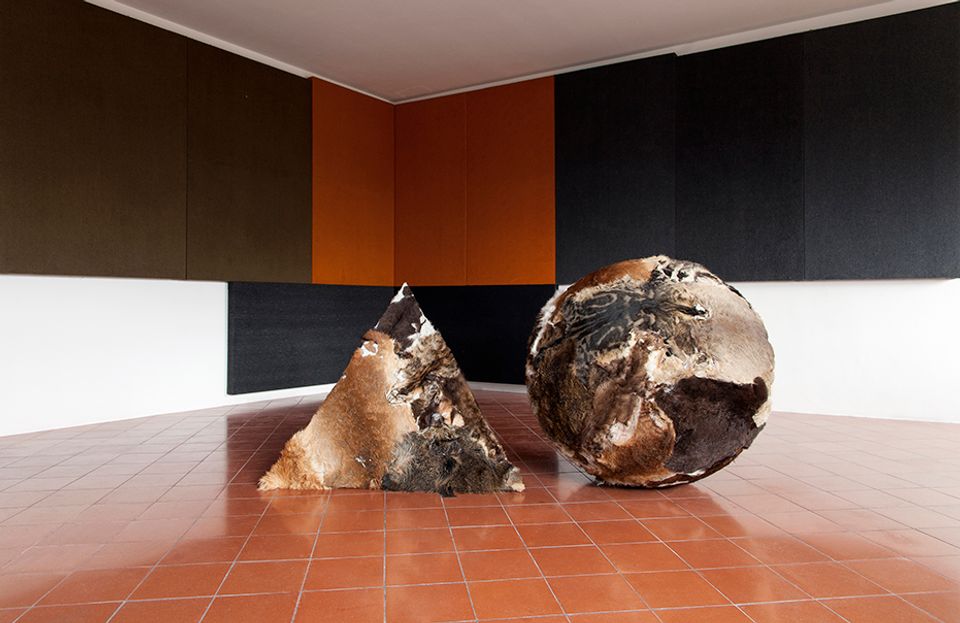 Animal hides are also on show in his exhibition, stretched over geometric sculptures or laid out on the floor. Alongside these is a stack of boxes, meant to represent the archive that Davydtchenko keeps at The Foundry in Maubourget, France—an artists’ residence run by the art organisation a/political, and where Dyavydtchenko has been living since 2016.

In his archive Davydtchenko preserves and stores animal parts in freezers, some of which he later thaws and eats. He also keeps a digital archive of the time, condition and GPS locations of his roadside findings, along with texts such as cooking recipes and preparation techniques. These recordings, he says, function as a diary which charts his transformation over the three years since he began living “parallel to modernity”. 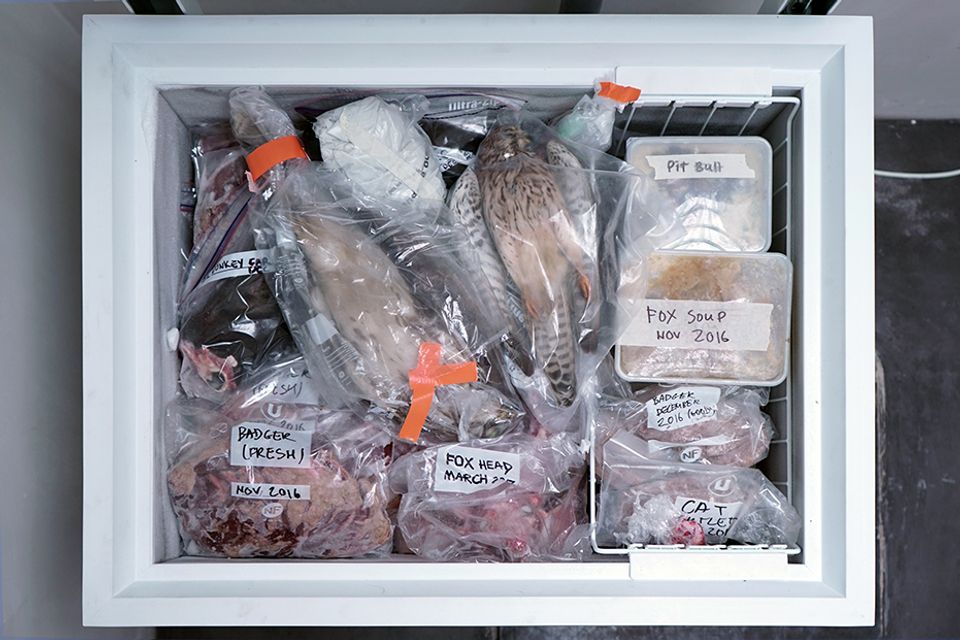 "I just wanted to show that it was possible to exist alternatively, and to show that there are other options", Davydtchenko says. His work grew out of an interest in cryptocurrencies, which he saw as an alternative to mainstream economic systems.

Davydtchenko says that he does not live entirely “off-the-grid”, and uses modern technology to document his journey and importantly, relies on the destruction created by modern machinery to produce the roadkill that he feeds on.

Becky Haghpanah-Sherwin, the director of a/political, says the project was not necessarily created with the intention of being shown as an exhibition. "The Foundry", she says, “is a place of experimentation away from the art market that Petr used as a space to transition into a way of life. Nevertheless, it is often visited by people in the art world, who take interest in Petr’s work”.

Davydtchenko says his work is not performance art. “This is how I live, I eat cats where I live, now having been invited to Italy, I eat cats here. This is my way of existing.” 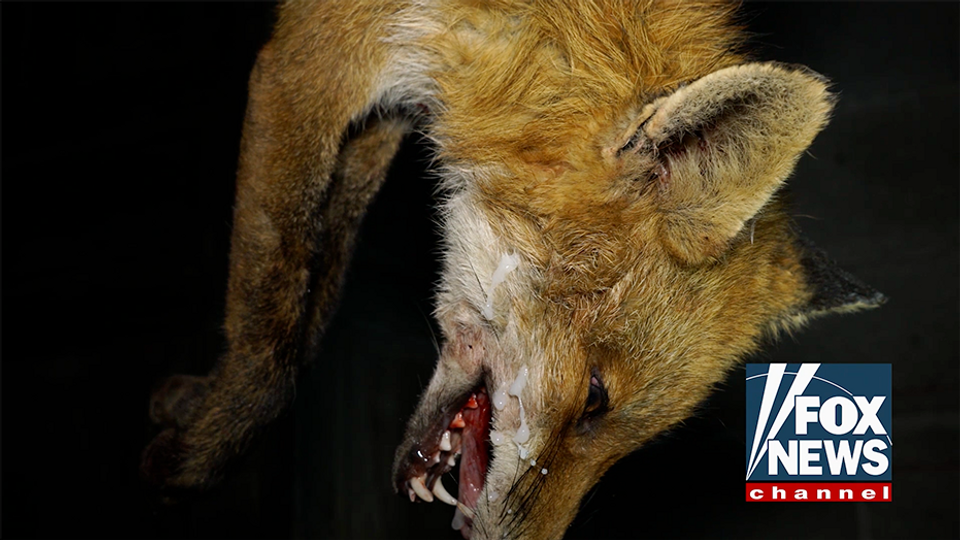 Courtesy of the artist and a/political

Not all the roadkill Davydtchenko finds is used to sustain his life, however. One six-minute video in the exhibition contains footage of the artist repeatedly inserting his penis into a dead fox’s mouth, in the corner of the frame is the Fox News logo.

The exhibition’s curator Maurizio Coccia says he is not "interested in shock value”, nor is Davydtchenko. The use of each animal has a symbolic meaning, he says, and Davytchenko’s actions in this video “relate to capitalism and media censorship, to the deepest and darkest roots of the human species”.

At the exhibition opening, Davydtchenko offered visitors a taste of a porcupine that he has slow-cooked, and whose hide and quills are displayed in one of the Palazzo Lucarini's rooms. He hopes his next project will be a pop-up restaurant serving roadkill to the public.

The greatest challenge of his practice is not the isolation of this “parallel world”—he prefers existing somewhat separated from society—but readjusting into the “big world” for events like this exhibition opening, Davydtchenko says.

Opening a restaurant will naturally mean inviting crowds of people back into his life, but Petr wants to stay hidden in the kitchen, focusing on his goal of achieving “three Michelin stars for cooking donkey penis”.