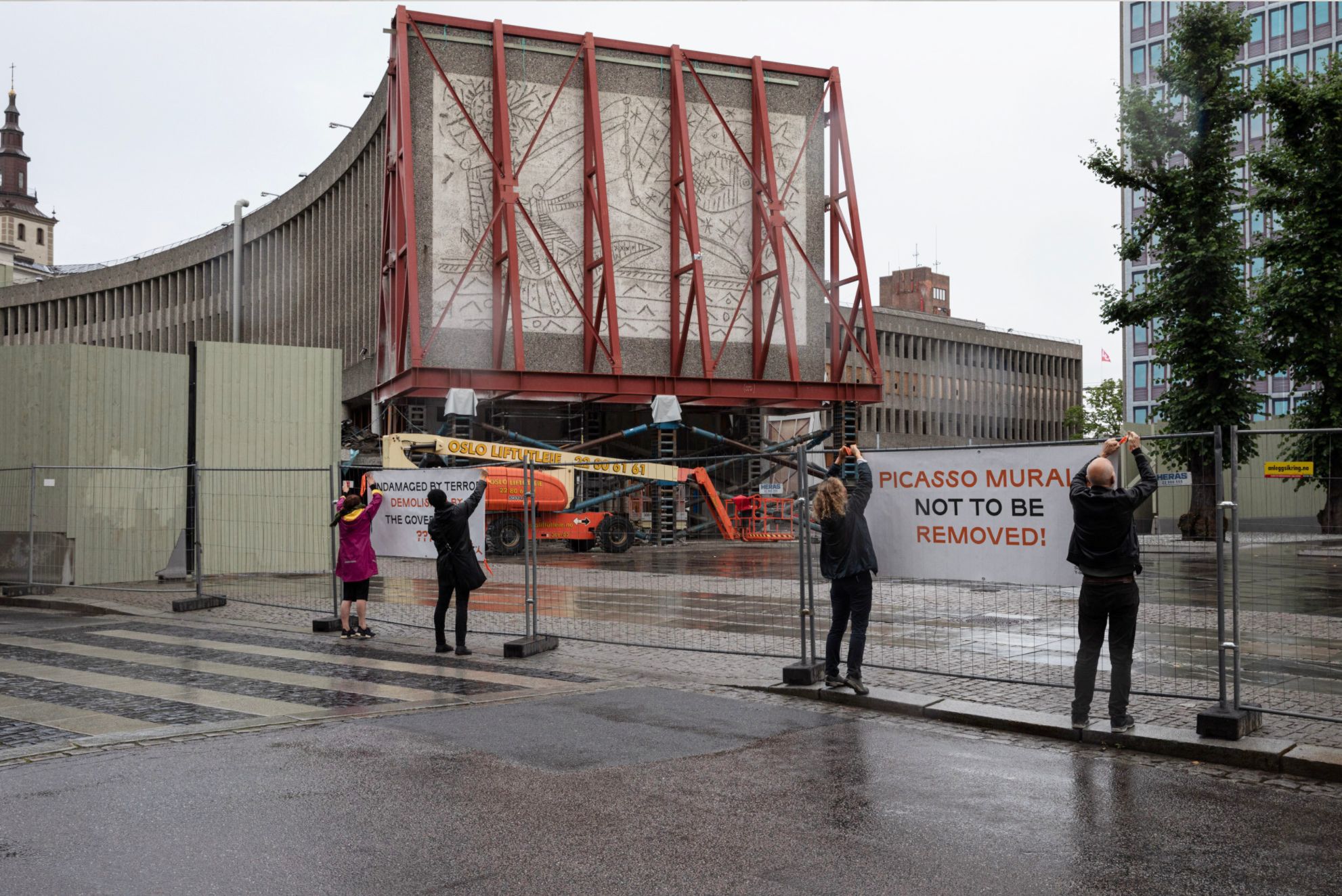 Protesters hanging up posters outside the demolition site for the Y Block building on 28 July Photo: © Adrian Bugge

The legal battle over the Picasso-Nesjar murals removed by the Norwegian government from the Y Block administrative building in Oslo earlier this week is escalating. The Fishermen hung on the brutalist façade while The Seagull was located in the lobby of the building, which was designed by the Norwegian architect Erling Viksjø in 1969.

The murals were drawn by Pablo Picasso and sandblasted on to the walls of the Y Block in collaboration with the Norwegian artist Carl Nesjar. The building, located in the capital’s Regjeringskvartalet area, is due to be demolished under government plans after a car bomb rocked the district in a terrorist attack in 2011.

Plans to demolish the block were first proposed by the government in 2014; the Picasso-Nesjar murals are to be incorporated into two new buildings to be built in the government district. “Viksjø’s grandson and I have filed a lawsuit [to the Norwegian government] against the planned re-location,” says Gro Nesjar, Carl Nesjar’s daughter.

In March, the Statsbygg, the agency responsible for the Norwegian government’s property assets, was given the “assignment to start preparation work for the demolition of the Y Block”, according to the Architect’s Newspaper.

Earlier this month, Gro Nesjar talked to The Art Newspaper about her father’s 17-year collaboration with Picasso and why the murals’ preservation is such an urgent issue. She explained that “under Norwegian law, the Y Block murals are considered a co-authored art work by Picasso and my father and the architect Viksjø [so] we do have what are called ‘moral rights’, as long as we can prove that the murals are a collaboration—that my father was not just a fabricator for Picasso but part of the artistic process.” She claims also that the building was not seriously damaged by the terrorist attack in 2011. “The fact is only a couple of windows were broken!” Nesjar says.

Local resident Tone Dalen, who has been protesting on site, tells The Art Newspaper that The Seagull was transported out of the building on 28 July and is now outside.  “They will start to take down The Fishermen today [29 July]. It has already been cut away from the Y Block, now it will be lowered to the ground. It will apparently be transported away from the building on Thursday," she says.

“Both works will be stored in a box for up to ten years until the new buildings are finished. They will be mounted in [the] new building, but in a very poor manner, that totally disrespects the intention of the works, as they were created in unity with the Y Block. As both works were created specifically for the Y Block, putting them in another building makes no sense really.”

Art professionals worldwide have spoken out against the impending destruction of the Brutalist structure. Earlier this year curators at the Museum of Modern Art in New York—identified as Martino Stierli, the chief curator of architecture and design, and Ann Temkin, the chief curator of painting and sculpture—asked Norwegian politicians to “reconsider the approved decision for the demolition”. In May, Jean-Louis Andral, the director of the Musée Picasso in Antibes, wrote to the Norwegian prime minister Erna Solberg expressing his “grave concern” over the government's plans.

In a letter to the Musée Picasso, dated 10 June, the Norwegian minister Nikolai Astrup says that the “demolition of the Y Block provides an opportunity to establish a more open government building complex and improve the outdoor spaces considerably in an area that did not previously function optimally”. Astrup says that Statsbygg has consulted the governmental organisation Public Art Norway (Koro) about how The Fishermen and The Seagull can be integrated into the rebuilt government building complex.

“The government has adopted the experts’ recommendation that The Seagull be placed in the public entrance to Building A and that The Fishermen be placed in Building A above the VIP entrance facing Einar Gerhardsens plass. The Picasso Administration [which oversees the painter's legacy] has approved the new location. Both works of art will be positioned in such a way that they can be seen by the public. This means that The Seagull will actually be more accessible in the new government building complex than is currently the case,” Astrup adds.

The Picasso Administration had not responded to a request for comment at the time of writing.