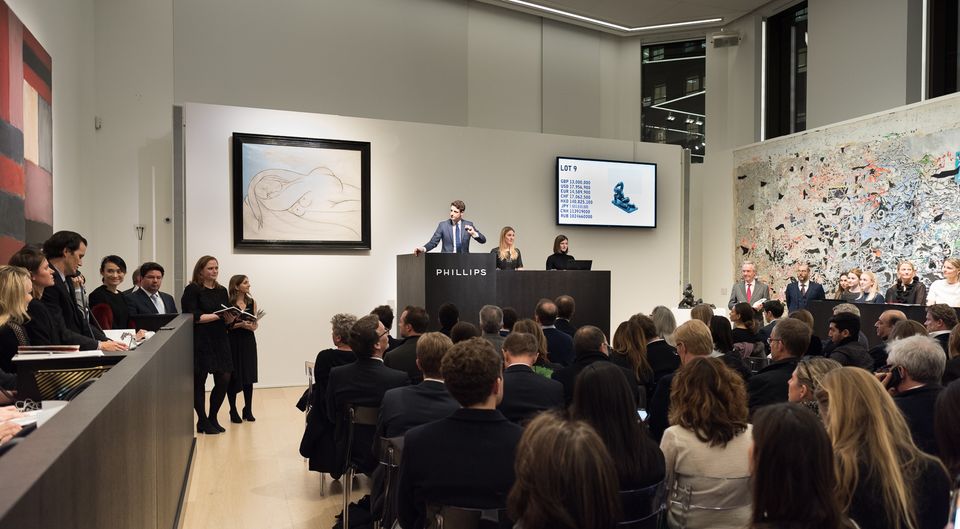 The stars were aligned for Phillips in London last night when La Dormeuse, Picasso’s imposing 1932 painting of his voluptuous lover and muse Marie-Thérèse Walter, sold for £37m (£41.8m with fees).

The portrait–part painting, part drawing–contributed to what the auction house said was its highest ever total anywhere–including New York. The £84.5m (£97.8m with fees) result is seven times last spring’s total. The sell-through rate was a strong 92%.

Tate Modern’s exhibition dedicated to Picasso’s works from 1932 (until 9 September), coupled with an “incredibly attractive” estimate of £12m to £18m and a robust market for 20th-century works “created the perfect storm”, said the London and New York dealer Brett Gorvy, who bid, unsuccessfully, on the painting on behalf of a “very disappointed” client.

“Selling the Picasso in London worked in Phillips’s favour. Bidding might not have been so deep in New York where it would have been up against other higher value lots,” Gorvy said after the sale.

At least five people vied for the painting, which eventually went to an anonymous telephone bidder on the line with Marianne Hoet, Phillips’s deputy chairman in Europe. Hugues Joffres, a senior adviser at the auction house who snared the painting, described the buyer as “seasoned and sophisticated”, to which chief executive Ed Dolman cheerfully added “and rich”.

In Picasso’s collection until he died, La Dormeuse has never come to auction before. The family of the European seller acquired it from the now defunct Pace-Wildenstein Gallery in New York in June 1995 and it has been tucked away in their private collection ever since.

According to Jean-Paul Engelen, Phillips’s co-head of 20th-century and contemporary art, the Tate had originally asked for the painting to be included in their exhibition, Picasso 1932–Love, Fame, Tragedy, an offer apparently declined by the seller. Painted on 13 March 1932, La Dormeuse would have sat perfectly in the show, which has canvases from 12 and 14 March 1932.

A further indication of Phillips’s ability to capture more of the 20th-century market came with the sale of a reclining nude bronze by Henri Matisse, conceived in 1907, cast in 1908 and last exhibited in 1917. The sculpture made £13m (£14.9m with fees)–double its estimate.

At the other end of the timeline, John McEnroe’s painting by Mark Bradford, created in 2007 and inspired by the serial killer Charles Manson, made a record for the Los Angeles artist. Helter Skelter I, which the tennis champion bought the year it was painted, fetched £7.5m (£8.7m with fees).

The monumental mixed media collage was guaranteed by a third party for $10m, according to Gorvy. “No one made much money on it apart from McEnroe,” he said.

It was more a case of slow and steady wins the race than all-out fireworks at Christie’s and Sotheby’s earlier in the week, although that did not stop records tumbling.

Four lots went over £10m, topped by a series of six memento mori portraits of Andy Warhol created for a show at Anthony d’Offay in London just months before the arist died in 1987. The group of canvases, which was guaranteed by the auction house, last sold at auction in 2014 for $30m with fees; it made marginally more this week: £19.9m (£22.6m or $31.3m with fees).

Other US headlines came courtesy of Jean-Michel Basquiat, whose 1982 crossbar canvas, which was guaranteed by a third party, sold over the phone to Americas co-chairman Alex Rotter for £10.5m (£12.1m with fees), and Donald Judd, whose aluminium wall sculpture from 1985 doubled its estimate selling for £1.1m (£1.3 with fees) to the London and New York dealer Nick Maclean, who was converting prices into US dollars for a client on the phone.

The only real glitch came when Adrian Ghenie’s Study for The Kaiser Wilhelm Institute (2011) went unsold, only to be re-offered around 20 lots later–a first for the auction house, according to Christie’s global president Jussi Plykkänen, who said the successful bidder had not been able to connect first time round. The canvas went on to sell for the low estimate of £400,000 (£488,750).

Bidding was international, Christie’s said, although it felt as if there was less of an Asian presence, both in the room and on the phones, than at previous sales.

Twenty-one lots–accounting for more than half of the value of the sale–were backed by financial guarantees, with 11 third-party guarantees being announced at the last minute. “Buyers are becoming more discerning and, despite the stability in the market, sellers want the assurance of a guarantee,” said the London-based art adviser Nazy Vessegh.

The top lot was Peter Doig’s The Architect’s Home in the Ravine (1991), which was subject to a late third-party guarantee. Last sold at Christie’s just two years ago for £11.3m (with fees), the painting sold with a single bid for £13.2m (£14.4m with fees)

The results across the auction houses this week indicate the market is in full recovery after slumping between 2014 and 2016. “The market is solidifying rather than moving, and that’s not a bad thing. The bubble is not bursting, it remains intact,” Vessegh said.

“We mustn’t forget that the totals this week are the highest achieved in Europe and we now have Phillips entering the big league, which is new.”