The Polish artist Pawel Althamer, who has specialised in building community sculptures, has completed the first commission for a new sculpture park in Sylhet, the city that is a spiritual and cultural centre for Bangladesh. It is a giant figure of a woman, large enough to walk through the limbs, built with bright textiles over a bamboo frame by a volunteer team that included four of Althamer’s neighbours from Poland and around 100 villagers and children as well as patients of a local drug rehabilitation centre.

Srihatta, the Samdani Art Centre and Sculpture Park, is in a rural area in the tea estate district of Bangladesh, 30 minutes from Sylhet International Airport. It is a first for the city, a popular tourist destination where Muslim burial sites also draw religious devotees.

The sculpture of a reclining woman, clothed in bright scarves, was named Rokeya, after Begum Rokeya Sakhawat Hossain (1880-1932), a Bengali writer and social activist, who campaigned for women’s rights and education in Bangladesh. 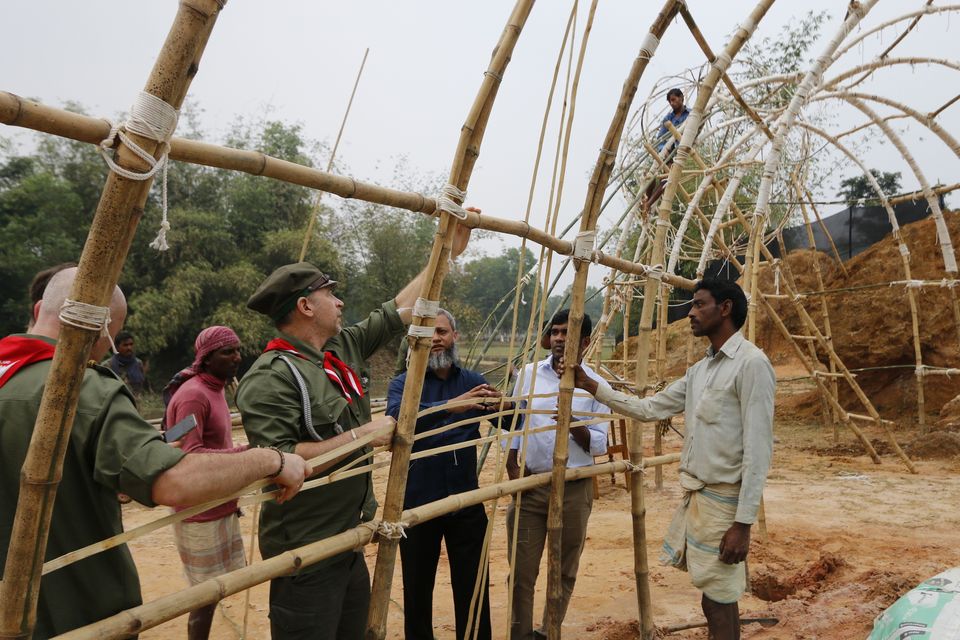 Althamer says his dream was “to use the concept of park and sculpture to inspire local people”.  The sculpture was covered in fabrics stitched by local women, helped by curious children, and will last “as long as possible” in an area that gets heavy rains, he says.

“The local Imam was asking what the group of visitors was preparing, if we were making a temple, why we are building such a strange looking sculpture,” he says. “We explained we were a group of Polish artists there to build a place for integration, for local children’s society, a cultural place and a place for art, rather than a temple.”

Althamer and his group were in Bangladesh for the eight-day workshop after an earlier visit, with the project in collaboration with MoMA Warsaw and the Brodno Sculpture park that he launched in Poland. It is the first commission for the Bangladesh park, several thousand square metres in size in an area with a curious mix of farms, and stone and gravel industries, he says.

“This art of sculpture is not just for visitors, but for locals to be confronted with ideas very far from their style of life but very inspiring for them.  It’s something extraordinary, full of energy.”

The park will open to the public in 2018, after several other site-specific projects by artists Asim Waqif, Ayesha Sultana, Rana Begum, and Mithu Sen, with others to be announced.

Diana Campbell Betancourt, the artistic director of the Samdani Art Foundation, says: “We are first and foremost trying to reach the local community—people who never would have been to an art museum before and engage them with art as an educational tool.” Residencies for national and international artists, curators, and arts professionals will follow, she says.