From a West Coast edition of an exhibition you can view from your car to ephemeral installations across the LA basin, the city’s arts community has found ways to reconnect 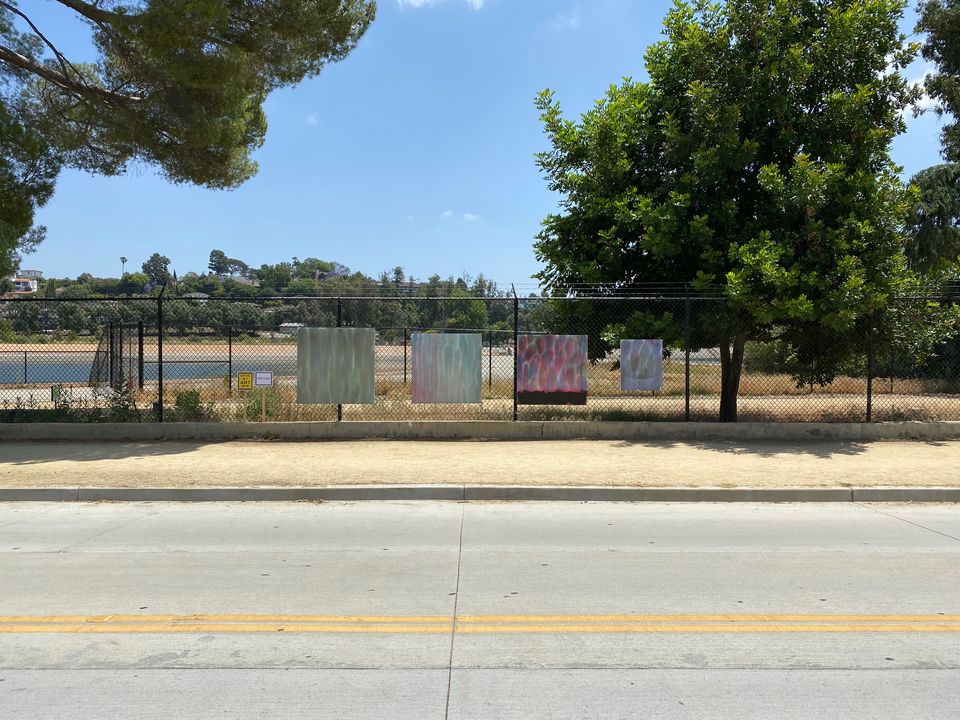 Over the past three months, as they have remained closed to the public for safety, US galleries and arts institutions have struggled with how to connect with their audiences during a global pandemic, turning to online exhibitions and streaming events. And even as parts of the country start to reopen, art spaces are grappling with how to safely welcome back the public. In Los Angeles, several projects have popped up that prioritise real-life art experience—even if that might be mitigated by social distancing or viewed through a car widow.

Over the course of two weekends in May, dozens of artists all over Los Angeles exhibited work outside their homes or in other public spaces for Drive-By-Art. The project was organised by the artist Warren Neidich, who saw the detrimental effect that the pandemic was having on the art community. “Artists depend on exhibitions, otherwise they’re isolated,” Neidich says. The West Coast edition was preceded by one in early May on the South Fork of Long Island in New York. Given the success of the East Coast version, Neidich enlisted the help of three Angeleno art-world figures—artist Renee Petropoulos, and curator/writers Michael Slenske and Anuradha Vikram—to help mount the project in LA.

On the project’s first weekend, from May 23-25, drivers criss-crossed neighborhoods east of Western Avenue, from Koreatown to Highland Park to Pasadena, following an online map that located works of art in front yards or on street corners. These included abstract works by Chet Glaze and John Knuth hung on the chain link fence of the Silver Lake Reservoir, an augmented reality drawing by Nancy Baker Cahill that viewers could experience via an app on their phone, and Kori Newkirk’s Fith — an interruption, ribbons of black mylar suspended between two buildings in a downtown LA alley, fluttering in the breeze. A few pieces were on view at night, like Jennifer West’s film about the recently demolished 6th Street Bridge projected onto a screen above her Echo Park studio. Artist Yrneh Gabon directly addressed police violence in his sidewalk performance, which ended with him sprawled out on the concrete, sputtering “I Can’t Breathe!”

For Neidich, the physical connection between artist, artwork, and viewer, even from within the bubble of the car, is a key part of the project. “It’s very important to bring the body back into the picture, to reactivate the body,” he says.

The second weekend, focused on the area west of Western, saw some artists postponing their installations in response to the protests that had swept LA in the wake of George Floyd’s killing by a Minneapolis police officer. Artist Yrneh Gabon directly addressed police violence in his sidewalk performance, which ended with him sprawled out on the concrete, sputtering “I Can’t Breathe!” 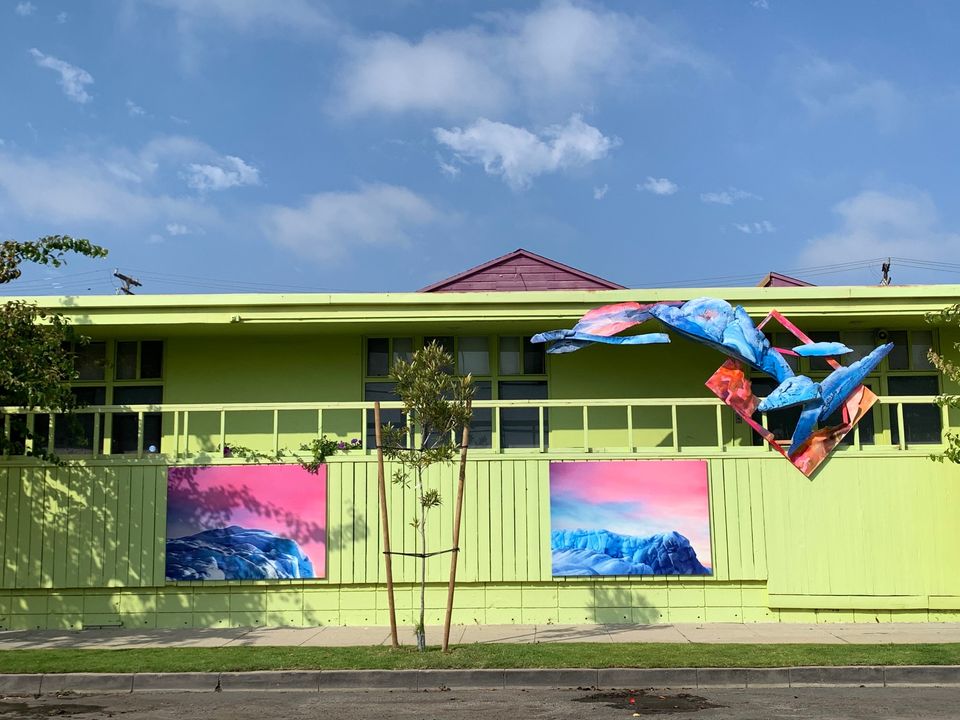 Luciana Abait, Peaks (2020), and Yvette Gellis, Sacred Spaces (2020), installed on the Lime Green Building in LA Courtesy of the artists

A concurrent project that views the entire LA basin as one big gallery is We Are Here / Here We Are, mounted by artist collective Durden & Ray. Spearheaded by D&R member Sean Noyce, the exhibition features over 100 artists, and takes a scrappier, less polished approach than Drive-By-Art. “Why not take it to the streets and the sprawl? Why not let it be ephemeral?” asks Noyce. “We encouraged folks to engage in the neighbourhood, to contribute work that was not too terribly precious, because if it came to it, stuff might be stolen.” As opposed to two discrete weekends, the exhibition is on view until 20 June, making it hard to secure every work in a public space. Olga Lah’s installation of lawn flags resembling a field of California poppies disappeared from a Long Beach park after a couple of weeks, while Helen Chung’s tacked up drawing in West Hollywood went missing, only to be returned later by someone who had been interested in buying the work.

“The response has been touching. Some people have said,‘Thank you for providing the show, it’s given me something to look forward to again,’” Noyce recounts. He says it has also opened up new ways of thinking about sharing artwork. “It really shows you don’t need these structures to show art. We’ll see things loosening up, barriers dissolving,” he says. “That’s the hope anyway.”

Meanwhile the Parker Gallery, located in a stately residence in Los Feliz, decided to use their ample front yard to exhibit work safely. They opened a three part show, Sculpture from a Distance, with the final part open now through 13 June. The gallery founder Sam Parker says the response, both from the artists he invited to participate as well as the public, has been enthusiastic. “People didn’t realise how desperate they were to see something in person until they were here,” he says. The exhibition has also given some artists the chance to show work that was originally intended for an outdoor space, but had only ever been seen in a fair or indoor gallery setting. This is the case with Evan Holloway’s large pyramid of ten rubber chickens cast in bronze. To the artist’s delight, the work has acquired a patina of pigeon excrement, Parker notes. 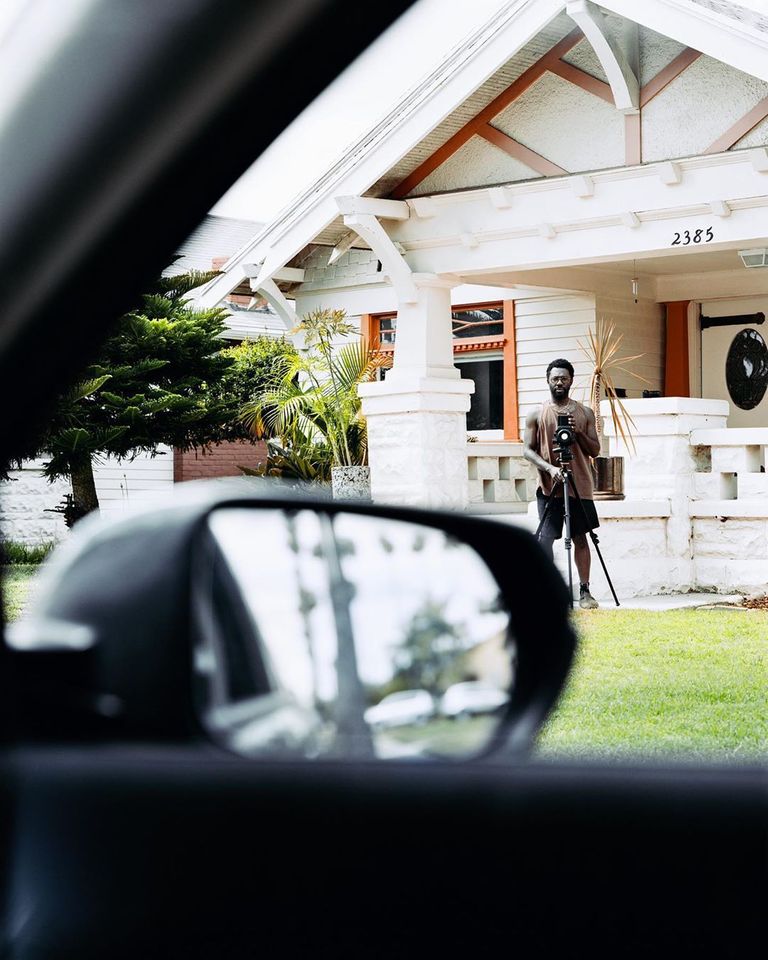 Photographer Ian Byers-Gamber saw in the pandemic an opportunity to reconnect with people through socially-distanced portraits. “My first impulse was maybe I should photograph the empty streets, but I didn’t want to make disaster porn,” he explains. “I realised the biggest thing was that I missed my friends. I landed on the idea that I could drive and yell at people through my car window. The car is this safe space. You’re invincible.” Since beginning the series, Byers-Gamber has shot over 120 portraits of friends and other members of the LA art community standing on their porches or in their front yards, all from the safety of his car. In every one, the edges of the car window frames the image. Since beginning with friends, he’s branched out into acquaintances and others who he’s admired but been too nervous to approach until now.

This importance of the social function of art—how it connects people in real space—has been made all the more apparent by its absence. Drive-By-Art creator Neidich stresses this crucial role as well. “Art is a means of social integration, a way of producing solidarity and community,” he says. “When you don’t have that, people are at a loss.”