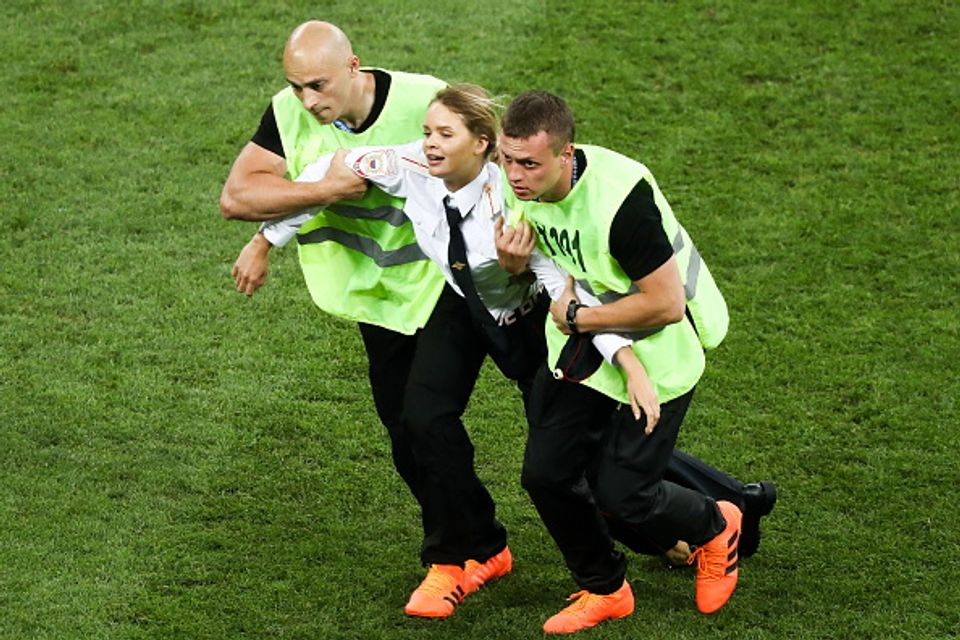 Four members of the Russian activist group Pussy Riot have been charged with “violating spectators’ rights” and illegally wearing police symbols after they invaded the pitch during the World Cup final match between France and Croatia at Luzhniki stadium in Moscow yesterday (15 July).

Three women, one of them identified as Olga Kurachyova, and one man ran on to the pitch dressed in police uniforms as President Vladimir Putin watched on. In a statement, the group said the performance, titled Policeman enters the Game, marked 11 years since the death of the dissident Russian poet and conceptual artist, Dmitri Prigov.

The statement continued: “The World Cup has reminded us of the possibility of a heavenly policeman in a wonderful Russia of the future. But the earthly policeman, who intervenes in the game every day and knows no rules, is destroying our world.”

The group said the pitch invasion was a protest and issued a list of demands to the Russian government, including the release of all political prisoners, an end to arrests at political rallies and to the fabrication of criminal cases.

In an updated statement, Pussy Riot say the four members were detained overnight in a Moscow police station where there are “no conditions to sleep, eat, take a shower etc”. They say the group is due to be brought before a court today but officials have not provided them “with information about where and when this process will take place”.

Furthermore, the detained activists have not been able to speak with their lawyer, Nikolay Vasilyev. “It's against the law, everybody has a right to talk to a lawyer,” the statement says. According to the group, government officials are considering whether to bring a criminal case against the protesters.