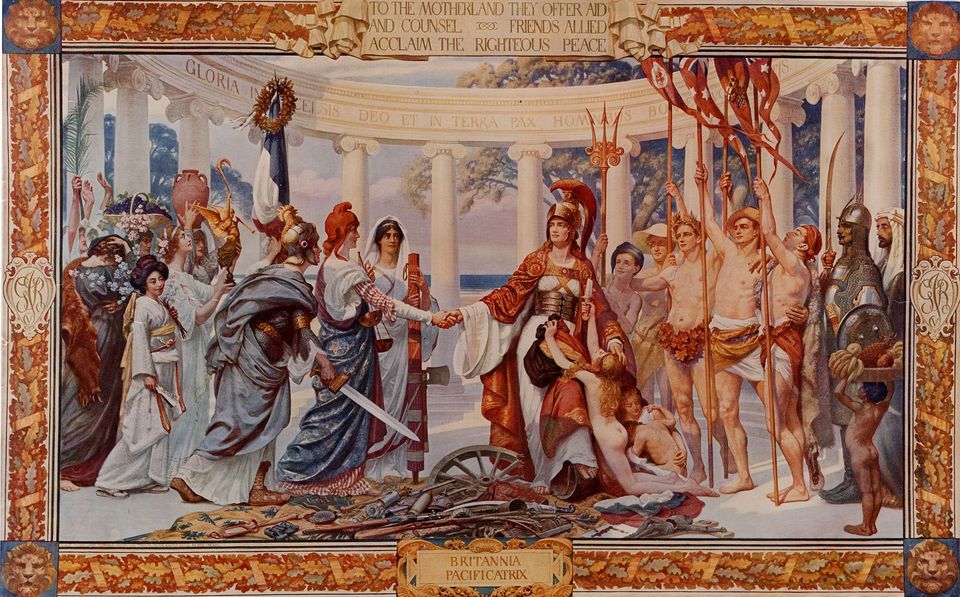 Lisa Nandy, the UK shadow foreign secretary, has objected to an imperialist mural hanging in the Foreign and Commonwealth Office (FCO) in London, which depicts Africa as a small naked boy carrying a basket of fruit. The work is one of five large narrative paintings made by Sigismund Goetze in 1921. The panel, entitled Britannia Pacificatrix, shows Britannia—the symbol of Britain—greeting emblematic figures representing the US.

According to the Guardian, Nandy has written to her counterpart Dominic Raab in the wake of Black Lives Matter demonstrations, “asking him to set out his views on the murals that decorate the Foreign Office grand staircase, the main greeting point for visiting dignitaries”. A spokesman for Nandy confirms that she has raised concerns about the murals.

Goetze’s paintings, which marked the end of the First World War, reflect the expansion of the British Empire. In the right-hand corner of Britannia Pacificatrix stands “a little Swaheli boy”, Goetze said in correspondence, adding that “the boy had been included to remind us of our obligations, and the possibilities, in the dark continent”.

A Foreign Office spokesperson says: “The FCO is examining the statues and artwork within the department with a view to ensure it is more representative of the UK today while preserving history.” There are no plans to remove the contentious statue of colonialist Robert Clive (known as Clive of India) located on King Charles Street outside, which is the responsibility of English Heritage, he adds.

Meanwhile, Prime Minister Boris Johnson has asked Munira Mirza, the head of the policy unit at No. 10, to set up a commission on racial inequality. Mirza was previously the deputy mayor responsible for education and culture during Johnson’s tenure as London mayor.