Reflections on art as an (ineffective) social expression

Jane Jakeman on art since the Arab Spring

The tragic events in Paris in January have brought some of the questions raised in Uncommon Grounds: New Media and Critical Practices in North Africa and the Middle East, a collection of essays examining the relationship between politics and art, closer to home for us in the West. As one contributor, Dina Matar, says: “Art does not just provide a vehicle, or medium, of social expression, it is that expression”, and the Arab Spring that engaged so many young artists in the Middle East, especially in Tunisia and Egypt, needs to be the subject of cultural commentary and record as we make the essential effort to trace the often-painful relationship between art and politics in the Islamic world. This is therefore a valuable volume in a series supported by the Kamel Lazaar Foundation, created by a Tunisian investment banker and philanthropist and dedicated to advancing the culture of the Maghreb, the name for the Arabic-speaking countries of North Africa.

The essays, based on experiences of the revolutionary changes, are varied in their levels of objectivity and clarity, but they have been well edited by an experienced academic, Anthony Downey.

Some contributing artists, such as Wafaa Bilal (who famously implanted a camera into his scalp), already have international reputations; some are members of Mosireen, a media collective formed in Cairo during the anti-Mubarak revolution. Others formed the coalition Gulf Labor that is working to improve conditions for migrant workers on Saadiyat Island in Abu Dhabi. Philip Rizk, a Cairo-based film-maker, describes that media concoction, the “model demonstrator” (that’s the one hurling bricks nicely), and searches for objectivity in filmed reportage of Tahrir Square, although one wonders whether this would ever be possible in such an emotive setting.

Another rather dewy-eyed view is that of Derya Yücel, for whom modern technologies of communication represent a brave new world for art, uncommercialised and permitting a democracy of access that previous art forms did not allow. Yes, it is cheaper to post something online than to construct it out of physical materials, and probably more than six people will see it, but this does not seem to have changed anything in the world of the well-heeled galleristi still peddling their wares at “global” art fairs. Yücel’s contribution makes the reader painfully aware of the gap between the idealistic artist with political values and the greedy market.

Maxa Zoller’s impressionistic account of the whirling speed in the public space of Cairo will strike sympathetic chord for many. She discusses the “commercialisation” of the revolution by companies such as the phone network providers that juxtaposed images of protesters in Tahrir Square with bland political comments, and draws our attention to Mosireen’s video Why Riot? (2013), asking the question: what does the art of revolution, such as graffiti and YouTube features, actually achieve? The difficulty is that there is no final answer, since the hopes raised in Tahrir Square have been twice effectively crushed since the overturn of Mubarak. Indeed, there could never be an answer, since art rarely works directly with any measurable political effect.

Moving from Egypt, Sheyma Buali discusses the narratives created of the Tunisian Arab Spring, including the play Macbeth: Leila and Ben—a Bloody History, a version of Macbeth featuring the overthrown dictator Ben Ali and his wife, the staging of which included music and images of rabid dogs. Buali finds this, in comparison with other works arising out of the revolution, “a more thoughtful, socially reflective and culturally critical look at the Tunisian (and the greater region’s) complacency and passivity in the area of politics”.

A recurring undertone in these pages is the wickedness of the West, especially the decadent capitalism of the Great Satan: Doug Ashford harangues the Guggenheim on human rights, Doris Bittar complains about de facto censoring in the US, and Maymanah Farhat, who is based in New York, recruits Clem Greenberg as a Cold Warrior. Through this collection runs a rather naive knee-jerk denigration of the West which sits uneasily with the security afforded by London, Paris, New York or Berlin to many of the artists who, as their potted biographies reveal, now live and work in the “house of war”, as the Arabic world sometimes calls the Occident. At least Shakespeare is allowed some credit! 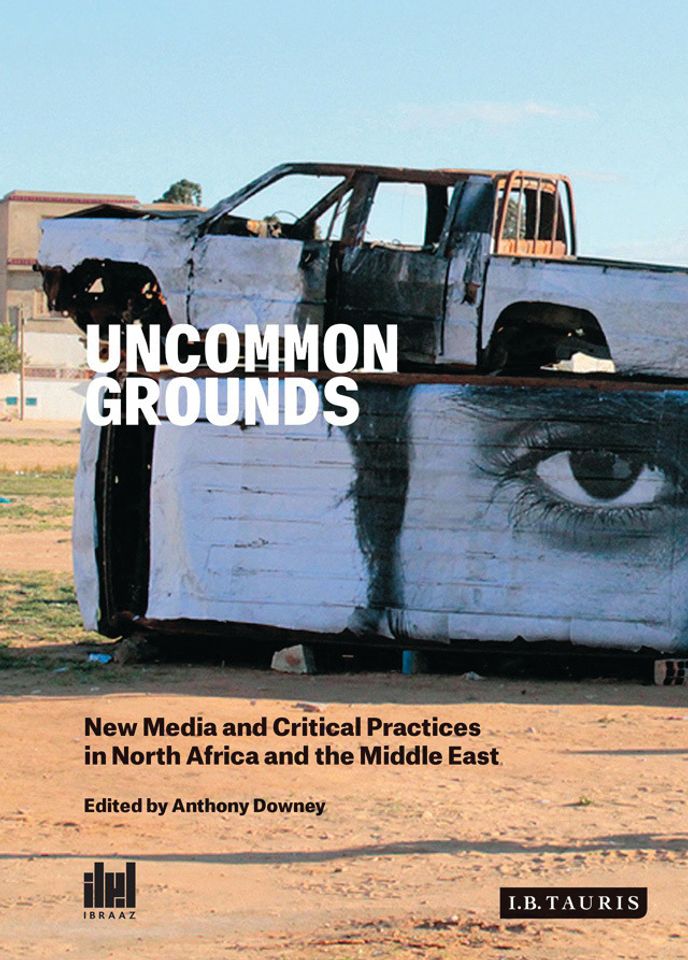 Jane Jakeman has a doctorate in Islamic art and architectural history from St John’s College, Oxford. She has lectured on Islamic art and has travelled widely in the Middle East. She has been on the staff of the Bodleian and Ashmolean libraries and was Librarian to the Oxford English Dictionary. She has a degree in English from the University of Birmingham where her teachers included Malcolm Bradbury and David Lodge. She is also an author and reviewer of crime fiction.