Survey seeks to challenge long-held notions about the movement

The survey of Abstract Expressionism at the Royal Academy of Arts includes an avalanche of works by the principal trailblazers of the post-war movement, which is characterised by bold, gestural brush strokes and expressive, intense content.

Jackson Pollock, Mark Rothko, Willem de Kooning and Clyfford Still are the pillars of the exhibition, which is the first major UK show on the movement since 1959. Nineteen paintings by Pollock, 15 works by Rothko, 18 pieces by de Kooning and 12 paintings by Still feature in the presentation.

“We have monographic galleries reserved for these pioneers of the movement,” says Edith Devaney, the contemporary art curator at the Royal Academy, who co-organised the show. “The other galleries are arranged thematically and include work by other artists.” Significant photographs by Aaron Siskind stand out, including the gelatin silver print Chicago 8 (1948), along with pieces by lesser-known artists such as Jack Tworkov, whose Idling II (1970) is on show. 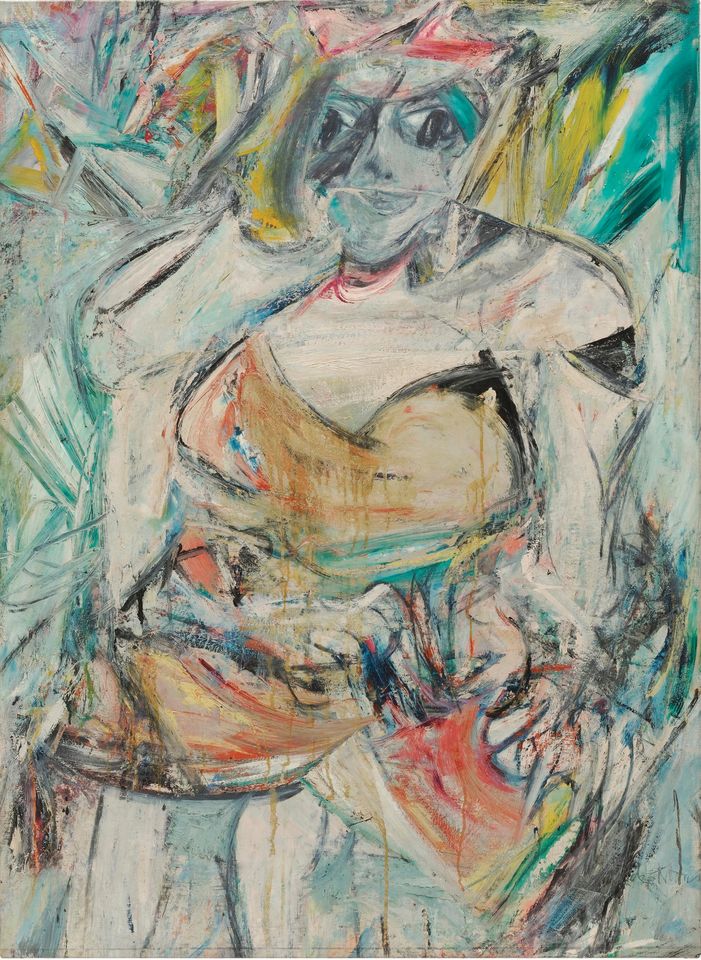 Willem de Kooning’s Woman II (1952) is one of the important works loaned to the Royal Academy show on Abstract Expressionism by “unbelieveably generous” US institutions. Courtesy of the Museum of Modern Art, © The Willem de Kooning Foundation/ARS/DACS

Important works on loan from overseas museums include Pollock’s Blue Poles (1952) from the National Gallery of Australia in Canberra, and de Kooning’s Woman II (1952) from the Museum of Modern Art in New York. Devaney says US institutions have been “unbelievably generous”.

The Clyfford Still Museum in Denver, which holds 95% of the American artist’s work, has loaned nine major paintings including PH-950 (1950). David Anfam, the exhibition’s co-curator, writes in the exhibition catalogue: “Still has emerged all of a sudden and at the eleventh hour among the most varied of the Abstract Expressionists… he was capable of commanding an awesome battery of formats, moods and methods.”

Anfam stresses that Still was tied to the West Coast (the artist taught first in Washington state and later in San Francisco), highlighting that the “New York school [of Abstract Expressionism] fails to acknowledge the following and more: that Pollock and Still were both Westerners to the hilt; [and] that Rothko made his breakthrough to abstraction during 1946 when he was in San Francisco with Still.”

The exhibition also re-examines and challenges established aspects of the movement, namely the art historical grouping of Abstract Expressionist artists into the categories of “colour field”, encompassing painters such as Rothko and Barnett Newman, and “gesture”, personified by practitioners such as Pollock and de Kooning.

“This argument was propagated in the 1950s by critics such as Clement Greenberg and Harold Rosenberg,” Devaney says. “We demonstrate from a 21st-century perspective that it is not logical to consider the work in this way. Artists such as Sam Francis (Untitled, 1956), Philip Guston (Prague, 1956) and Joan Mitchell (Mandres, 1961-62) move across these different disciplines.”

In the catalogue, Anfam writes: “Mitchell ranks high up and just got better and better with age, especially as she began to create sumptuous triptychs and polyptychs in the 1970s. Pollock’s wife Lee Krasner reached an apogee in 1960 when she realised monumental canvases in a single main colour that give Pollock a run for his money in terms of their ambition, intensity and vitality. [Louise] Nevelson was a compelling sculptor and [Barbara] Morgan an excellent photographer. So presenting Ab Ex as a male preserve is a clanger that should be silenced for good.”