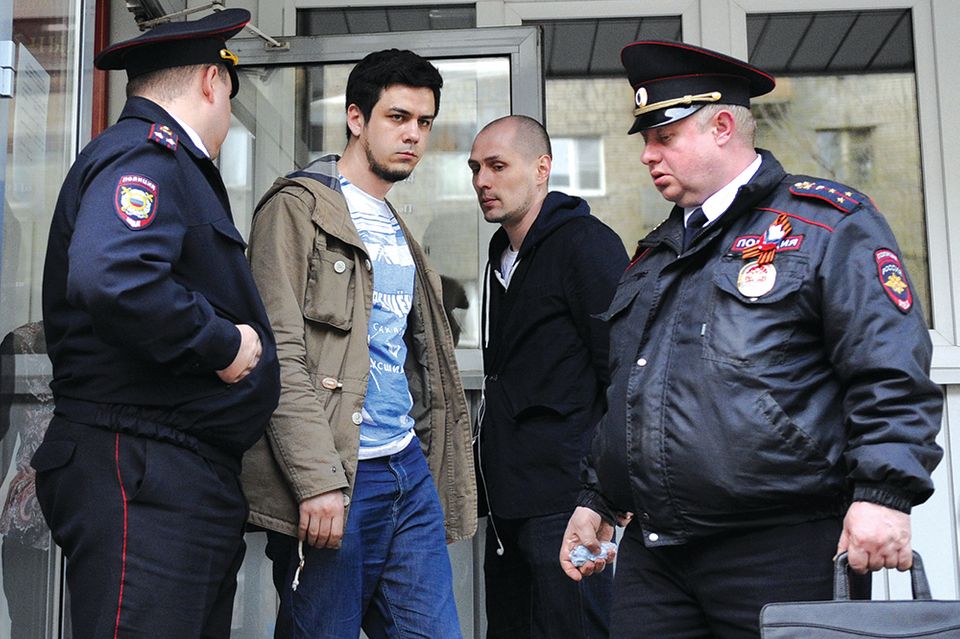 Loskutov was arrested in Novosibirsk in 2016 following a Monstration procession Photo: Kirill Kukhmar/TASS via Getty Images

Artem Loskutov, a contemporary artist known for organising absurdist processions called Monstration in the Siberian city Novosibirsk, says he has been turned down for a US visa due to a conviction for marijuana possession that he alleges was planted on him by Russian police in 2009. His application for a visa waiver has yet to be approved, casting into doubt his planned participation in a ten-day fellowship that begins this week

Loskutov was selected by CEC ArtsLink, which has offices in New York and St Petersburg, to be one of their Art Prospect Fellows along with seven other artists from the former Soviet Union. He was due to travel to the US for a study visit scheduled for 16-25 July, including a public discussion with the Museum of Modern Art’s curator Ana Janevski at the 8th Floor Gallery in Manhattan. Loskutov was also denied a visa to visit Harvard University a year-and-a-half ago.

His latest visa difficulties began on 7 June, the same day that Ivan Golunov, an investigative anti-corruption reporter, was detained by police for drug possession. Golunov alleged that police planted the drugs and charges against him were dropped following a wave of public protests. Loskutov was especially moved by Golunov’s arrest since the reporter had written about the artist’s 2009 arrest.

“I was denied a visa once again because ten years ago I ended up in prison due to weed planted on me by a cop who is now himself in prison for planting [drugs],” Loskutov wrote in a Facebook post. Loskutov told The Art Newspaper that he had been targeted by the policeman, Aleksei Bornikov, “because of Monstration and refusing to be in contact with Center E,” the anti-extremism unit, which targets groups and individuals suspected of anti-government activity. He spent around a month in pre-trial detention before being given the minimum punishment of a fine, but the conviction has had long-term repercussions. “For such a free and democratic American state, I am not an artist invited by a museum or university,” he wrote on Facebook. “I am a drug criminal.”

Loskutov is eligible for a visa waiver, for which he has already applied. Amnesty International and Memorial, a Russian human rights organisation, wrote letters requesting that the waiver be granted. “There was an interview, they accepted the letters [and] asked me to write one too, but returned my passport citing a point in the rules on narcotics arrests,” he says. Susan Katz, the programme director for CEC ArtsLink in St Petersburg, says their fellowship is supported by the State Department through the US Embassy in Moscow and the Trust for Mutual Understanding, and they hope Loskutov will still be able to participate.

Late last week, Loskutov says, as the clock ticked on the trip, he was asked to provide a full translation into English of the 20-page Russian court ruling against him, which he sent today. “I sent in a full translation to the consulate this morning and received a response that the “documents have been received and the case is undergoing further administrative processing.”

Golunov, the reporter, was released on 11 June after Russia’s interior ministry acknowledged irregularities in the investigation and admitted that the reporter had not used or possessed drugs. So far, two police officials connected to the case have been fired. At the same time, police detained hundreds of demonstrators who hit the streets on 12 June, a national holiday, to protest against police abuses. In Loskutov’s case, as well as with others whom Bornikov planted drugs on, convictions have not been reversed even though the police officer himself ended up in prison for smuggling heroin.