Another influential foreign patron is building an art empire in Venice, joining the ranks of the French luxury goods tycoon François Pinault and the Italian fashion giant Miuccia Prada. The Russian gas billionaire Leonid Mikhelson is launching a gallery in the 19th-century Palazzo delle Zattere with a show of Soviet and contemporary art during the opening week of the Venice Biennale (Space Force Construction, 13 May-25 August). Mikhelson’s Moscow-based V-A-C Foundation will run the new space, which will host two temporary exhibitions a year.

The gallery will be free to enter, unlike Pinault’s two Venetian museums, the Punta della Dogana and Palazzo Grassi, and the Prada Foundation space, Ca’ Corner della Regina. “All of our exhibitions and activities at Palazzo delle Zattere will continue to be free of charge and open to everyone,” says Teresa Iarocci Mavica, the V-A-C Foundation’s Italian-born director.

The foundation, which Mikhelson established in 2009, has organised annual exhibitions in Venice since 2010. Mavica says that the Palazzo delle Zattere will not house its own collection of international and Russian contemporary art. “It will be a more permanent space for us to be able to continue our work with new generations of artists in Russia and worldwide, offering them an international platform on which to produce and show their work,” she says. A spokeswoman declined to discuss the future programme.

The inaugural show, organised in collaboration with the Art Institute of Chicago (where a version will travel in October), marks the centenary of the 1917 Russian Revolution. Reconstructions of objects by key Soviet practitioners of the 1920s and 1930s such as El Lissitzky and Varvara Stepanova will be shown alongside pieces by contemporary artists such as Barbara Kruger, Wolfgang Tillmans and Janice Kerbel. The Cuban artist Tania Bruguera will participate in the exhibition’s performance programme ahead of the Biennale’s official opening (Isasthenai, 10-12 May). 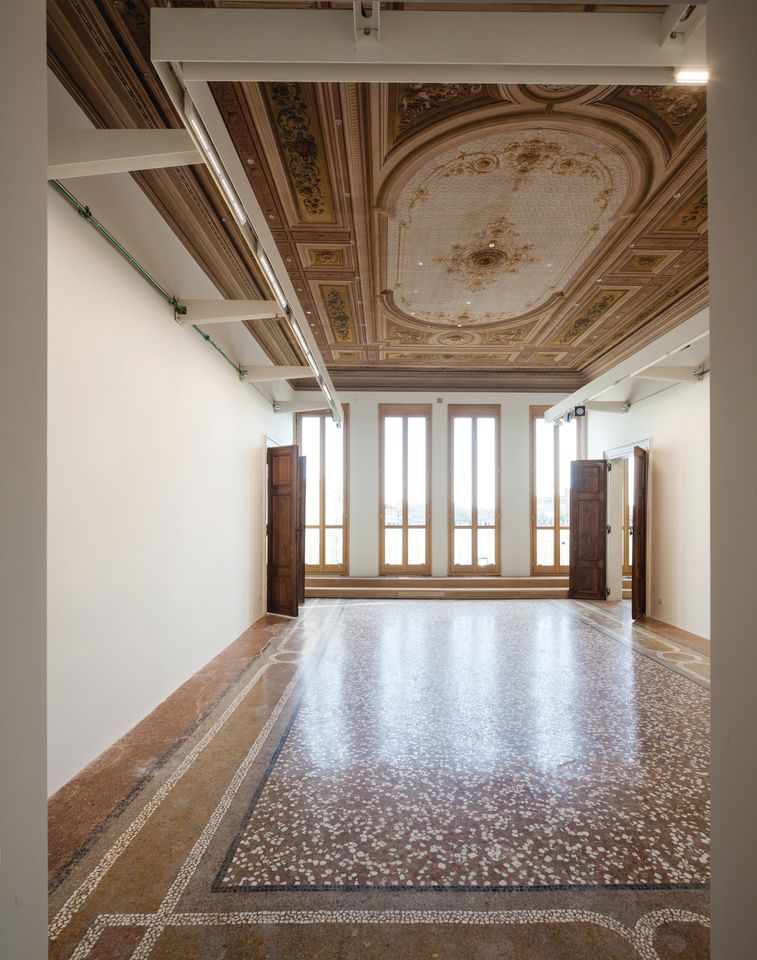 The interior of the 19th-century building (Photo: Fulvio Orsenigo; courtesy of the V-A-C Foundation)

The Palazzo delle Zattere will also support a residency programme for international artists and curators. The four-floor, 2,000-sq.-m building, which has been converted by the Venetian architect Alessandro Pedron, includes six studio apartments on the top floor. The cost of the refurbishment is undisclosed. The foundation has secured a long-term lease on the property from the Venice port authorities.

The Venetian outpost anticipates the opening in 2019 of V-A-C’s Renzo Piano-designed contemporary art centre in a former Moscow power station, known as GES-2. Mikhelson’s global ambitions seem to reflect a broader “Russian desire to establish a new kind of presence in the cultural world, and in the world generally”, says Robert Storr, the former dean of the Yale School of Art, who organised the 2007 Venice Biennale. “From [Fyodor] Dostoyevsky to the oligarchs, Russians have always loved Venice, so it is not surprising that they should want an art world foothold there.”