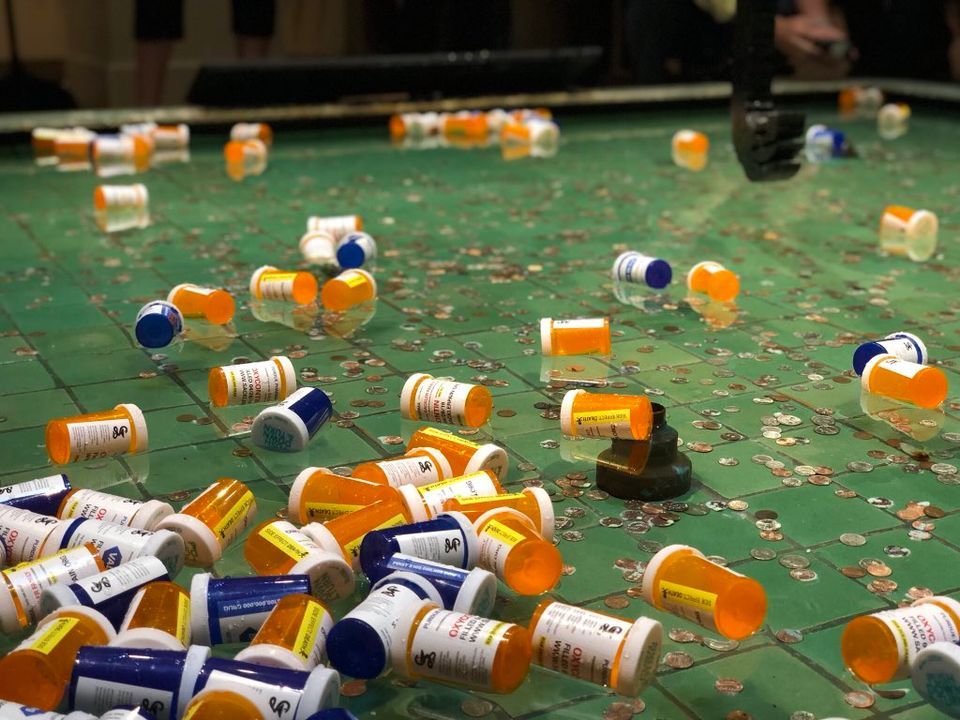 Pill bottles were thrown by protesters into a pool below a sculpture by Xu Bing at the Sackler Gallery in Washington, DC on 26 April 2018 © Via Twitter @gohedgeclippers

The Sackler family, who owns the pharmaceutical company Purdue Pharma and has been generous funders of museums, has reportedly agreed to give up “the entire value” of the privately owned US firm. The offer is the family's latest bid to settle 1,600 cases that claim the Sacklers fuelled the US opioid crisis by allegedly misleading doctors and patients over OxyContin’s addictive properties to boost profits, which they deny.

According to an email sent to NPR yesterday, Purdue still hopes to achieve a settlement, rejecting claims over the weekend that talks had stalled. “The Sacklers have also offered $3bn in cash as part of the global resolution,” says a spokeswoman for Purdue.

On Saturday, attorneys generals said that the Sackler family had rejected two offers and declined to provide new terms. “Negotiations are at an impasse, and we expect Purdue to file for bankruptcy protection imminently,” wrote Herbert Slatery and Josh Stein, attorneys general of Tennessee and North Carolina.

However, in a statement to NPR on Sunday, Purdue said it “believes a settlement that benefits the American public now is a far better path than years of wasteful litigation and appeals. Those negotiations continue and we remain dedicated to a resolution that genuinely advances the public interest.”

Questions have been raised over whether the proposed pay-outs would affect the personal fortunes of the Sackler family, something Purdue’s spokeswoman refutes. “As 100% owners of Purdue, this ... obviously constitutes their personal wealth,” she told NPR.

The US Supreme Court, meanwhile, could hear a case filed by the State of Arizona, which seeks to hold eight members of the Sackler family accountable for transferring around $4bn from Purdue to themselves between 2008 and 2016 when they “were keenly aware that Purdue was facing massive financial liabilities and that these transfers could prevent it from satisfying eventual judgments”, according to the lawsuit.

The family strongly denies Arizona’s allegations, which they describe as “inconsistent with the factual record”.

The artist Nan Goldin denounced an earlier $3bn settlement offer, which could yield as much as $10bn to $12bn for the plaintiffs overall. That deal also called for the Sacklers to give up control of the company, which would be declared bankrupt and transformed into a public trust.

“I’d rather that the Sackler family faced trial and that their personal wealth was clawed back” far more significantly, Goldin said last month, adding, “They’ve ignited a public health emergency and they need to make restitution and they need to be held responsible.”

Goldin has led a campaign against the Sackler family’s involvement in the deadly opioid crisis, staging protests at museums that have received donations from the family, including the Louvre in Paris and the Guggenheim in New York, which is among a number of museums to recently say they will no longer accept gifts from the Sacklers.