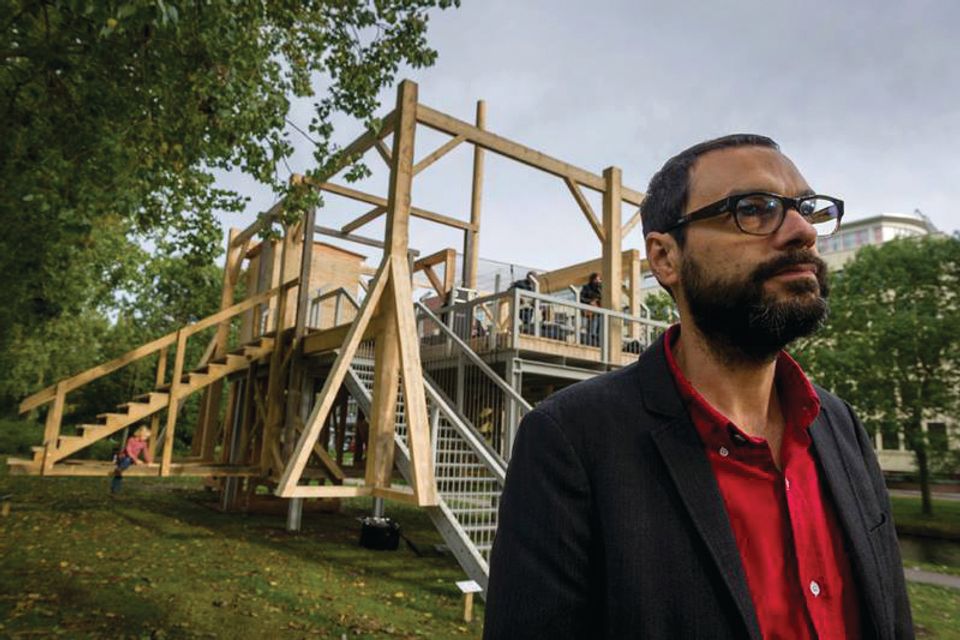 It has been more than six months since the Walker Art Center in Minneapolis faced an overdose of art-world controversy: Native American protests over Sam Durant’s sculpture Scaffold that quickly led to its removal, and Cherokee leaders denouncing the artist Jimmie Durham as a racial imposter when the artist’s retrospective came to the museum. It was clear from a panel this week at the College Art Association conference, formed by the National Coalition Against Censorship, that Sam Durant and Anne Ellegood, the Hammer Museum curator who originally organised Durham’s show, have both used this time to gain some perspective on what happened to them and around them.

Instead of explaining his decision to allow the removal of Scaffold and legally gift it to the Dakota tribe, which he has done elsewhere, Durant used his allotted time on the panel to make a case for Americans to come to terms with its history of violence, including the Native American genocide, slavery, lynching and segregation. “We don’t even know whose land we’re standing on,” he said. “We should know that.” (“We’re on Tongva land,” one audience member called out helpfully.)

We need a truth and reconciliation process, and we need real remedies. We can’t just be sorry. Sam Durant

Durant urged the US to engage in the sort of “truth and reconciliation” processes done in Germany, South Africa and Rwanda. He identified the lack of a national moral reckoning or vergangenheitsbwältigung in the US as the main reason why “grievances keep coming up against white artists who deal with racial issues”.

“I think that social and political problems and issues are being superimposed onto art and debates about art,” he said. “In other words, art is being asked to perform things maybe it shouldn’t perform, which is actual political and social action.”

“We need a truth and reconciliation process, and we need real remedies. We can’t just be sorry.” Otherwise, he suggested, “the grievances going on that we see today expressed towards white artists who are dealing with US history will continue to go on.”

As one example of what could be done, he described the plans of the civil rights attorney Bryan Stevenson to open in April two new institutions in Montgomery, Alabama: a museum on African-American apartheid and a memorial park with monuments marking every US county where lynchings have occurred, with replicas that can be moved and placed directly in those communities themselves.

As for Ellegood, after discussing why she respects Durham’s self-identification as Cherokee, she focused on the responsibility of the individual curator when museum controversies flare up. “When these controversies erupt, there is an imperative for the institution to respond relatively quickly,” she granted, given the 24-hour news cycle. “But I think there have to be opportunities for more nuanced reactions and responses to unfold over time.”

“I think that’s something important for us all to consider, whether the curatorial opinion on the matter put forward needs to align perfectly with the institution, whether there might be opportunities for there to be some tension there.”

In her case, she noted, she took several weeks—and took time to meet with tribal members— before publishing an essay on the subject. “I chose to let a lot of the controversy unfold when I was having innumerable private conversations, including with a group of Native artists who had very strong concerns about the exhibition.

“A large part of my role was to listen, something that I think in general in culture is becoming a lost art form. We all need to slow down and listen, and create platforms for dialogues.” She was clearly talking about platforms outside Twitter and Facebook, which have had a polarising effect on the Durham debate and so many others. One danger of social media is creating “a perception of consensus when in many cases there might not be,” she said, noting that in Durham’s case several of his supporters became fearful of speaking up.

Durant also touched on the divisive nature of social media, sharing a quote by the documentary filmmaker Albert Maysles: “Tyranny is the deliberate removal of nuance”.