Scholars rush to save a 5,000 year-old archaeological site

A new film looks at Mes Aynak, an archaeological treasure that may soon be buried

Saving Mes Aynak, which was screened at the Full Frame Documentary Film Festival in Durham, North Carolina, last month, is the story of an imminent archaeological tragedy in Afghanistan that seems like a fait accompli.

Mes Aynak is a vast site in a mountainous area south of Kabul, near Afghanistan’s border with Pakistan and adjacent to Taliban supply routes. The area is roughly the size of the city of Pompeii in Italy. Archaeologists say it is one of the richest sites in the country, with objects dating back 5,000 years. Excavations were conducted recently with the support of the French government and continue with urgency with a skeleton Afghan crew. Yet more than 90% of the site still remains unexamined.

It is almost sure to be under-examined. Mes Aynak is also the site of extensive copper deposits, which explains why it was a trading centre for centuries. The name Mes Anynak means “little source of copper,” although “little” understates the case. Those deposits are now under contract for extraction by China Metallurgical Group Corporation, a state-owned Chinese mining conglomerate that plans to begin mining the site this year. The copper underneath is said to be worth $100 billion, according to the Afghan government. That is an amount that might make the occasional Taliban attack seem tolerable.

The fight over Mes Aynak is the subject of this documentary film by Brent Huffman. The main narrator of the grim tale is the Afghan archaeologist Qadir Temori. With the help of French archaeologists, Temori and his team have unearthed temples, fortifications, objects and stupas (memorials) that reflect the Buddhist and Hellenistic styles common to the region. But China Metallurgical Group Corporation has built an extensive modern camp for workers and is poised to remove the hills and the ancient remains beneath with modern bulldozers.

To call this a David and Goliath story is like saying $100 billion is a modest incentive. The American archaeologist Mark Kenoyer, a specialist in Afghan and Pakistani cultures, compares bulldozing the site to submerging the city of Atlantis. The French archaeologist Philippe Marquis calls it “the tip of the iceberg.”We are told in interviews with Afghan officials that the proposed mine will enrich the country with $7 billion dollars of economic activity. 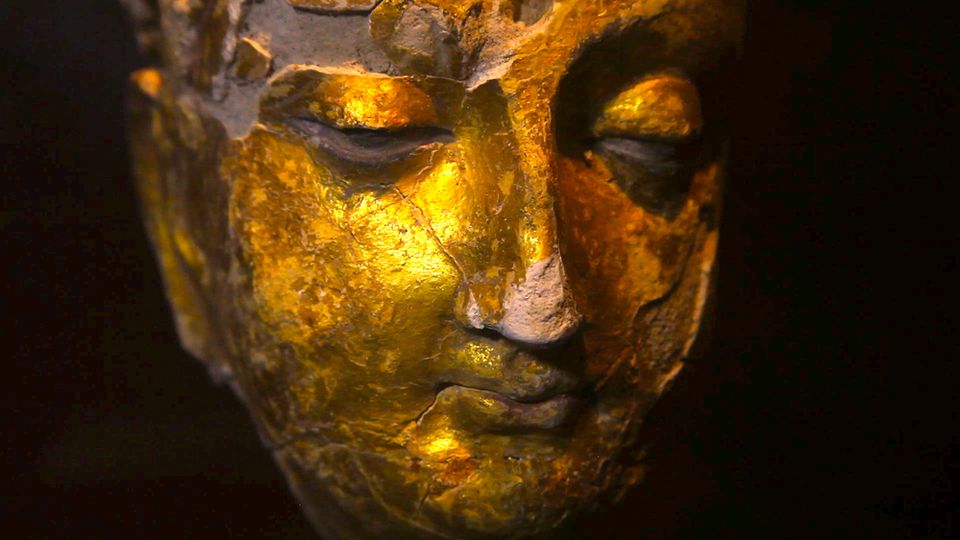 We are also told by former government employees that the minister responsible for the deal— which involved a Chinese payment of some $3 billion to the minister—is living in a luxurious new house. (That official has since resigned and has accused his successor of corruption, Huffman says.)

International protests have not made much difference. Alarmed archaeologists and Buddhists around the world achieved a brief delay by raising their voices, yet the mining seems set to begin.

Saving Mes Aynak does not fit the usual contours of films about art. There are exquisite objects on screen that came from recent excavations, although most of them are too recently unearthed to be conserved and exhibited in a delicately-lit jewel-box museum context. They are hardly the proven treasures that might induce politicians to fight for preservation.

A chilling parallel to this film came in another documentary at the Full Frame Documentary Film Festival. Overburden by Chad Stevens examines the practice of mountaintop removal to extract coal quickly and cheaply over a vast area, with a fraction of the workers required in the conventional deep mining process. Citizens in West Virginia who feared the destruction of their homes and water sources locked horns with a huge coal company, Massey Energy (which has since been sold to Alpha Natural Resources), and coalminers who were fighting for their jobs.

Saving Mes Aynak involves a hauntingly similar standoff. Overburden is the mining term that refers to rock and dirt between the surface and mineral deposits. In Mes Aynak, 5,000 years of culture are the overburden.

Huffman shows grim video of the destruction of the Bamiyan Buddhas by the Taliban in 2002, yet at a time when the destruction of ancient cultures is a stated policy of the Islamic State, Saving Mes Aynak presents us with a different crisis: the horror of business as usual. Under governments where conservation doesn’t count for much, the race for resources runs faster than rescue archaeology.