Science fiction in the Holy Land

Can science fiction help solve the Israel-Palestine conflict? For the London-based artist Larissa Sansour and her partner and main collaborator Søren Lind the answer could be written in the stars.

Sansour, one of Palestine’s best-known artists, uses video and photography to reimagine current events in the Middle East. The political nature of Sansour’s works has courted controversy: she was removed from the shortlist for the 2011 Lacoste Prize, she claimed for being “too-Palestinian”. The prize was cancelled that year.

Her best-known works include A Space Exodus (2009), a video that follows a fictional Palestinian woman astronaut’s landing on the moon, and Nation Estate (2012), a short film that envisages a dystopian Palestine as a skyscraper, with each floor representing a Palestinian city.

In her latest film, In the Future They Ate From the Finest Porcelain (2015), Sansour reflects on a tendency in the region to base political legitimacy and land entitlement on archaeological evidence. Together, the films form a sci-fi trilogy on the Middle East. The films will be part of several exhibitions taking place in the UK this year, kicking off at the New Art Exchange in Nottingham this week (15 January-13 March).

The Art Newspaper: Your new film In The Future They Ate From the Finest Porcelain combines sci-fi and archaeology, two seemingly conflicting themes. What inspired the film?

Lind: In the Future technically springs from Nation Estate by using the bowls that we made to be used in the film. After Nation Estate we became interested in archaeology. We thought that if myth is the basis for the narrative and history in the Middle East, and Israel and Palestine in particular, then what’s stopping us from also creating a myth and digging for the evidence to support it archaeologically? So the film follows a Palestinian who decides to manipulate the age of these bowls.

Israel is the only country I know whose newspapers treat archaeological discoveries as front-page stories. If something is found it means something else for the present.

You have said that you use the genre of sci-fi as a way to create surrealist scenarios that pertain to the real world.

Sansour: I have done a couple of short documentaries in the past and have always found it a problem that in this form you have to take on the role of analyser. This power dynamic is not in favour of Palestinians. I think when you do something such as sci-fi, it catapults Palestinians into a completely different domain—they become people with autonomy; they are high tech; they have a cool factor; and they are talking about things that we associate with progress. But also I think it’s really difficult to talk about what’s happening in Palestine without becoming surreal.

Lind: A lot of people who are doing work about Palestine—Larissa and I included—tend to become almost employed by reality. You immediately feel an enormous responsibility to represent well, fairly and in detail. This often ends up making a mirror image of reality, but where are the comments, suggestions, ideas or solutions? Sci-fi does the exact opposite—it says we are projecting and forecasting this and we are adding a sprinkle of absurdity in there too. And all of sudden, it’s a pathway to a new vision. 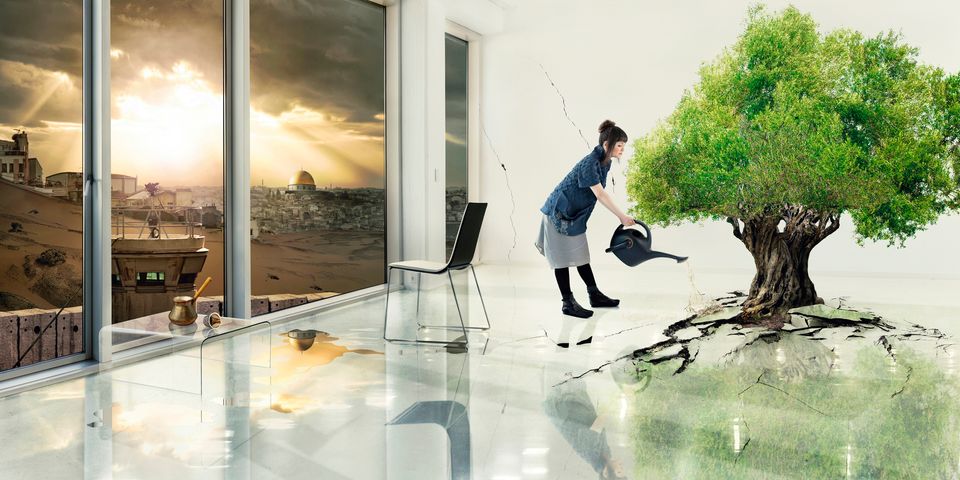 This is the first time you haven’t featured in your own film, Larissa. How come?

Sansour: Yes, I chose not to be in it so I could focus on directing. I don’t like being in front of the camera but I always had to in the past because of the cost of hiring actors and actresses. Then it became like a signature and a performative aspect of my work. In this way it was hard to decide not to be in it but I’m really glad I did it.

What happened with the Lacoste Prize in 2011?

Sansour: I didn’t apply for the prize but was just called out of the blue by someone from the Musée de l’Elysée [which organises the prize]. I was one of eight photographers chosen and the theme was La Joie de Vivre. They chose me apparently because they wanted an ironic take on the idea. Then, just two days before the museum announced the nominees, we got a call from the director of the museum. He said he had good news and bad news: the bad news was that the CEO at Lacoste thought I should be removed from the competition. The good news was that they wanted to offer me a solo show in exchange for my silence on the matter. Not only were they censoring me but they were blackmailing me too. I refused to accept and eventually they backed down and cancelled the prize.

The cancellation of the prize is often talked about as a victory over artist censorship. How do you feel about it now?

Sansour: I always say that it was a blessing and a curse. If I had not been well known before the scandal I think it would have been very damaging. But I also got a lot out of it. Many people, particularly from the UAE, started buying the sketches I had made of Nation Estate and they sold like mad. This way I was able to raise a lot more money to fund the project. A lot of galleries wanted to represent me although I didn’t choose any of them in the end. I was even invited to the UN a few times to talk about human rights and freedom of speech!

Lind: About six months later we were offered a show at Anne de Villepoix [gallery] in Paris, which turned out to be a much bigger and better offer.

What do you have coming up next?

Lind: The Imperial War Museum (IWM) acquired Nation Estate in a joint purchase with Wolverhampton Arts [& Heritage, the public gallery based in the Midlands] as part of an initiative to collect art that reflects on the conflict in Israel and Palestine. The IWM is scheduled to show it and possibly do a double feature with another institution in late 2017, but it hasn’t yet been confirmed.

• In The Future They Ate From the Finest Porcelain on tour: