Susan Jenkins in praise of Roubiliac

Malcolm Baker’s latest book, The Marble Index: Roubiliac and Sculptural Portraiture in 18th-century Britain, is a landmark piece of scholarship that draws on much new research into 18th-century portraiture and sculptural practice in England. It offers a revelatory re-examination of the changing significance and appreciation of sculpture in Enlightenment England.

The title is a quotation from William Wordsworth’s The Prelude, in which the poet describes Louis François Roubiliac’s 1755 statue of Sir Isaac Newton in the ante-chapel of Trinity College, Cambridge, as “the marble index of a mind”. Baker analyses the development of such statuary from 1720 to 1770 and demonstrates its impact on the sculptor’s contemporaries. In the first part of the book, the author presents the genres of statuary and sculpted portrait busts in their widest context, while in the second he offers case studies through which he seeks to engage with two interlinked contemporary phenomena: “one being the aestheticisation of the sculptural portrait… the other being the commodification of the image… as part of a wider luxury economy”.

Baker has already contributed substantial scholarship on the career of French immigrant sculptor Roubiliac, who came to England to work in 1730. In The Marble Index, he examines Roubiliac in the context of the work of his contemporaries, including John Michael Rysbrack, Peter Scheemakers and Joseph Wilton. As part of this study, Baker asks (and answers) a broad range of questions about the changing significance, setting and proliferation of the portrait bust and statue in mid 18th-century England. He compares the painted with the sculpted portrait, evaluating the way in which the “fictive pose” of a two-dimensional work differs in its relationship with the viewer from that of the three-dimensional. He also explores how Enlightenment ideas concerning the self and personal identity led contemporaries to view the portrait bust as a representation of the inner life of the sitter.

In the second part of the book, Baker uses the case studies to assess the ways in which sculptural portraiture helped to construct narratives of family and national histories and to define the image of English Enlightenment figures. The author focuses on the role of Roubiliac, whose hand fashioned the definitive images of sitters such as Newton, Handel and Pope. One such case study considers Roubiliac’s statue of Handel unveiled in Vauxhall Gardens in 1738, here described as “one of the first full-size statues to represent a creative figure”. Another considers Roubiliac’s role in fashioning the image of poet Alexander Pope. The ne plus ultra for Baker is the series of portrait busts of “worthies” commissioned for Trinity College, Cambridge between 1751 and 1766, ten of them from Roubiliac. For the author this series provides a “telling register of sculpture’s centrality within British culture at this period”.

In The Marble Index, Baker has produced a study which evaluates its subject from every angle. He weaves his themes of the new “aestheticisation of the sculptural portrait” and “the commodification of the image” throughout the book, but effectively contextualises 18th century sculptural practice within a much wider set of issues. He succeeds in demonstrating that “sculptural portraiture was no longer a backward-looking mode of representation, associated primarily with noble patrons, but a sensitive and vivid register of Enlightenment concerns and sensibilities”. In short, Baker shows how sculpture has adapted itself and become relevant to the modern world. 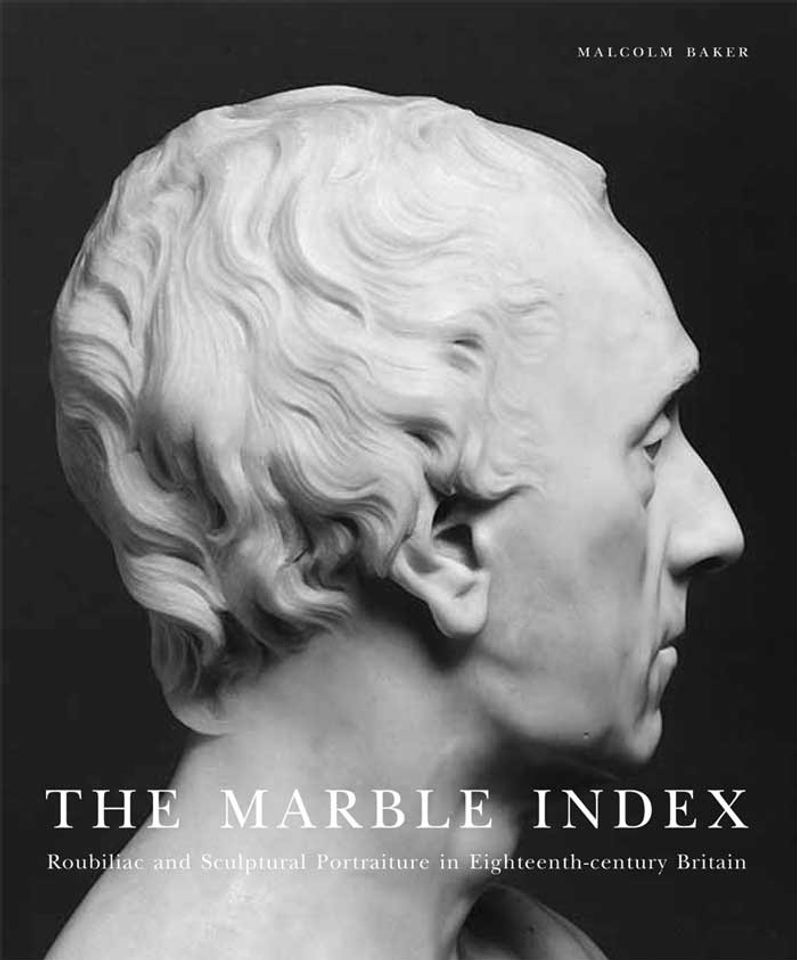 The Marble Index: Roubiliac and Sculptural Portraiture in 18th-century Britain

The Marble Index: Roubiliac and Sculptural Portraiture in 18th-century Britain

Susan Jenkins is a curator and researcher who has written extensively on 17th- and 18th-century fine and decorative arts. Her book, Portrait of a Patron: the Patronage and Collecting of James Brydges, First Duke of Chandos, 1674-1744 was published in 2007.