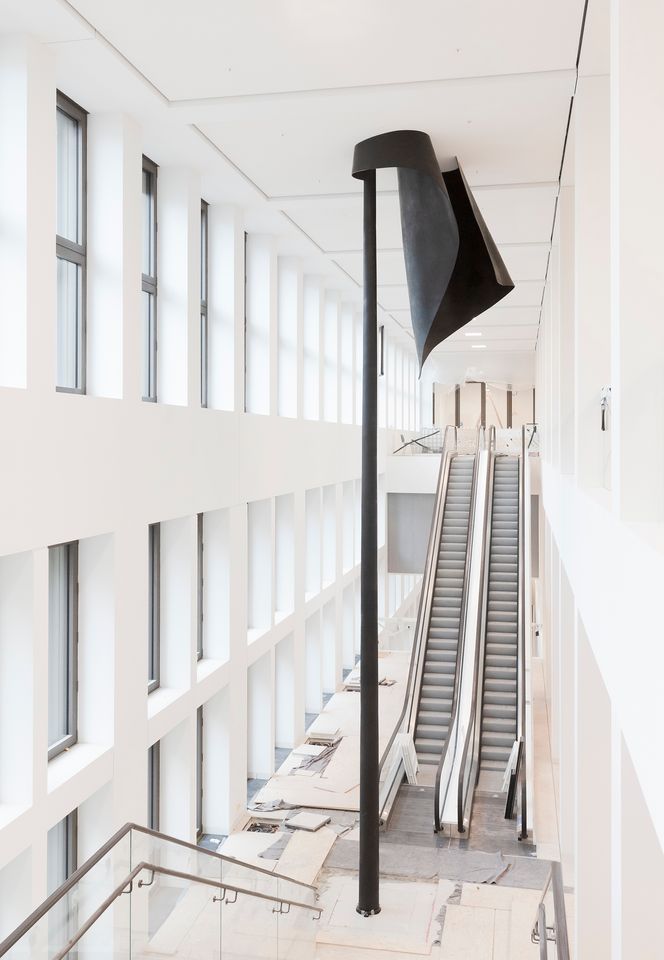 The bottom half of Kang Sunkoo's sculpture Statue of Limitations, which has now been installed in Berlin's much-anticipated Humboldt Forum Photo: © SHF / David von Becker

A sculpture referencing Germany's colonial past and issues around the restitution of artefacts has been installed in the Humboldt Forum, a new museum complex being built in Berlin. The bronze work—a black flag at half-mast—is by Kang Sunkoo, an artist who has collaborated with Ai Weiwei, and was chosen after an open call for designs.

Called Statue of Limitations—a play on words referring to legal statutes that can serve as an obstacle to restitution claims—the black patinated sculpture is separated into two parts. While the 11-metre tall lower half of the flag is in a stairwell of the Humboldt Forum between the second and third floors, the upper half will be placed off-site in a square in the so-called African Quarter of the Berlin's Wedding district making a direct link to the city's colonial history. The sculpture in the square will be a temporary installation to celebrate the inauguration of the museum. It will be installed once the two floors of Humboldt Forum finally open to the public, probably in spring next year. “The Humboldt Forum is the cultural manifestation of a contemporary society dealing with its past and the reflection of both its own self-perception and its world view,” Kang says in a statement, adding that his wish is for the Humboldt Forum “to remain self-critical, embrace change and to live up to its responsibilities”.

Hartmut Dorgerloh, the director of the Humboldt Forum, said in an interview with Die Zeit newspaper last week that the museum complex, in a reconstruction of Berlin’s royal palace, will open later than the scheduled date of September because of delays caused by the coronavirus lockdown. Some foreign construction workers were unable to get to the site and deliveries including tiles from Italy and components from Turkey were held up, he said. Planning for exhibitions was also hampered—a show called Elephant, Man, Ivory in cooperation with the National Museum of Kenya will not open before spring 2021, he adds.

The delays will lead to additional costs, Dorgerloh said. He hopes that some of the new complex will open this year, including exhibitions on the ground floor and first floor. He expects the entire complex to be open by the end of next year.

The new culture complex will house Berlin’s non-European ethnological collections and Asian art collections; a permanent city history exhibition; several spaces for temporary exhibitions; and a “Humboldt Laboratory” run by Humboldt University. It aims to stage around 1,000 events annually and expects to welcome as many as 3 million visitors a year.